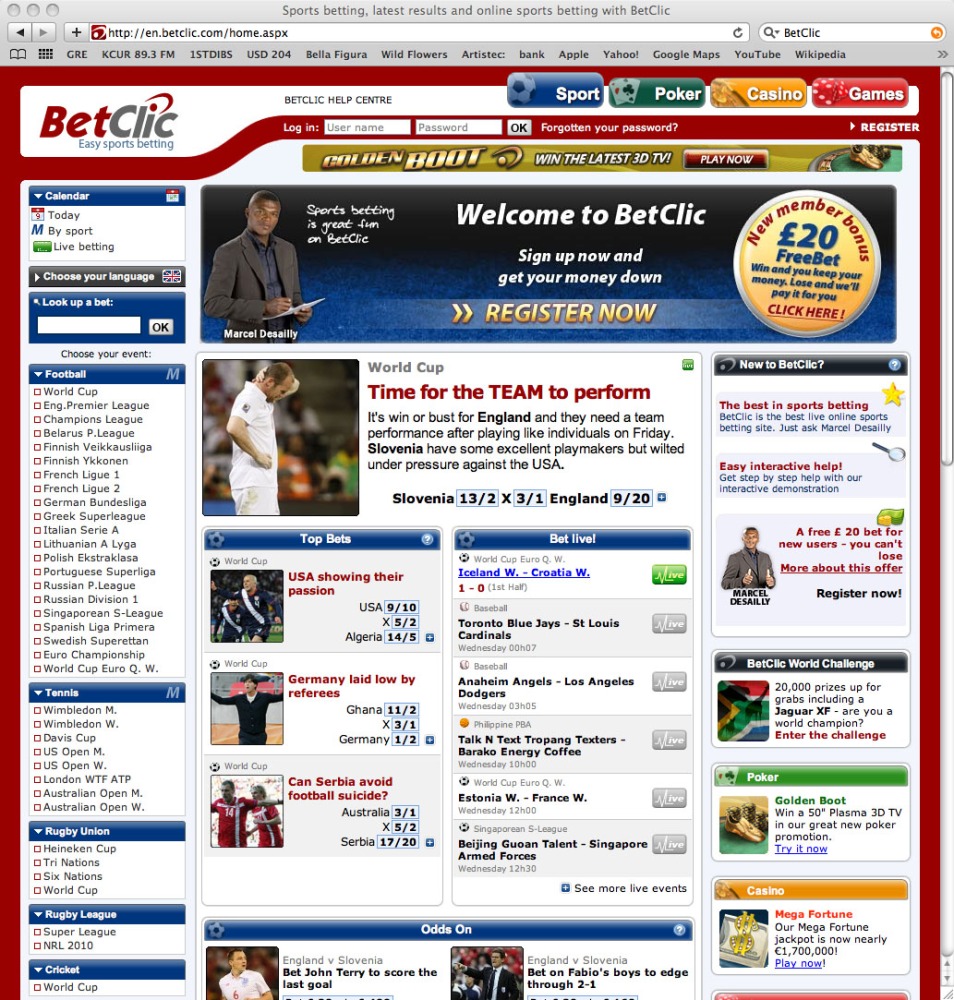 It didn’t matter that the operators were licensed by other governments within the European Economic Area, an expanded commercial treaty zone that includes non-E.U. jurisdictions like Malta and Gibraltar. It didn’t even matter that the subjects were elsewhere in Europe than France when the arrests were carried out. The government was determined to exercise its sovereign rights, and it looked like online gaming was going to be the exclusive province of the French monopoly gaming operators for at least the foreseeable future.

Change Comes Swiftly
And then suddenly, in April 2008, French budget minister Eric Woerth came with the announcement that the online betting market could open up for a testing period within the next two years. At the time the move was said to have come from the Sarkozy government, as President Nicolas Sarkozy had previously indicated he was open to experimentation in the online betting market. The plan that gradually came together called for online betting companies to be licensed by the French authorities and be subject to the same rules and regulations as the then-monopoly horse-race betting operator PMU.

Now, last month, just in time for the World Cup football tournament, the government issued the first 17 licenses to commercial companies taking bets online for sporting events and horse racing, and for companies offering online poker. In fact, several of those licenses have been awarded to the companies whose CEOs were arrested not so long ago.

The licenses were awarded by Arjel, the independent authority created for the newly sanctioned sector. Arjel is an acronym for the French words that basically translate to “online gaming commission,” L’Autorité de régulation des jeux en ligne, for those who need to know. Each license is valid for five years, although Arjel has the power to revoke a license, given proper cause. Each activity engaged in by a company requires a separate license, so a company offering sports betting, wagering on horse racing and online poker would need to have all three licenses. The fee for an individual license is €5,000, for two licenses €8,000 and for three licenses €10,000.

At present, the regulations allow only for sports betting, horse racing and online poker. Online casino games and slot machines are not permitted. That situation could change in the future, but no additional activities are expected to be introduced during the first 18 months of the new situation.

One of the controversial aspects of the regulation is the tax rate on sports betting and horse racing. Unlike other jurisdictions, where a tax of a few percent is applied to bets won by the operator, the French law specifies a tax that works out to about 8.8 percent of the total amount wagered. In other words, the house is paying tax on money it doesn’t win as well as on money it does win. Poker is saddled with only a 2 percent tax rate.

Sports betting for the licensed operators was in place for the start of the World Cup football tournament. Poker was scheduled to debut at the end of June.

Four Goals
The law has been designed to satisfy four basic objectives: to guard against compulsive gambling and protect minors; to assure the integrity, reliability and transparency of gaming operators; to guard against fraudulent or criminal activities and prevent money laundering and the financing of terrorism; and to oversee the balanced and equitable development of various types of games to avoid the economic destabilization of activities dependant upon them.

Provisions to protect the player from harm due to compulsive gambling play a very prominent role in the legislation. Whole sections of the law are devoted to descriptions of measures to be taken by the operator, from the inclusion of warnings on the gaming site about the risks of compulsive gambling to the presence of mechanisms by which a player can request exclusion or voluntary limits on play. A detailed description of the content and display style of these warnings is included in an order from the minister of health.

Operators are not allowed to offer credit to players, nor list direct or indirect third-party sites from which credit can be sought.

To ensure that player protection is taken seriously, an operator must prepare and submit to Arjel an annual report describing actions undertaken to promote responsible gaming and combat compulsive gambling. Likewise, a report must also be submitted each year on actions taken to deter fraudulent or criminal activities, money laundering and the financing of terrorism.

When first granted a license, the operator has six months in which to provide Arjel with a certification as to the systems employed to identify, register and keep track of players and their accounts, monitor and record all gaming events, wagers and related data, and keep records of changes and maintenance of hardware, platforms and software employed in the operation of games. The exact nature of the information required and method of storage is specified in a decree from the Counsel of State. To perform the certification, the operator chooses an independent agent from a list approved by Arjel.

To counter conflicts of interest, no one employed by or associated in any way with the online operator is allowed to participate in the gaming or wagering activity.

Licensed operators are allowed to advertise their products in the usual manner, but within specified parameters. Any commercial communication promoting gaming must include a message warning against compulsive gambling, as well as details on where to find information and assistance for related problems. Advertising via any medium intended for consumption by minors, or inside a venue in which material that appeals to minors is being shown or displayed, is prohibited.

There are stiff penalties for operators who do not adhere to the advertising regulations. Fines start at €100,000 for certain infractions of the law with regard to minors, and the court can assess a fine equal to four times the amount spent by the operator on the illegal promotional activity in question. Certain civic groups are also empowered to exercise these same measures on behalf of a plaintiff.

Tough Enforcement
As of the middle of June, 11 operators had received licenses to provide online betting or gaming to the French public. Arjel had received a total of 35 applications. However, estimates put the number of unlicensed—and therefore illegal—operators active in France at some 20,000. The new law provides serious penalties for those convicted of operating illegally.

Any individual without a license who offers an online bet to a member of the public can be fined €90,000 and imprisoned for three years. If such an offer is made by an organized group, the punishment can reach €200,000 and seven years in prison. Moreover, the authorities may confiscate personal property if directly or indirectly involved in the commission of the offense, and close down the business for five years or more, including permanently.

To combat illegal activity, authorized police and other agents are allowed to use pseudonyms while placing wagers or playing online games, in the course of gathering evidence. They are also allowed to obtain, maintain and transmit data on suspects relating to their investigations. Agents are not allowed to entice or encourage operators to break the law with regard to taking bets from minors.

Among the companies who received license in the first round of awards are two brands in which Austrian firm Bwin is involved. The companies are Bwin Entertainment Services, a wholly owned French subsidiary of Bwin operating at the site bwin.fr; and SAjOO, a joint venture with French media group Editions Philippe Amaury, operating at sajoo.fr.

Norbert Teufelberger, co-CEO of Bwin Interactive Entertainment, said of the development, “We are pleased that, following Italy, another country has followed the call for a clearly regulated and transparent market. The present law is a great first step. There are still a few more miles to go on the road toward establishing legal conditions that warrant fair competition in France. We will be working closely together with the French authorities in order to take these developments forward.”

Teufelberger’s enthusiasm for the French system is undoubtedly stronger now than it was in September 2006. It was then that he and Bwin co-CEO Manfred Bodner were arrested in Monaco, for taking bets from French residents.

Another outlaw-turned-legitimate-businessman is Petter Nylander, CEO of Unibet. Nylander was arrested by Dutch authorities on a French warrant, while waiting for a flight to the U.K. in October 2007. Unibet now has an agreement with French operator France Pari, which has a license for sports betting. France Pari is now providing its service to Unibet clients in France.

Unibet also has a signed agreement with Ongame to provide poker to the French market, and a letter of intent with Zeturf for horse racing. Both poker and French horse racing are expected to be available on Unibet.fr by the end of Q3 2010.

Said Nylander in early June, “We are very happy to announce that, although we have not yet been granted a French license, we can still provide our customers with a sport betting product ahead of the upcoming World Cup in football.”

Arjel is required to perform a thorough review of the online gaming situation 18 months from the introduction of the law. With 20,000-plus unlicensed operators still active, it will be interesting to see if the French players gravitate to the legal operators or remain loyal to whoever has been serving their needs until now.