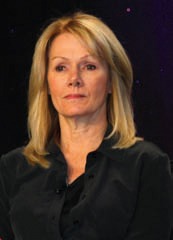 After months of back-and-forth in a bitter proxy fight initiated by former Chairman and CEO Charles Mathewson, shareholders of slot manufacturer International Game Technology re-elected seven of the company’s eight current directors, while electing one of the three nominees to the board proposed by a dissident shareholder group.

At the company’s annual meeting last month, shareholders elected Daniel Silvers, president of New York’s Ader Investment Management, to the IGT board. Silvers was one of a slate of three nominees proposed by Silver’s boss, veteran gaming stock analyst Jason Ader. The other two of the dissident group’s nominees, rejected by shareholders, were former insurance industry executive Raymond J. Brooks and Mathewson, who has been critical of current IGT management, and particularly current CEO Patti Hart (above), for what the Ader group has called negligence of core IGT products in favor of online and social gaming acquisitions. Ader and Mathewson control 3 percent of IGT’s outstanding shares.

Hart was re-elected to the board along with current Chairman Phil Satre and former Nevada Governor Bob Miller, who, the Ader group had pointed out during the proxy battle, are the only two current board members with gaming industry experience.

The split decision allows both sides to claim a partial victory in the bitter proxy fight, which saw Hart and the Ader Group exchange broadsides over the direction of the slot-making giant. The Ader Group claimed IGT’s market share had eroded because of costly non-core investments in social media and online gaming platforms, while Hart criticized Mathewson for an “outmoded” vision, and for maintaining a “lavish lifestyle” on the company dime after his 2003 retirement and installation as chairman emeritus.