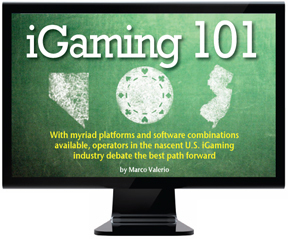 The “software debate” is a pervasive one in online gaming, especially in the U.S. environment today. Players like to debate which software is better to play on, and operators need to figure out which platform is best suited to their company.

Ever since online gaming went live in the U.S., first in Nevada then in Delaware and New Jersey, a veritable flood of online gaming platforms, old and new, has inundated the American gaming landscape.

More are inevitably on the way.

When talking about user-facing distinctions, the software debate is largely dictated by online poker, where most of the features are immediately on display. Conversely, online casino platforms are usually more back-end-oriented, with many of the games sourced from third parties such as IGT and SHFL.

Upon preparing to launch their online gaming offerings following regulatory approval, U.S. casinos were tasked with a decision to make: either develop their own online platforms from scratch—a lengthy process, but with its benefits—or enter into an agreement to use any of a variety of ready-made solutions.

Most U.S. iGaming entities so far have opted to go with the latter. Ultimate Gaming notably stuck by the former.

Some, like Caesars Interactive, are currently trying to have it both ways, as we shall soon see.

Roughly half a dozen different software platforms are now in play in the American market. These encompass both poker and casino games. They are 888, Amaya, PartyPoker, GameSys, Ultimate Gaming and GameAccount Network.

Keeping track of which casino property is using which platform can cause a headache. It obfuscates the view further that several casinos have different software agreements for online poker and online casino games.

To understand the evolution of online gaming systems in the regulated U.S. market, a good place to begin is by looking at Nevada, not just because it was the first U.S. state to introduce regulated real-money online gaming, but also because the two primary—and to date, only—competitors in that state each exemplify radically different approaches to online gaming software selection.

Ultimate Gaming acquired software developer CyberArts in 2011 with the goal of developing proprietary, in-house iGaming software. Caesars Interactive, on the other hand, stood to benefit from a pre-existing relationship with 888 Holdings to “borrow” the online poker software from the Gibraltar-based internet gaming operator.

Euphoria was high when Ultimate Poker launched in Nevada in April 2013, but most reviews of its software back then were not favorable. The platform that CyberArts spent little over a year perfecting as much as possible was simply not up to date with some of the systems that had been around for over a decade.

Ultimate Poker’s initial look and layout was pretty bare-bones, but more gravely, it lacked numerous features which American players had come to take for granted in an online poker product. For example, multi-tabling—the ability to play on more than one table at once, which is supposed to be a big advantage of online poker over brick-and-mortar—was problematic on Ultimate Poker in its very beginnings.

Table windows could not be resized, making it difficult to arrange multiple ones on a computer screen. In addition, the tables did not “pop up” in a way familiar to most players when it came their turn to act.

Ultimate Gaming personnel themselves admitted that the software was still in a very preliminary stage, and that improvements would be added over time based on user feedback. This is a promise Ultimate Gaming has lived up to, in great part thanks to its decision to create its own software, which enables the company to make adjustments with relative ease.

A few months after the release of Ultimate Poker, Caesars Interactive launched its own real-money online poker product in Nevada, WSOP.com. Caesars did not have to create its own software from scratch. The company used the same software developed and employed by 888poker, which has been operating since 2002.

The advantage that 888poker’s decade-old software had over Ultimate Poker’s much younger one was very evident. Unlike Ultimate Poker, WSOP.com was Mac-compatible, allowing more users to play. It easily permitted the resizing of tables (Ultimate Poker eventually caught up to this too). The table “lobby”—the area of the online poker client where users get to view which games are running—could be sorted much more easily on WSOP.com, and included more filters.

Waiting lists for full tables were another edge that WSOP.com’s software had over its sole Nevada competitor.

But because Caesars Interactive does not own its own software, it cannot easily amend or adapt it without first having to go through an entirely separate company. This trade-off is one of the most important consequences resulting from the decision to either create one’s own software or adopt somebody else’s.

Its impact extends beyond the merely technical. Online poker players in Nevada and in New Jersey have lamented the lack of Ultimate Poker’s software features compared to its competitors. But at the same time, it is generally acknowledged that Ultimate Poker’s customer service is superior to the rest, since the staff enjoys an unparalleled closeness and access to the product that players experience.

This fact is not lost on Caesars Interactive, which has been known to be aspiring to something better. Although the company currently makes use of 888poker’s software, it is concurrently in the process of developing a more self-stylized proprietary platform with the help of French company Lucien Barriere Poker.

On to New Jersey

The software platform situation in the U.S. becomes increasingly colorful and complex when we look at New Jersey, another state that has legalized and launched online gaming. The state’s decision to allow a wider suite of online casino games beyond poker created a demand for additional, more diversified platforms. In addition, a greater number of online gaming interests chose to go live in New Jersey from the get-go, seeing a greater opportunity for revenue than in Nevada, a much smaller state.

888, which continues to supply the online poker technology to WSOP.com in New Jersey, is also its own independent operator in that state, thanks to an operational license lent to it by Caesars, which possesses a few to go around.

Several platforms beyond 888 and Ultimate Gaming have come into play in New Jersey.

On the online casino side, Caesars Interactive operates CaesarsCasino.com, whose software provider is Amaya Gaming, not 888.

When two online poker platforms are the same, there is the possibility to merge player pools. This could eventually happen between Betfair and Golden Nugget, although the latter has yet to offer online poker in New Jersey.

A large-scale plan to combine player pools via the same platform is also at the heart of the All American Poker Network (AAPN), with primary backing by 888poker. It was expected that Wynn Interactive would enter the New Jersey online gaming market and conjoin its online poker offering with the AAPN, but as recent news reports indicate, Steve Wynn has changed his mind about going through with his online gaming plans. The AAPN reportedly plans to introduce a client in Nevada as well, and liquidity agreements permitting, an interstate combination of online poker players could one day become a reality.

Rounding out the list of sites to which Amaya offers its online casino services is BorgataCasino.com, owned by the eponymous Atlantic City destination. But here we have one of the most notable splits between online poker and casino games.

Borgata’s online poker client uses PartyPoker software, itself a tested, popular platform with prior international experience, akin to 888poker. PartyPoker doesn’t excel only in its software platform, but also in its seasoned, experienced personnel. This combination of qualified manpower and inveterate software may help explain the success that PartyPoker/Borgata (as they are often jointly referred to) has had over all of its competitors in New Jersey, according to the state Division of Gaming Enforcement’s most recent revenue report.

GameSys is an additional force to be reckoned with in the U.S. online gaming landscape. The U.K.-based gaming technology company is partnered with Tropicana in New Jersey. Tropicana/GameSys have yet to unveil an online poker product, but this is expected to be in the works, especially in view of the strong showing that online poker has laid claim to in the latest New Jersey revenue reports. (For all of the New Jersey online gaming sites that offer it, online poker accounted for almost half of total iGaming revenue since launch.)

Analysis linked to GameSys’s acquisition of Virgin Casino (linked to the popular Virgin brand made famous by Richard Branson) has spurred reports that the two companies are now working on developing an original online poker platform in-house.

In surveying American online gaming, it would be unfair to omit the state of Delaware just because of its small size. But owing to the First State’s lack of mention in this article heretofore isn’t so much its comparatively miniscule population size. Rather, it’s the monopolized approach that the state took in licensing only one software provider.

Out of an impressive roster of applicants, which at one point included international iGaming giants such as PokerStars, it was 888 that won the Delaware state lottery’s sole contract to offer both online poker and online casino platforms on behalf of a grudging triumvirate made up by the state’s three brick-and-mortar casinos.

Player liquidity has been an imperative obstacle to Delaware iGaming since its launch in November. If the state is really serious about interstate liquidity agreements, then it follows that the aforementioned 888-backed All American Poker Network stands to gain by having an advantageous command of the state’s iGaming operation.

Looking to the rest of the unconquered U.S. iGaming space, while it has become apparent which states have a more advanced courtship with the concept of regulated online gambling, it’s difficult for now to predict how local regulations will set the stage for extraneous software suppliers.

Some states have indicated that they might be more xenophobic than others. California comes to mind. While not necessarily near any iGaming legislative closure, the Golden State has thus far lobbed up a couple of tribally backed bills that tend to be more or less jealously protective of the state’s large, prized player pool. Pennsylvania, on the other hand, has shown some interest in imitating its Northeastern neighbor, and via geographical proximity alone, it may be more easily influenced by nearby proven powers.

At the core of the U.S. iGaming struggle remains the unquestionable fact that localized state legislatures looking to permit gaming expansion have naturally geocentric interests in mind. Software suppliers looking to strike another deal, be they based in Europe or anywhere else in the world, are thus advised to take this uniquely American characteristic into account.