Europe's largest gaming trade show was held in London in late January. An busy schedule, interesting products and unseasonably mild weather was enjoyed by all attendees. 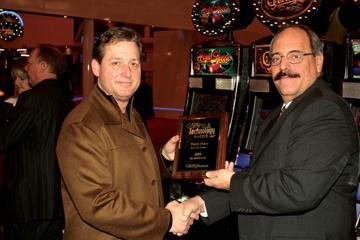 The International Casino Exposition met for the 15th time last month during one of the mildest winters ever experienced in London. Maybe it was the warm weather, but the agenda for the show was more active than in years past.

Highlighting the excitement was the announcement that Atronic had been fully acquired by GTECH, creating a dynamic gaming solutions company, poised for significant worldwide competition.

The growth of gaming around the world is highlighted by the increase in participation by new nations and territories. This year, a total of 122 national territories were represented on the show floor. First-time representations from Nicaragua, Rwanda and Tonga raised the total number of jurisdictions represented since 1995 to 181.

“We have always maintained that our exhibitions reflect the industries they serve,” Peter Rusbridge, CEO of Clarion Gaming, the organizer of ICE, said. “The two-day figures represent a snapshot of the business. The consolidation and uncertainty within coin-op markets is manifest in the ATEI attendance. ICE continues to build on its status as one of the strongest events for land-based casinos. Of course we are delighted with the development of ICEi, both in terms of the number and the caliber of attendees. However, attendance figures in isolation are relatively meaningless and as always the response of our stakeholders-visitors and exhibitors-will provide the litmus test.”

The European Casino Association has formed a two-year agreement with Clarion Gaming, producer of the International Casino Exhibition and other major trade shows and conferences, to “pursue possibilities” for jointly sponsored events over the next two years.

According to Ron Goudsmit, chairman of ECA and vice president of business development for Holland Casino, the two organizations have yet to determine what trade shows, conferences or other events make sense for the European market under the agreement, which was effective February 1.

“We want to work together to increase the casino industry’s presence,” Goudsmit said.

The alliance was announced at ICE last month, after the ECA held its annual meeting. One of the results of that meeting was the start of work on a white paper, or “working paper” as the organization calls it, highlighting what’s happening across the European online gaming industry and how the ECA thinks it should be approached. Goudsmit says the concerns across the industry center on responsible gaming controls on the gambling websites, and on eliminating sites that lack the transparency necessary to maintain the integrity and fairness found in the land-based members of the ECA.

Karen Cooke, Clarion Gaming’s head of exhibitions, praised the ECA for its important contribution to the development of the industry in Europe.

“Our approach has always been to work with the market to build and create events that
will make a real and telling contribution to businesses in the sector,” she said. “This will be a dynamic and exciting partnership, which, I am certain, will result in tangible benefits for the European industry.”

The winners of the Global Gaming Business 2008 Gaming & Technology Awards were
recognized in London in late January at the ICE show. The awards are the industry’s gold standard in this field, recognizing excellence in innovation and practical application in all gaming disciplines.

The Gaming & Technology Awards for 2009 will change timing this year. Nominations will be accepted starting in June, judging begins in September and the winners will be announced at a special awards ceremony at G2E 2008.