In 2019, ICE London will be the largest edition of the ICE Totally Gaming trade show in the history of the event. 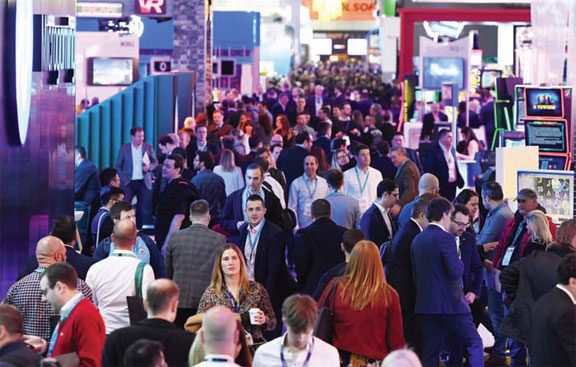 Clarion Gaming, producer of the ICE Totally Gaming group of gaming trade shows, has confirmed the 2019 edition of the ICE

London event, February 5-7, will be the largest on record, with net floor space growing from the 2018 figure of 43,500 square meters to 45,500 square meters, an increase of just under 5 percent. “Since 2012, the show has grown year-on-year and is now more than twice its size than that moment,” commented Kate Chambers, Clarion’s managing director.

“It’s important to stress this isn’t a one-off increase in demand for space, but part of a trend which stretches back to 2012, when the show floor comprised 22,500 square meters,” she says. ”Since then, ICE London has grown year-on-year and is now more than twice its 2012 size, a remarkable feat when you consider the level of merger and acquisition activity that’s taken place in the industry over that period.

“While the 2017-18 growth was due to the demand for space from payments providers, the 2019 growth has, in part, been driven by sports book and iGaming companies following the U.S. Supreme Court’s repeal of the Professional and Amateur Sports Protection Act (PASPA). We can’t influence change, but as professional event organizers, steeped in gaming, our job is to respond quickly to developments in the market—either technological or legislative—and to provide the best possible environment in which businesses can conduct business. As the most international gaming event on the calendar, exhibitors know that they can use ICE London as a method of launching into any gaming jurisdiction in the world.

“In 2018, ICE London attracted 33,536 visitors from 153 nations, and it’s clear that no other gaming event can deliver this volume or spread of international business opportunities.”

Chambers said a big factor in the growth of the ICE show was its relocation from London’s Earls Court exhibition hall to its current location at the ExCeL London venue.

“The relocation to ExCeL London gave us the opportunity to provide exhibitors with the stand options that simply weren’t possible at Earls Court,” she said. “Following that, we have been careful not to follow an aggressive growth strategy. Instead, we have worked hard to marry the growth of the show floor with a growth in visitor numbers, and I’m pleased to say that, in 2018, we were successful in growing the average number of visitors per stand by 17 percent and the average number per square meter by 12 percent.”

The Consumer Protection Zone, which was launched to great interest at ICE London 2018, has been given a new high-profile home on the show floor. The zone, which will be slightly bigger in 2019, has been relocated to the high-footfall area adjacent to the Bingo Pavilion and the Totally Gaming Academy in the South Hall at ExCeL London. The move reflects the huge importance that responsible gambling plays in the culture of all serious operators across all of the gaming verticals.

Ewa Bakun, director of industry insight and engagement at Clarion Gaming, said, “As fines for failings in the area of consumer protection become more punitive, excelling in responsible gambling, or safer gambling as defined by the U.K. Gambling Commission, not only impacts a brand’s reputation for integrity and fairness, but also its bottom line.

“Coupled with advertising restrictions and technology advancements that assist more informed approaches to consumer protection, responsible gambling will continue to dominate industry discussions and debates in 2019. The ICE London Consumer Protection Zone serves as a focal point for all interested parties, including regulators, research agencies, treatment organizations and those commercial organizations that have harnessed the power of new technology to progress the social responsibility message.

“The Consumer Protection Zone will once again host the most progressive responsible gambling organizations and feature an agenda of presentations and discussions around the hot topics of the day, including player tracking, self-exclusion, inventions, age protection and advertising.”

Clarion Gaming is inviting commercial organizations that put consumer protection at the core of their offering to exhibit at preferential rates and benefit from the exposure gained as key supporters of responsible gambling and consumer protection.

One of the unfortunate occurrences at ICE London over the years has been the increase of women dressed inappropriately on stands and walking through the exhibit halls. After recognizing the problem, Clarion Gaming responded by creating a “Code of Conduct” for exhibitors and participants.

The European Casino Association (ECA), which represents the interests of 900 casinos and over 70,000 employees operating in 28 member countries across Europe, has given its full support to Clarion’s Code of Conduct. The code, which has been developed in conjunction with a large number of industry stakeholders courtesy of Clarion’s Ampersand group, sets out the standards that exhibitors and individuals are required to uphold at all Clarion Gaming events, and covers gender representation and dress codes for stand staff.

ECA chairman Per Jaldung confirmed: “The European Casino Association fully supports Clarion Gaming’s initiative, which continues our long-lasting joint commitment to ensuring a respectful representation of all genders at gaming exhibitions. We encourage all exhibitors to follow this Code of Conduct and promote their products in innovative ways that celebrate the industry at its very best.”

Clarion Gaming’s Chambers believes the messages of support for the code received following its announcement in October reflect the progressive mindset of the international industry.

“We have been overwhelmed by the positive feedback received from all sections of the international industry that we represent,” she says. “The European Casino Association is a hugely influential body in the industry and at a political level. To have the full support of an association which represents businesses employing more than 70,000 people across Europe is a powerful endorsement of what we are trying to achieve.

“As well as influential trade bodies such as the ECA, I have also received messages from many individuals working in the industry who believe the Code of Conduct, and what it means for the responsible representation of gender at showcase international events such as ICE London, is the right course of action.”