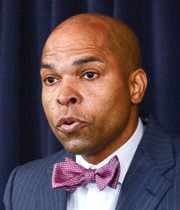 Bermuda’s Tourism Minister Shawn Crockwell (right) says a casino bill will go before the nation’s parliament before the end of the year. He described the draft legislation as “the most important component to ensure we have the best regime and administrative structure to effectively oversee domestic casinos.”

But it’s taken three years to get there, and a number of development plans have come and gone in the interim.

In May, the government entered into negotiations with the Desarrollos Hotelco Group to build a 238-room hotel, resort and casino in St. George’s. No hotel brand was announced, but Crockwell said it would be a “high-end luxury” brand.

Former St. George’s Mayor Henry Hayward told the Bermuda Sun that locals “will only believe it when they see it. So many developers have tried to do something with the Club Med site over the years, and we have seen a lot of failures. We’ve seen the closing of the golf course and the fallout from that for the St. George’s Club, and that came with the double whammy of losing the cruise ships.”

Former UBP leader Kim Swan said St. George “is starving for a development but it is incumbent on the government to get the process right first.”

Based on the regulatory framework for casinos in Singapore, the legislation will be “presented for approval before the end of 2014,” said Crockwell. “The legalizing of casino gaming in Bermuda is an important statement to be observed closely by our competitors and potential investors in the tourism industry. It is vital for the reputation of Bermuda that we get our legal structure soon, and this government is committed to that.”