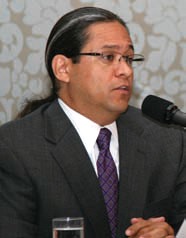 For the first time ever, an iPoker bill has passed the gauntlet of a key committee vote in the California Assembly.

Details of the bill remain to be hashed out in future committee votes and hearings.

The vote doesn’t mean the bill has passed, merely that it can be discussed on the floor of the chamber. But in previous sessions, unsuccessful votes meant that similar bills were left to languish without discussion.

The San Manuel Band of Mission Indians, a tribe that has been pushing for the legalization of iPoker for years, reacted with enthusiasm. “Now it puts a vehicle in play for legislators, and for stakeholders to have discussions in earnest about what ought to be in this bill to authorize intrastate internet poker in California,” said tribal spokesman Jacob Coin.

San Manuel and the Morongo Band of Mission Indians are in a coalition with card rooms and the Amaya Gaming Group, owner of PokerStars.

There is still plenty of disagreement about the bill, however. The Pechanga Band and its ally the Agua Caliente Band insist on a “bad-actor” clause that would specifically target PokerStars, which has been accused by the Justice Department of violating federal law by allowing Americans to play its real-money games on its offshore websites in 2011. Pechanga tribal Chairman Mark Macarro said last month his tribe’s position remains unchanged. “We believe it is necessary to protect consumers and the high suitability standards of the gaming industry from companies that do not and have not respected the law.”

Another deal-killer is the insistence by some tribes that racetracks may not be included in the mix of possible operators of internet poker.

Macarro declared, “California voters have always had the final say on gaming expansion, and they have already rejected expansion of gaming for horse racing.” In 2004, voters rejected a proposal that would have allowed racetracks to operate slot machines. Macarro also insists on the bad-actor clause.

He claims that allowing racetracks to participate would amount to expanding the scope of limited gaming in the Golden State. “The future of our people, the future of our tribes, depend on that policy, that law,” he said.

Supporters of PokerStars point out that Amaya Gaming Group purchased PokerStars last year, so it is not the same company the Justice Department sued. Morongo calls PokerStars “the pre-eminent online poker entity in the world.”

Morongo Chairman Robert Martin has joined several other tribal leaders in calling for compromise. His tribe fears that without the added clout of the racetracks the bill won’t be passed, since a two-thirds vote of both houses is required due to the financial nature of the bills.

Macarro counters that as long as the racetracks are excluded, the tribes should be able to work out a compromise. Governor Jerry Brown has previously stated that he won’t sign a bill without the inclusion of the tracks.