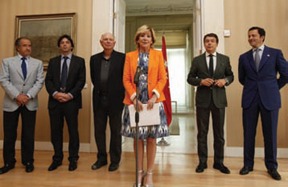 Spain’s casino industry, hit hard by a nasty recession and a 25 percent national unemployment rate, has seen revenue fall 40 percent since 2007. High taxes, a 2011 smoking ban and the legalization of online gaming have worsened the situation.

That is why industry officials see Las Vegas Sands’ multibillion-dollar EuroVegas scheme—which LVS says hinges on lower taxes and tobacco, among other things—as a potential savior. They believe that any regulatory changes to accommodate the massive Madrid development will spill over to them.

“It’s good news for the sector because these types of casinos use a high-investment, low-tax model to function,” said Heliodoro Giner, secretary-general of the Spanish Casino Association. “No one would invest this amount of money under the current tax regime.”

The tax on gambling differs in each of Spain’s 17 autonomous regions, with an average rate of 55 percent of gross revenues plus corporate tax. This leaves slim margins, according to operators, who say even casinos that lose money are obliged to pay up, a category that includes some 75 percent of the country’s casinos.

“Madrid will announce a much lower tax rate, and we’ll see what happens in neighboring regions,” Giner said. “It doesn’t make sense that a casino pays 10 percent in Madrid and 55 percent in Valencia. This is a great chance to boost the sector.”

However, any regional moves to ease taxes may be opposed by the central government, whose prime minister, Mariano Rajoy, is under intense E.U. pressure to raise revenues and meet budget targets in exchange for a massive euro zone bailout.

Lifting the smoking ban, which applies to all indoor public places, is another problem. It has cost casinos an estimated 15-18 percent of revenues, according to the SCA, but a relaxation is likely to be opposed by the Health Ministry.

However, as EuroVegas appears to move closer to becoming a reality, Madrid’s new leader, Ignacio Gonzalez, says the project is a priority for his administration and for Rajoy.

A source reported to be close to the financing said Las Vegas Sands is “negotiating with the banks, which already have made some offers. They have the financing. It is just a question of seeing which bank lends them the money most cheaply.”

LVS has said it will provide up to 35 percent of the funding itself for the first phase of the six-casino complex, which it says will cost €6.8 billion (US$8.9 billion).

Assuming it comes to fruition, the city’s two existing casinos are pushing for some help ahead of that day, mainly in the form of a reduction of the 45 percent tax rate they currently pay. This would give them a three- or four-year window to adjust, they say.

“We’d like the cut to take place immediately,” said Jose Maria Paredes, a spokesman for Casino Gran Madrid. “If the change comes once it opens, it would be too late.”