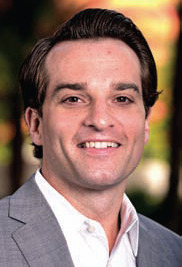 Nimble” and “strategic” are two words that come up often when Chris Gumiela describes traits key to his role as vice president of marketing for Monte Carlo Resort & Casino in Las Vegas.

Gumiela previously worked in marketing and business development positions at the corporate level at MGM Resorts International before taking over his current position in 2014.

“What I learned in that role is that you really had to be prepared and make sure you thought about the ins and outs of situations so you could be nimble when anything came up that would change the environment in any way, shape or form.”

At Monte Carlo, Gumiela says, those lessons serve him well, even in a property-level environment that often demands more immediate decisions.

“You have guests around you who are playing slots, buying food and beverages or requesting something, and you have to be very nimble, but you have much less strategic time,” he says, adding that you still must ensure that “you are very opportunistic in your thought process to say ‘what if this happens,’ ‘what if that happens,’ so you then have a contingency plan.”

Gumiela came to Las Vegas in 2006 straight from the University of Pennsylvania, where being strategic and nimble also likely helped him as a tight end and wide receiver for the college’s sprint football team. He started with then-MGM Mirage’s Management Associate Program and worked in multiple slot marketing positions at Mandalay Bay casino-resort. Later, Gumiela took on multiple roles with corporate oversight, including various marketing roles and later business development and strategic initiatives to develop the gaming floor of the future.

In his current role, he also focuses on leveraging new technology, particularly mobile technology, to enhance the guest experience on the hotel side.

On the gaming floor, the advent of skill-based gaming will create options that may appeal to guests not interested in the current offerings,

Gumiela says. “There’s a lot of opportunity,” he says, “and I think there’s going to be a little bit of trial and error.” Consumers’ rapid adoption of new technology also has created high expectations, he adds.

Customers, he says, want their travel amenities aligned with what they experience at home. “It’s that element of choice and personalization that has been the focus with technological advancements, whether it’s getting Netflix streaming to your television or just having Bluetooth so you can play your Spotify list,” says Gumiela.

The coming year promises to be a big one for Monte Carlo, Gumiela says, with MGM Resorts’ opening in April of its new 20,000-seat arena and The Park, a unique, vibrant outdoor space with common spaces, dining options and dynamic entertainment. In addition, the Monte Carlo is adding a 5,000-seat theater by the end of 2016, and has already revamped its Las Vegas Strip-facing façade to create an open-air plaza with dining and entertainment.

“We’re going to have a great opportunity at Monte Carlo,” he says, to capture new visitation from guests who choose to stay at Monte Carlo while they’re attending an arena show and increased foot traffic into the casino from the arena and The Park.

These days, readying for the opening keeps Gumiela plenty busy. “It’s a lot of preparation, a lot of planning, a lot of conversations about how we need to operate in the future,” he says. “We’re always looking at everything, just trying to make sure that we’re ready for the ever-changing needs and desires and wants from our guests.”