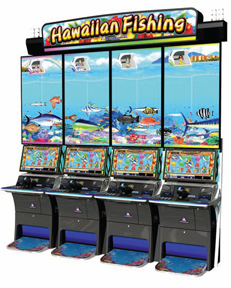 This is the latest sequel in Aruze’s community-style fishing game series that started with Paradise Fishing and was improved with Amazon Fishing.

Central to the game is a fishing bonus in which all players on a bank use physical rod controllers on the front of the game to compete for fish in a “habitat” formed by adjacent 55-inch top monitors on the Muso Limited cabinet.

Just as in Amazon Fishing, the controller provides natural resistance as a fish is caught, capturing the bonus indicated on the fish. There are two inaugural base games in the Hawaiian Fishing series, Bluefin Tuna and Dolphinfish. Both place the fishing habitat in the waters of the Hawaiian Islands.

Each base game is a five-reel, 30-line video slot. Two individual features can be triggered by the main game reels. The Sea Fishing bonus is triggered by bonus symbols on first and third reels and a “Bait” bonus symbol on the fifth reel. The more bait of that type that have been collected prior to triggering the bonus, the more fish can be caught. When two bonus symbols appear on reels 1 and 3 but no Bait bonus symbol appears on reel 5, the Ground Bait Bonus may be randomly triggered. The player’s character will throw bait from their boat into the water, and the player may catch one fish.

Players remain eligible for these bonuses for a certain amount of time while playing. A meter displaying this amount is always visible to the player during regular game play.