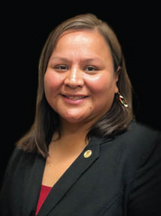 Jackie Gibson is extremely humble about her success and what has brought her to this point in her career. It was more than 15 years ago when she began her well-explored and overarching career with the Muscogee Creek Nation. From an early age, she had always been told that there was a job for her at the casino if she needed it, and so she started as a housekeeper.

Needing a job but knowing that this was not what she wanted to do for the rest of her life, she soon began to explore other options. In short, Gibson worked her way up from the bottom to become executive director of Muscogee, a feat she is particularly proud of.

Although inexperience was a challenge early on in Gibson’s career, she wanted to ascend in the company and expand her horizons. She opted to be a cashier because they made more money, and being a natural people person, she thought this would be a good fit.

In the end, it was not as she expected, but the experience was invaluable. Gibson eventually moved to the back of the house where she worked in the vault—an experience that she thoroughly enjoyed—and this included work with the drop and count people. The vault was also where she got her first experience in a managerial capacity.

With no real managerial experience, it took a tremendous leap of faith from one of her early mentors, Frank Haas, to believe in her and give her the necessary tools to grow within her position. Says Gibson, “Many times, people of upper management can put you in positions where you cannot succeed, but Frank, understanding that I had the drive, was the one to give me that opportunity.”

This experience eventually led to her becoming an assistant general manager at a nearby casino, a step that could never have happened without it. The role, though physically demanding with its night shifts, was rewarding and enjoyable. But Gibson realized that she still enjoyed the back-of-house work more.

Gibson soon moved to Remington Park when they introduced slot machines, as part of the revenue audit team. This is where another of her mentors, former controller of Remington Park Lisa Raymond, played an important role in helping shape Gibson’s career. Raymond understood the challenges of being a female in the gaming industry, and that it would be important for Gibson to not only understand this but to use it to fuel her drive to excel for herself and, in turn, for the company. Gibson carries this message with her, and it’s something she hopes to share with others coming up in the industry, be they male or female.

Gibson finds it extremely rewarding to work to stay ahead of a fast-paced industry, and she currently works to provide the type of experience and mentorship to others that she herself had been shown during her extremely successful career. Strictly speaking, and as taught to her by her mother, Martha Wind, Gibson preaches patience, and to not forget to walk before running. When success isn’t automatically handed out, reward comes from taking the initiative, working hard, and earning it.