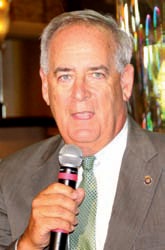 Online gambling in New Jersey is far from the billion-dollar business the state predicted—about one tenth of that—but still has had it successes after one full year of operation.

“We’ve had some victories and we’ve had some losses,” David Rebuck, director of the state Division of Gaming Enforcement, told the Associated Press. “From a regulatory standpoint, it’s working really well, without any catastrophes, meltdowns or scandals. On the negative side, it was projected to be a much stronger financial performer.”

Online gaming brought in about $111 million in its first year, and has settled in at about $10 million a month. Still, that’s very far away from the $1 billion New Jersey Governor Chris Christie predicted when it started and from the $500 million many analysts predicted.

That revenue has still propped up some Atlantic City casinos—online sites in the state have to go through Atlantic City casinos—but four casinos have still closed this year in the resort, though only two offered online gambling. A fifth casino—Trump Taj Mahal—is scheduled to close this month. Its online partner, Ultimate Gaming, has closed and left the state.

But the state has used the year to work on technical problems that plagued the early days of online gambling. For example, Rebuck says problems with geolocation software—which determines if players are legally within the state’s borders—have settled down and now false rejections occur less than 5 percent of the time.

Players, however, still face problems with credit card issuers and banks, many of which refuse to process online gambling transactions. Automated bank transfers remain the most common way for players to make deposits.

Rebuck told the AP that a goal for the industry’s second year is to increase player pools in online games like poker. He said he has had discussions in Nevada and the United Kingdom about sharing player pools, but no deal is imminent.

PokerStars’ entry into the market is also expected to give the state a boost, but Rebuck said approval isn’t likely until next year. Many had thought PokerStars, since being acquired by Amaya, would be approved more quickly.

The Pala Indian tribe of California launched a new site last month, and Rebuck said another company wants to join the New Jersey market as well, but he would not identify it.