The outbreak of the Coronavirus has had a major impact on the gaming industry. With this in mind, GGB is committed to keeping its readers informed as the world faces this growing pandemic. GGB will provide updated news and analysis on our weekly news site, GGBNews.com.
New Game Review 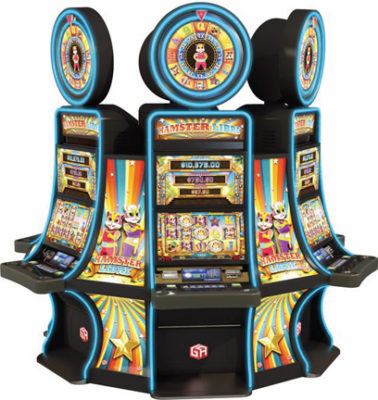 This is one of two games just released on Gaming Arts’ Phocus S104 cabinet, with the patent-pending Phocus Wheel topper. (The other game is Kai Yun Jin Bi.) The fun game theme centers around male and female hamster characters (“Ernesto” and “Emily”), and their clever use in the bonus wheel, which, of course, spins on hamster-treadmill power.

The base game is a five-reel, 243-ways-to-win video slot with a screen above the reels that displays one of the hamster characters in a wrestling ring. The main Hamster feature bonus activates that video screen and the top wheel, which the hamster spins to award a multiplier and a reel symbol that will become wild on the main game screen.

The hamster runs around the wheel and awards a multiplier to a specific symbol or drops up the three wilds onto the reels. The hamster in the wrestling ring performs one of three wrestling moves to place the wild symbols on the main game screen.

There also is a free-game feature. Three or more bonus symbols trigger 10 free games, during which the Hamster Feature occurs every other game on average. Three bonus symbols on a free spin award 10 more free games.