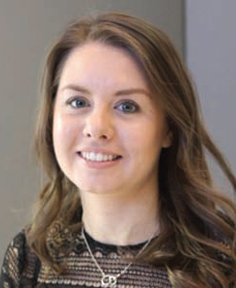 The Isle of Man lies in the Irish Sea between Great Britain and Ireland. Charlotte Cain calls the island her home, and has for most of her life. “It’s a beautiful place to live and especially to grow up in.”

Except for her years at the University of Bath, Cain has resided on the island. At Bath, she majored in French and international management.

“The course gave me the ability to learn the language in a business context,” she says. “Towards my final year of studies, I majored in human resources as a subject which solidified my interest and started my career pathway.”

As part of her degree program, Cain took an internship in a human resources department for a French global mining company.

“That really opened my eyes to how pivotal the function is to a successful organization,” she says.

For Cain, human resources is more than hiring candidate A for position B. “I’ve always been interested in how you could leverage off people’s skills in a business, particularly as people are notoriously unpredictable,” she says.

Cain could have sought a position anywhere. But she chose to remain on the Isle of Man with Continent 8 Technologies, where she serves as human resources manager. The Isle of Man has a strong presence in a number of industries, namely technology, online gaming and financial services.

“For me, a solid career will always be supported by my family, which just so happens to be based there. The Isle of Man, despite being small in size, has always had some fantastic opportunities in global organizations,” Cain says.

As Cain describes it, Continent 8 is an independent, international business on a “mission to discover and deliver innovative technologies to enhance connectivity, data center, cloud and cybersecurity solutions.”

Established over 20 years ago by entrepreneurs with what Cain says is a passion for boutique customer service, Continent 8 operates in more than 60 locations around the globe.

As HR manager, Cain is involved in all aspects of people management, helping staff reach their potential.

“I see human resources as an extension of all departments within the business, and my aim is to be there to advise and assist at all stages. My role is all-encompassing,” she says.

Continent 8 did not undergo a major seismic shift when it came to people management after Covid-19 hit.

“The structure of the company has always been very geographically dispersed, and as a highly technical organization, we were well set up to adapt and change to the ongoing situation,” says Cain, who spends down time walking, baking, cooking or involved with do-it-yourself projects at home.

For younger people entering the human resources field, Cain says be confident in what you know. “But be humble to learn and open to share. Technology is always developing, so you need to be eager to see what’s coming up next.”