MGM Mirage and Pansy Ho opened their first joint-venture property in Macau in late December. With competition fierce today in Macau, learn how the property plans to separate itself from its rivals. 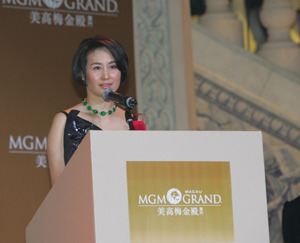 MGM Grand Paradise, the equally owned joint venture of Pansy Ho of Macau and MGM Mirage of Las Vegas, has commenced operations at its first resort casino. And although some industry- watchers are already talking about “opening fatigue”-referring to the number of grand openings Macau has seen this past year-apparently nobody informed the crowd of hundreds who waited several hours for the doors to open and to get into action at the MGM Grand Macau’s virgin tables and slots.

MGM Mirage Chairman and CEO Terri Lanni says the opening marks a major milestone for the company and Pansy Ho.

“We have long anticipated this moment,” Lanni said. “It marks the beginning of a new era, both for our company and for the Macau gaming market. We’ve been eager to demonstrate the combined capabilities of our partnership, and this striking resort is testament to what we can achieve together. We are confident our efforts brought satisfaction to our many guests who celebrated with us tonight and will continue to do so for the many who visit Macau in the future. We look forward to showcasing to the world what we have created.”

He isn’t worried about fatigue or what some might perceive as too many providers in the market.

On the Monday before the opening, Lanni told reporters, “I’ve been in this business for 31 years and there isn’t a year has gone by that people aren’t saying: Aren’t you building one room too many and/or one casino too many in Las Vegas?”

“I suspect that the marketplace will sufficiently grow to meet the demands of the ever-growing casino population,” Lanni concluded.

Lanni pointed to the strong economic growth in the nearby mainland provinces, from which 85 percent of Macau’s players come. “They do have that 11 percent-12 percent GDP growth in those provinces and I don’t see that abating anytime soon.”

Pansy Ho seems to agree in principle, especially where the high-roller market is concerned. With 16 private gaming rooms, MGM is clearly aiming to be one of the destinations for this lucrative group of players. Ho believes the number of casinos offering high-end action presents “a really formidable proposition to all VIP customers that this should be the center of the high-rolling gaming experience.”

“Macau is the most important gaming market in the world,” Bob Moon, president and CEO of MGM Mirage International, told Agence France-Presse. “What you have is a mass market and a very aggressive government that is trying to make this a true international destination.”

Gross gaming revenue from all Macau casinos combined was 58.3 billion patacas, about US$7.4 billion, for the first three quarters of 2007. That is already more than the total of 56.6 billion patacas for all of 2006.

The $1.25 billion MGM Grand Macau has 600 rooms, suites and villas, with the main tower reaching 35 stories. Non-gaming amenities include a number of restaurants catering to a variety of international tastes, a top-quality spa, convention space, and a large central plaza that incorporates classic Portuguese architecture and which is capped with a glass ceiling 25 meters above the floor. The property currently employs around 6,000. There are reportedly plans to expand in the next year or two, to the tune of as much as 120,000 square feet for gaming and 80,000 for non-gaming facilities.

With the new property up and running, Macau now has 8,300 luxury hotel rooms, 4,400 tables and 12,400 slots. The property was designed by Wong Tung International Ltd., which also designed Crown Macau, as well as many other hotels and resorts in Asia.

The MGM Grand Macau is looking to compete with the Wynn Macau and the Crown Macau for the high-end market, as opposed to the mass market approach being followed by Venetian Macao. Interestingly, the Crown is a joint venture between James Packer’s Crown Limited and Melco International Development Ltd., which is run by Lawrence Ho, who is the brother of
Pansy Ho.

Two days following the opening of the MGM, Wynn Resorts announced it would open its Wynn Macau casino expansion on December 24. Originally, the additional 85 tables and 551 slots were not scheduled to begin operating until a month later. The new games bring the Wynn Macau total to approximately 390 tables and 1,190 slot machines.

In January, Wynn is opening an expanded retail offering with 11 new high-end shops. Construction has already begun on the Wynn Diamond Suites at Wynn Macau, which consists of a resort hotel with over 400 luxury suites and villas, plus restaurants, retail space and, of course, more VIP gaming space. The project is expected to open in just over two years.
For Melco’s Crown Macau, the new MGM property represents one more challenge. Opened in May, the smaller resort casino has 220 tables, 500 slots and 216 hotel rooms, including 24 VIP suites. In a recent Forbes Asia interview, Lawrence Ho spoke of one big early mistake.

“We went away from my original vision-which was a high-roller, six-star, VIP property-and tried to squeeze in too many slot machines,” said Ho.

To correct the situation, Crown Macau now has a three-year deal with AMA International, solely to increase its share of VIP play.

None of these plans appears to worry Pansy Ho.

“There’s no end of creative ideas at MGM Grand Macau,” she said, addressing the local media.

And, in what would pass for a challenge in any language, she said, “I would urge our neighbors to watch out.”