Spain's ambitious super-project waits for the world to catch up 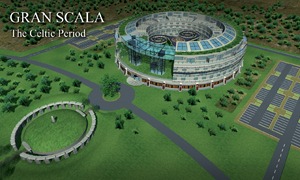 During the week of the annual G2E show in Las Vegas in 2007, an incredibly ambitious project for Spain’s arid northeastern region is unveiled. With a staggering €17 billion/ billion price tag and featuring 32 history-themed hotel-casinos, dozens of cultural attractions and theme parks, numerous facilities for shopping, sports, recreation and various levels of holiday accommodations, all packaged in a comprehensive and Utopianesque urban plan, the working name of the project-Gran Scala-is an understatement.

No leisure attraction of this magnitude has been tried from scratch anywhere before, let alone Europe. But it is 2007 and the casino resort industry is booming worldwide. Macau is on the verge of overtaking Nevada as the largest-grossing casino jurisdiction and the Cotai Strip is still to come. Multibillion-dollar mixed-leisure developments are being built in Singapore and touted in Vietnam. In Las Vegas, CityCenter is rising. There is no shortage of investment for bold, expensive projects.

Still, willing investors aside, Gran Scala is asking a lot in the way of suspension of disbelief. The regional government will need to give developers the nod in the face of politically sensitive environmental issues. Land owners will need to be convinced to sell. And again, this being Europe, some wonder if there is a market here for a Las Vegas/Disney World/City of Tomorrow.

Two years and a couple of months later, the world of property development has changed significantly. But despite delays, International Leisure Development PLC, the engine of Gran Scala, is still forging ahead.

Three major theme parks, including a world-class movie theme park bearing the name of a major Hollywood studio, are planned to open in Phase 1. The exact number of casinos that will be ready in this phase is not available, but the campus will feature a minimum of 8,000 gaming machines. ILD has preliminary agreements with a number of operators and is in discussion with others, but signed contracts are awaiting approval by the regional government of the updated plans, which are being finalized.

The updated plans are scheduled to be submitted to the government in May, and as they differ from the original concept basically in layout only, it is expected they could be approved before the summer recess.

When first introduced, the schedule called for a 2012 opening of Gran Scala. However, to satisfy the original timeline, the government of the autonomous region of Aragon would have had to approve all plans and permits, and ILD complete all land purchases needed for construction, sometime in 2008. As it happened, the law that allows development of such a grandiose project only came into force in July 2009, and it had been deemed too risky to proceed with land purchases and infrastructure improvements without such a law in place.

The legislation in question is known officially as the Law of Leisure Centers of High Capacity. Passed by the Aragon regional government, the law applies to any tourism, cultural or sports project that develops an area of at least 1,000 hectares, creates 3,000 jobs minimum and builds 8,000 or more hotel rooms. Because the law was the direct result of the proposed project, it is known colloquially as the Gran Scala Act.

By mid-March, ILD had purchased 35 percent of the land needed for the project to move forward. Arrangements are in place to obtain another 40 percent, which would bring the total area in hand to the mandated 75 percent of the total 3,000 hectares. When the government has given final approval to the project, the outstanding parcels will be purchased. If all goes smoothly from here on out, Gran Scala is expected to open in 2014.

The delay has given developers time to fine-tune aspects of their initial concept. For example, instead of the circular layout of the hotel-casinos, the decision has been taken to go with a more conventional strip format, which is better suited to the site’s topography.

Another potential benefit of postponement has been found in the matter of transportation infrastructure improvements. Gran Scala will be built on land near the town of Ontiñena, which is 425 kilometers from Madrid and 225 kilometers from Barcelona. The main highway between the two major cities passes around five kilometers from the border of Gran Scala land and only requires construction of on- and off-ramps and a five-kilometer stretch of road for easy access.

The existing Madrid-Barcelona high-speed rail line, which runs about four kilometers from the site, will see construction of a local station. Both the road and rail projects are said to have been worked out between the regional and national authorities. Three airports serve the region: Huesca, about 50 kilometers distant, is operational; a new airport at Leida, just 15 minutes from the future town, is in its final stage of construction; and the existing international airport at Zaragoza is about 100 kilometers away.

Gran Scala and the New Normal
The worldwide economic crisis may have delivered its own unanticipated boost to Gran Scala’s prospects, in the arena of potential investors. Construction of the massive Dubailand leisure park has been put on hold due to the financial problems in Dubai. In a recent interview with Spanish news source El Heraldo, Frederic Bouvard, vice president of the leisure parks division of ILD, noted that some participants in Dubailand were now looking at Gran Scala as a possible opportunity. Some of these potential investors required a Sharia compliance process, which was recently completed, and negotiations are expected to be finalized in the spring.

For the government of Spain, where unemployment hit 18.3 percent at the end of 2009 and is expected to go to 19 percent this year, the prospect of new jobs has to be alluring. In February, 50 percent of all jobs lost were in the services sector, followed by 10 percent in construction. The government is so desperate that it recently presented a plan to create 350,000 construction jobs by cutting the value-added tax on home improvement work.

In contrast, Gran Scala would provide “real” construction jobs in the building phase, jobs that would also satisfy the government’s desire to move away from the so-called speculative construction of the previous decade, which helped lead up to the current slump. Together with the mandated creation of at least 3,000 permanent jobs, which would be mainly in the service industries, the matchup of Gran Scala to these specific and ailing job sectors is a good fit.

The big question that remains to be answered involves the viability of mixing a casino gaming product with the more family-oriented theme park and cultural activity offering. The model has worked at Genting Highlands in Malaysia and Resorts World Sentosa in Singapore, but nothing similar exists in Europe. According to Bouvard, ILD has already performed the necessary market research and determined that the model will work.

The study, carried out by a firm described by Bouvard as one of the world’s top two in market research, was conducted all over Europe and involved 16 focus groups in six markets and 7,200 surveys completed in seven markets. The economic crisis was already under way when the studies were performed, and still the results were positive enough to encourage ILD to continue with the project. The volume of research produced results that provide a confidence level of 95.5 percent, which is of a similar accuracy to those used in political polls.

The next step for ILD is to produce its revamped plan for the layout of Gran Scala, submit the plan to the Aragon government for approval and make the details available to potential investors and partners, and the general public. The ILD website at www.ild-plc.com still hosts details of the original plan, including the names of partners and companies that had previously agreed to be involved. It will be interesting to see how many of those names are still present when the new plan emerges.