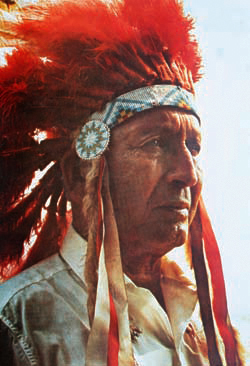 In the decades of struggling to achieve federal recognition and economic and social progress, the Poarch Band of Creek Indians often looked to other indigenous leaders for advice and counsel.

Eddie Tullis, Poarch Creek chairman from 1978 to 2005, lists the late Roger Jourdain of the Red Lake Band of Chippewa and Joe DeLaCruz, longtime president of the Quinault Nation, among those leaving behind a legacy of sovereignty and self-governance.

But Chief Phillip Martin of the Mississippi Band of Choctaw Indians and James Billie, chairman of the Seminole Tribe of Florida, were particularly instrumental in assisting their Alabama neighbors on economic development and gambling issues.

“The leadership of our tribe has always worked very closely with neighboring tribes,” says Poarch Creek Councilman Robert McGhee, whose grandfather Calvin McGhee was instrumental in the drive for federal recognition. “They shared information and knowledge.”

Martin, who led the Choctaws for 48 years, was a pioneer in economic development on Indian lands long before gambling became an option. Martin died in 2010.

Billie, re-elected as chairman in 2011 following his impeachment a decade earlier for alleged financial irregularities and sexual misconduct, in the 1980s led the Seminoles through a series of landmark legal challenges to its high-stakes bingo operations.

“Phillip Martin was more involved in building a tribal economy than any other tribal leader,” Tullis says. “Phillip became a real friend and mentor to me.

“As soon as we were recognized Phillip started making some of his staff available to us on an as-needed basis.”

“James (Billie) was my mentor as far as gaming was concerned,” Tullis says. “He’s quite a man.”

As Martin utilized manufacturing and tourism to create jobs and pull the Choctaws out of generations of poverty—securing government contracts and offering tax incentives to corporate partners—so did Poarch Creek.

With passage of the Indian Gaming Regulatory Act of 1988, Martin turned Choctaw to gambling, tourism and hospitality.

A similar evolution is taking place in Alabama. The Best Western today is the Muskogee Inn. And the tribe has expanded its portfolio with investments in Alabama and Florida hotels.

“We copied them on their economic development,” says James Martin, president and CEO of the Poarch Creek Indians Enterprise Development Authority. “Why reinvent the wheel?

“We have been concentrating on the hospitality industry but we will go into other areas in the future,” he says, including commercial and tribal gambling ventures.

Martin formed alliances with local, state and federal elected officials and Washington bureaucrats and policymakers. So did Poarch Creek.

“He was very involved on the national level, particularly with the Indian Health Services in providing clinic and elderly care,” Poarch Creek attorney Terri Poust says of Tullis. “He also was very astute when it came to securing HUD housing and federal funding.”

“It didn’t have a profound impact on our relationship,” Tullis says. “We realized Chief Martin was doing something that was a political necessity for his tribe’s survival.”

Meanwhile, Poarch Creek turned to the Seminole—which also struggled with state officials in securing a Class III compact—in learning how to grow a bingo-style gambling enterprise.

Poarch Creek hired a Texas bingo operator and went into business the very day in 1985 its initial 230-acre reservation was placed in trust.

Billie had sage words of advice on how to compete with other forms of Alabama gambling, including illegal slot machines, church bingo and country club poker games.

“Billie kept telling me, ‘The secret is to advertise those big pots and people will come,’” Tullis says.

“We were blown away by how many people would travel to Atmore to play bingo,” says Tullis. “There was no other gambling in the state at that scale.”

Human remains from Hickory Ground, sacred to the Muscogee (Creek) Nation forced in the 1800s to relocate to Oklahoma, were unearthed during construction of the Wetumpka hotel. Despite being reinterred and a memorial established, the incident ignited an ongoing feud.

Tribal leaders are concerned about Poarch Creek citizens’ dependence on per capita payments, which AL.com reported to be $18,000 in 2013.

And Tullis is discouraged at attorney and lobbying fees needed to ward off attacks on gambling and sovereignty.

“I was chairman for 27 years and I never had an in-house attorney. I never engaged a lobbyist,” Tullis says. “Now we’ve got five or six in-house attorneys and 20-something attorneys on retainer. We spend way, way too much money.”

But Poust speaks with pride at the recent openings of a tribal clinic and elder care facility, both financed largely with casino money.

“Both those buildings are just gorgeous,” she says.