Southeast Asia and the growth of many different gaming industries 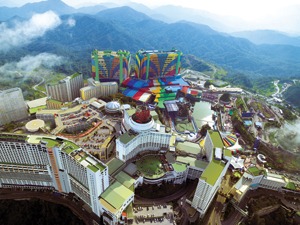 Southeast Asia is truly one of the most remarkable places in the world to just simply hang out. The dynamic cultures, scenery, friendly people, beaches and reasonable infrastructure make it a part of the world that every person should visit. It’s also an area of Asia that every executive should look at for doing business.

The travel and leisure sector in Southeast Asia is fast-growing, competitive, and in some areas undersupplied. The casino gaming industry is slowly becoming a part of what Southeast Asia defines as a tourism experience. Therefore, it’s valuable to sometimes step back and take a look at casino industry opportunities in the region from a macro-view, and we will do that here.

What’s important to understand about the region is that it’s a relatively tight geographic area that contains many different countries with many different languages. In essence, Southeast Asia is essentially fragmented from a marketing perspective. That said, most of the countries have tightly integrated trading relationships with each other and intra-Southeast Asia conflict (of the very serious kind) is rare.

As casino executives analyze the Southeast Asian market, they must quickly become familiar with what is known as ASEAN, the Association of Southeast Asian Nations. Think of ASEAN as a hybrid combination of NAFTA and the European Union. It’s essentially an organization that creates a common platform of trade and economic activity in the Southeast Asian region. The impact of ASEAN on many issues relating to tourism and travel is significant.

Planning casino development in Southeast Asia, or even just analyzing the current market, requires a good grasp of the macroeconomic conditions of the region. Southeast Asia is currently experiencing rapid economic growth while at the same time showing signs of increasing inflation. In fact, Vietnam has been grappling with inflation issues for over the last year. This is all due to the blazing speed of economic growth in the Southeast Asian region. For example, Indonesia posted GDP growth rates of nearly 7 percent in 2010.

Southeast Asian currency values have also been increasing in value, against the U.S. dollar in particular. This has mainly been due to the massive amount of “hot money” coming from the U.S. and Europe to be invested in the Southeast Asian marketplace. This kind of macroeconomic environment does pose long-term risks, but for now, it has resulted in tremendous GDP growth for Southeast Asian countries over the past few years.

All of this economic growth has resulted in something that is highly valued by the casino gaming industry: disposable income. As Southeast Asia becomes awash in monetary liquidity, so do the consumers. As consumers in Southeast Asia become wealthier and well-informed on tourism options, their demand for casino gaming entertainment will only increase.

There is a very wide variance in the regulatory and legal structure of countries in Southeast Asia. On one end of the spectrum, you have countries like Singapore that take a very transparent, ethical and strict approach to the regulatory environment of business. On the other end, you have countries like Burma that don’t have any identifiable approach to regulation whatsoever. Therefore, it’s critical for casino executives to take a measured approach in many markets in Southeast Asia.

One of the big areas to watch carefully, particularly as it relates to new casino development, is the issue of land rights. Many countries in Southeast Asia have even more strict laws regarding land ownership than countries like China. The reason for this is that historically, Southeast Asia has had many renditions of colonization, and when these countries became indigenously controlled once again, laws were passed to prevent foreign ownership of land, under all circumstances.

There are certainly some very specific exceptions that some governments in Southeast Asia make about land ownership by foreigners, but they are very few and far between. What this ultimately leads to is many casino gaming executives being forced to deal with a local land owner that may know next to nothing about the casino gaming industry. Of course, this becomes a great area of required caution for any non-local casino gaming company.

In analyzing specific countries for their current performance, or market potential, it’s important to remember that some countries in Southeast Asia do not have fully transparent reporting of casino statistics. In addition, what may be a very small opportunity today may turn into a huge opportunity tomorrow, due to shifting political power in the region.

There is virtually no casino gaming activity in Brunei, and what little activity does exist is outright illegal. There are no prospects in Brunei for the casino gaming industry for the foreseeable future.

Burma (officially the Republic of the Union of Myanmar) has been in the news a lot recently, due to the possible shift of power from being a military regime to a democratic one. This change would be slow and cumbersome. However, it is worth keeping note of Burma as a potential tourism destination in Southeast Asia that may at some point look to various ways to generate revenue for the country.

Keeping an eye on Burma over a five-year time horizon would be a rational thing to do. There are some indications that illegal casino activity does take place in the country, but that activity is risky; it is mainly cross-border activity.

One of the more “emerging market” casino development opportunities is that of Cambodia. There are over 20 casinos in Cambodia that are officially known, and countless others that operate “under the radar.” One of the significant issues with this market is that the regulatory and legal environment for casino gaming development is somewhat murky.

However, Cambodia presents a long-term market opportunity because the concepts of casinos are essentially legal and Cambodia will, over the long run, grow. Most of the casino patrons in Cambodia are Thai. Nothing in 2011 will be particularly spectacular about this market, but it will surely be a long-term opportunity to continue to watch.

This is Southeast Asia’s newest country, gaining independence from Indonesia in 2002. Unfortunately, it’s a poor country that is still at the very early stages of economic development. That said, one never knows when a country like Timor may look to the casino gaming industry to assist in the development of a tourism sector.

In the context of Southeast Asia, Indonesia is, in many ways, the 800-pound gorilla. It’s a country over 300 million in population and boasts a huge number of islands. Yet, at the same time, it’s a relatively small market opportunity for the casino industry due to the fact that the government of Indonesia has so far frowned on the idea of legalized casino gaming. That said, illegal casinos do operate in various parts of Indonesia.

In many ways, Cambodia and Laos are cousins in the casino industry. Laos, like Cambodia, does have casinos that tend to operate with a certain kind of impunity. These casinos tend to serve the border of Thailand and Vietnam and are lightly regulated. Furthermore, the operations of these casinos in Laos (which number more than 30) pose significant issues relating to transparency. While this market is interesting, it is certainly one that should be researched cautiously.

For many decades, Genting Highlands (located in the Kuala Lumpur metro area) was known as one of the only fully government-approved shows in Southeast Asia. The Genting Highlands operation, even with the existence of the Singapore casinos, is performing reasonably well. Even though the Malaysian government has allowed this casino to operate for decades, it never has seriously considered the idea of legalization of other casino locations in the country. However, with the development of Singapore’s casinos, one may look at the possibility of Malaysia revisiting the topic.

A new political era has been established in the Philippines with a new president who seeks to create a government that is transparent, ethical and honest. For many years, the largest casino gaming companies have been asking the Philippines exactly for that. This country is a unique market because casino gaming is already legalized, yet, the concession to operate casinos is only held by a de facto government company known as PAGCOR. This is definitely a market that should be watched, especially as it relates to the large Manila Bay entertainment district/casino master plan.

The story of Singapore as it relates to casino gaming has already been written, and it is now history. Both Las Vegas Sands and Genting operate in Singapore, and invested over US$5 billion each in their integrated casino resorts. The performances of these casinos have been enormous, with gross gaming revenue for the market exceeding a US$4 billion run-rate. Unfortunately, the casino gaming industry in Singapore won’t expand for at least the next five years, due to the exclusive concession these companies have. It’s a market to watch, but not to take action on for quite some time. However, slot manufacturing companies should put Singapore high on their list as they rotate product to keep the resorts there fresh.

One of the greatest tourism destinations in Southeast Asia is Thailand. Yet, at the same time, it probably won’t be the destination of any major casino investment anytime soon. Thailand is a strict Buddhist country, and the influence of this constituency is significant enough to affect government policy decisions. While the word “casino” has been used a few times over the last five years in the Thai government, there doesn’t seem to be any substantive move forward in this direction. Furthermore, the political instability of Thailand makes it a great place to look, but not to touch.

As one of the most populous countries in Southeast Asia, Vietnam provides a unique market opportunity for both casino development and tourism offerings. The government of Vietnam has a de facto license-by-license review approach to casino gaming legalization. There are some big names starting to be involved in the Vietnam market, including some participation by MGM. What has yet to be seen is whether Vietnam can support mega-projects, or whether development opportunities are limited to more muted operations.

Southeast Asia boasts significant opportunities for the casino gaming industry in the medium and long term. While the economic situation in Southeast Asia continues to be positive, robust and strong, one should be cautious about possible future economic downturns.

In general, the most promising markets in the Southeast Asia region are Singapore (finite casino licenses), Philippines, Vietnam, Cambodia and Malaysia, while Thailand is a country to keep the eye on. The other countries in the region are possible great tourism development opportunities, but not necessarily great casino industry opportunities.

All in all, Southeast Asia provides a dynamic market opportunity going into 2011 for the casino gaming industry. It’s important for those that currently operate there, or those that are wishing to, to properly conduct feasibility studies before making any major investment of capital or business development dollars.