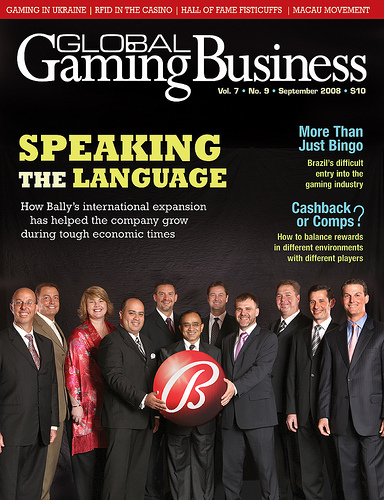 Times may be rough in the industry, but slot-maker Bally Technologies has a sure-fire hedge against the economic doldrums: Sell more machines. In more places.

For Las Vegas-based Bally, those places span the globe. In the past four years, sales outside of the U.S. have gone from 6 percent of overall revenues to 15 percent. “We’re optimistic that we’re going to grow that to over 20 percent in the next 12-24 months,” predicts Bally CEO Richard Haddrill, “as we expand in new jurisdictions and introduce our full product line globally. We’re very excited about the international marketplace.”

Bally has been on an international offensive for the past three years, concentrating on getting a sales infrastructure up and running in the Asia-Pacific region, South America, Mexico and, most recently, South Africa and Eastern Europe. The company opened an office in Johannesburg, and is following that up with an office in Ljubljana, Slovenia, that will serve both Central and Eastern European markets. (Bally is firmly established in Western European markets.)

John Connelly, who as vice president-international is overseeing the expansion efforts, notes that in many of the newer jurisdictions, customers are seeing Bally product for the first time in a decade or more. As a result, he says, Bally is not as affected by the international economic slump as other companies. “Although you see some attrition globally with the markets, the impact on Bally is minimal,” Connelly says, “because we’re opening up new markets. We’re seeing a lot of momentum in these markets where before we had relatively little.

“Though you’ve heard a lot of doom and gloom in a lot of discussions concerning market conditions over the past six to eight months, I feel considerably different when I view the outlook for Bally’s international business growth.”

One may wonder why Bally, the oldest slot manufacturer in the world, waited until now to make an international expansion push. According to Haddrill, among the reasons is the overall investment required for such an expansion.

Most important in the timing of the expansion, though, is the state of the product itself. The Bally product being seen in the new markets is nothing like the product those casino operators may have seen 10 years ago, or even five years ago. The technological rebirth of the Bally product that has occurred since the 2003 acquisition of Sierra Design Group has completely transformed the company’s product line-and as a result, its sales.

Combined with Bally’s continued dominance on the system side of the business, the Alpha Elite product line-one advanced computer platform for reels and video; wide-screen and wide-reel formats; ergonomic cabinets-is what has really driven the international expansion. “Without Alpha, there is no way our games business could have competed internationally,” comments Gavin Isaacs, Bally chief operating officer. “On top of solid, dependable technology, we have had room to innovate, and that’s what Alpha gave us.”

“Also very important on the game side,” adds Haddrill, “Bally’s history was predominantly as a stepper company, and there were not many market opportunities for steppers internationally. But with the company expanding so successfully into video, and with the new style of bonusing multi-line steppers coming of age, we’re finding that not only is our stepper product being well-received internationally, but our video product as well. Our products are playing well internationally, where historically they have not.”

With the right games in place, Bally has embarked on a coordinated effort to expand-deliberately and carefully-into new markets. The international sales offices have opened with minimal cost, and as a result, most of the new sales revenue has gone straight to the bottom line.

The company’s sales staff has been ready to serve each local market, thanks to coordinated efforts at the corporate level such as July’s annual sales conference, in which sales executives from all corners of the globe converged on Treasure Island in Las Vegas to review the previous year, talk about objectives for the coming year and, as Isaacs says, get into the “nuts and bolts” with specific training for each international group.

“All of our international people get sales training, and cross training between systems and games,” Isaacs explains. “Our field service people have their own off-site training meetings as well. This is really an opportunity not only for a get-together and bonding as a team, but the meeting provides training to launch the year.”

“People are really excited to share ideas on how to serve their customers better in the different markets, and to share excitement about the future direction of Bally,” adds Haddrill. “We rolled out our five-year strategic plan to the leadership team, and we shifted from that broad message for the total company to the education sessions, which are more detailed about products and in-market strategies.”

Connelly says these efforts will allow Bally to capitalize on opportunities cropping up around the world, beginning with Macau and the rest of the Asia-Pacific market. Macau, however, is only one of a wealth of opportunities for the company.

“From an overall international strategy standpoint, the Asia-Pacific market is obviously very important,” Connelly says. “That said, we’re seeing significant growth trends right now in markets where we haven’t been present, as well as those where we currently reside. For example, look at Chile, where over 15 new licenses have been issued.

“We’re seeing tremendous growth in the southern region of South America. The same for South Africa. Bally left there seven years ago, and we just re-entered, having tremendous success, in both our percentage of the floor and the performance of our products. The same for Eastern Europe, where we’re just re-entering several markets. And let’s not forget Mexico. Bally is one of the leaders in that market, and we continue to see very large growth in the Mexican market, both from the machine and the system perspective.”

Connelly notes that for most of these markets, the strength of Bally’s current game library has been the key to success. “Several of the same products you find are doing so well in the United States are doing extremely well in those countries,” he says.

Those “same” products are, of course, tweaked for the local markets. The strength of the Alpha platform in new markets is maximized, says Connelly, by customizing the games with an eye toward the culture, play habits and, most importantly, the language of players in each new market area.

The process involves careful coordination between Bally’s central research and development teams and the representatives in the field at each location. “We have a common R&D strategy and plan across the company,” says Srini Raghavan, vice president and managing director for Bally in India, “but the regional and global R&D teams wok together as one, and augment each other’s efforts to fulfill our objectives.”

The R&D team in India is over 500 strong, and works on developing both game software and casino management systems. It is one of 12 such R&D studios around the world, and the only one in Asia. (Bally is doubling the size of its India operation by the end of the year.)

Ramesh Srinivasan, Bally’s executive VP of systems, says the goal of Bally’s R&D is to create basic product framework that can be adapted to work in any worldwide market. “For our international lines of products, we are making sure the games and systems, on the same code base, can work in different regions without having to change the basic product,” Srinivasan says. “It provides for portions that can be easily translated into different languages. You don’t have to change the basic software to make the products easily adaptable to different areas.”

The success of the final product in each area, though, still depends to an extent on the Bally executives who are in the field offices, and thus familiar with the local cultures and customs.

This is particularly important in markets like Macau, where the slot market is still growing, and cultural familiarity can be the key element in whether a gambler-in China, there are many trying slots for the first time-even sits down at a slot machine. According to Catherine Burns, Bally’s vice president and managing director for the Asia-Pacific market, that means communication between the field and the R&D staff.

“It means a lot of talking to the experts who make the games, to relay cultural differences that are important,” Burns says. “The Chinese player is no different than any player I’ve ever seen. They enjoy playing the game, they like to win, they want some fun, they want a good experience. The cultural differences, you only learn by being there-whether it’s certain colors or themes that are considered lucky, or any other important difference.”

Burns notes, though, that success in Asia still begins with a good math program for the game itself. “If you’ve got great colors and themes but a poor mathematical model, you’ve got a poor game. To me, success in the market is a mixture of both factors. We need to cherry-pick the best games worldwide, use our local knowledge to understand our player, and relay that back to our game development people. Then, we will have constant improvement, constant innovation.”

As Bally continues to expand its product base into new jurisdictions, the company’s executives are methodically meeting each new challenge.

“One of the greatest challenges when you take a company global is developing the appropriate infrastructure to meet your client base,” says Connelly. “And, as you can imagine, each country or territory has certain regulations, certain laws, which requires you to have a knowledgeable staff so you can maximize your revenue and speed to market.”

He adds that some of the company’s most successful products are now beginning to take hold in the company’s newest markets. “We have some incredible products that have been giving us great results in Western Europe,” he says. “We’re starting to take those products into Eastern Europe and South Africa, and making sure we can maintain the appropriate levels of support for the demand we’re receiving. It is a healthy growth, but a controlled growth.”

The ability to execute that controlled growth internationally has been welcomed by Wall Street, according to Haddrill. “Clearly, it’s viewed as one of the strengths of Bally,” he says. “With the economic downturn present in the U.S. and other international markets, investors have looked at Bally and seen a company with the opportunity to continue to grow from what was a relatively small base of international business to a much larger base.”

He adds that the controlled nature of the growth means it has remained a profitable expansion.

“When a lot of companies expand internationally, they will overbuild the infrastructure, or they will focus just on revenue growth,” Haddrill says. “We’ve been successful thus far in rapid growth, but also profitable growth.”

“As we’ve grown globally,” adds Connelly, “we’ve been very successful in creating offices around the world with very cost-efficient structures. That has allowed us to generate immediate profits out of these offices, whereas other companies that have been in the market a decade or more are dealing with the challenges of having built up a large infrastructure, and dealing with that from a profit standpoint as economies and markets fluctuate.”

Haddrill says the main goal for Bally in this effort is to learn to “think globally,” while maintaining the Bally corporate culture and business practices that have led to the slot-maker’s recent surge in sales.

“As you go into international jurisdictions and grow as fast as we have, you need to be ever-vigilant to keep a common culture and great business practices, as well as enforcing good, strong business ethics,” says Haddrill. “Creating a global culture is not simple, because you’re adding a lot of people from different countries and different cultures.

“Building a company that has one culture, but thinks and acts globally, is a challenge. I’ve been very proud with the success we’ve had in doing that.”