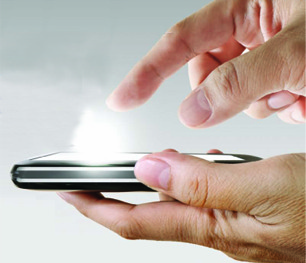 In 1965, the 36-year-old director of research and development at Fairchild Semiconductor was asked to write an article for Electronics magazine, in which he was to project the future of semiconductors. So Gordon Moore sat down and wrote a paper titled Cramming More Components Onto Integrated Circuits.

In very plain language, Moore predicted that “integrated circuits will lead to such wonders as home computers—or at least terminals connected to a central computer—automatic controls for automobiles, and portable communications equipment.” At the risk of oversimplifying quantum mechanics, he postulated that the number of transistors on a computer chip would double every 24 months. In other words, Moore expected computers to become exponentially faster and take up less and less space.

His hypothesis ultimately became what is known as “Moore’s Law.” And, while debated by experts in the field of computing, this principle has held up over the past 50 years of technological innovation. Today, there is probably no more visible outward sign of Moore’s prognostic prowess than the seemingly ubiquitous smart phone.

“A new iPhone CPU has 625 times more transistors than a 1995 Pentium,” and during the weekend the iPhone 6 launched, “Apple sold 25 times more CPU transistors than were in all the PCs on Earth in 1995.” Currently, there are more smart phones and tablets than desktop computers, and it is estimated that by 2020, 80 percent of the adults on the planet will have a smart phone.

The fact that everyone is walking around with a supercomputer in his or her pocket (or soon enough on his or her wrist) should do two things: make Gordon Moore feel pretty smart and eliminate all questions as to whether or not you need to be thinking about mobile connectivity as it relates to your casino.

There will likely be very few aspects of the player experience not impacted by ever-increasing connectivity, the least of which will be the games themselves. For the purposes of this article, however, we will focus on your casino’s marketing in order to frame up an understanding of the macro environment and outline some specific steps you can take to get moving in mobile.

The competitive set is changing. First things first. To understand the influence mobile will have on your marketing, you must define your market. Casino gaming competition, in the past, has largely been confined to bricks and mortar. And while the proliferation of land-based casinos has brought challenges to some (and opportunities to others), this type of competition has certainly been easier to spot and has provided casinos with a relatively manageable time frame to adjust their offerings and communication to readily take on another contestant for their gamers’ dollars.

The advent of online gaming, and the rapid growth of mobile gaming, has introduced a new type of competitor—one that has emerged quickly and scaled even faster.

According to SuperData, a group that tracks trends in online games, 2014 global revenue for mobile games reached approximately $21 billion, and social casino games represent the fastest-growing genre in the space, estimated to rake in $4.4 billion in 2015. Considering this figure includes very little (if any) real-money play, one can quickly conclude that the competition isn’t going to stay confined to the bricks and mortar in one’s immediate geography.

For now, the real competitive threat to your property relates to your players’ time and attention. The best evidence of the stakes involved in the mobile attention arms race may be the drastic increase in media advertising that game developers have purchased to push gamers to titles like Candy Crush Saga, Angry Birds and Clash of Clans.

In addition to digital channels, developers have taken to television with big-budget productions, the pinnacle being Kate Upton’s appearance in this year’s “Game of War: Fire Age” Super Bowl spot. The reported spend to promote the free-to-play, MMO mobile game was $40 million, a very believable figure based on the fact that it was nearly impossible to turn on the television without seeing the spot.

Within the casino industry itself, an increase in M&A activity also underscores the changing competitive landscape. Several leading land-based game manufacturers have been busy acquiring mobile game developers—IGT’s purchase of DoubleDown Interactive for $500 million in 2012 is just one high-profile example. And traditional gaming companies are not content to sit on the sidelines, demonstrated by Churchill Downs’ acquisition of mobile game producer Big Fish in a late 2014 deal valued at $885 million.

It’s an understatement to say the landscape is dizzying and even somewhat cloudy, given the already massive impact mobile has had on the category. So what should you do? How do you stay relevant and compete?

To compete directly in the mobile gaming space, your options include: build your own mobile games, license what’s available or acquire a company that builds games.

Each route carries its own set of pros and cons, and the likely answer is probably a phased combination of approaches. There is nothing wrong with trial and error, either. Gaming is a marathon, with intermittent sprints.

To beat them, don’t try to be them. A strategic approach to developing integrated players (on property, at home and on the go) is important, and, here, a lyric from Modest Mouse comes to mind:

Well, how the heck did you think you could beat them at the same time that you’re tryin’ to be them?

The greatest advantage that your property has over the mobile and social gaming set is that you exist in the real world. Your players may come for the games, but stay for the dining, the entertainment, the spa, the escape of a nicely appointed room.

In other words, you offer an experience. And once you integrate mobile gaming into your offering, you have a power tool to cross-pollinate online play and on-property play.

Candy Crush cannot offer their players what you can: a full-service, full-experience entertainment brand.

All games aside. The advent of mobile connectivity stands to impact all aspects of the industry. Again, there isn’t a guest touchpoint that won’t be affected. And the time to begin working on this is now.

Here are some steps to take to get started:

Outline your objectives. It’s smart to begin any new development, particularly one involving technology, by defining what success would look like. Work to organize your objectives into broad strategic buckets: increasing revenue, decreasing costs, increasing new business and increasing existing business. What can mobile do to affect these areas at your property? Breaking mobile down into digestible bits makes getting started a little less intimidating, and it also builds a strong business case for your efforts.

Determine your mobile strategy. For the last few years the question surrounding mobile development has been, “Should we build a native app or a web-based app?” The answer is, “Yes.” While the precise strategy should match your objectives, it is smart to utilize the mobile web and native applications in tandem. Mobile sites should be lightweight, fast and generally serve customer acquisition. Think of these as a wide net to attract new players to your brand. Native applications, on the other hand, are more robust and are widely used for entertainment, social networking, messaging and transactional utility. These applications are more labor-intensive (and costly) to develop and should focus on content that serves existing players: loyalty account information, point balances and offers.

Use your existing databases. Casinos are swimming in data, and the launch of a mobile offering should leverage your existing audiences. Utilize your email lists, Facebook and Twitter followers—and offer rewards for early adoption of your product.

Use your property. Again, think of it as “connectivity.” The great advantage to mobile is that you can use location to promote relevant offers in specific areas of the property. And you are not limited to advertising messages. Think about how your players interact with the casino—how can you help them enjoy their experience more? For instance, players are extremely picky about the games they love, so why not create a tool that helps them find the slots they play? What about a reservation tool that alerts players when there is an open seat at their favorite game?

It pays to advertise, digitally. There is nothing lonelier than an unadvertised product. Once you have a mobile offering, regardless of how niche it is, set aside some budget to promote it through paid digital advertising. You can hyper-target this messaging, and your potential users are just one click from loving your product.

Incentivize. Utility and usability are paramount with mobile, so your product should be something your players actually want to use. It helps to reward and incentivize continued engagement. Think about exclusive perks to offer your players who engage with your mobile product or platform, and be sure to ask for permission to send messages to your players via mobile—text or push notifications perform well.

Go with the MVP. Mobile is scalable, so you can start small. Software developers use the term “minimally viable product,” which describes a product that features just the core functionality that would allow it to be released. This approach is smart for a variety of reasons: it is cost-effective, allows you to test ideas and allows you to adjust the product in real time. If you’ve got an idea for a mobile tool for a guest, build it. Launch it to a small subset of players—it doesn’t have to be perfect—and test it. You’ll learn a lot, and you may wind up with the start of something that players love. Remember that Twitter started as a group SMS messaging app among friends.

What’s new? A lot of the basic functionality for mobile products in the gaming category is a digital variation on existing touchpoint themes to which players have become accustomed. Get a group together and brainstorm about new ways mobile connectivity can allow you to serve your guests. What kind of ride service could you offer by partnering with Uber? What kind of special concierge service can you offer loyalty members? How do you turn everyday activities or certain amenities on the property into a mobile game? What about employee recruitment and applications? How can you enhance a concert experience?

As mobile reaches complete ubiquity, the devices themselves will disappear. Maybe not from view, but they will certainly be less conspicuous. One day, your iPhone will be laughed at by a kid who thinks it looks like something from the Stone Age.

That day will be soon. In a few short years, people will be conditioned by a world of connected devices, and the idea that things are connected to the internet in order to function will be akin to thinking of your kitchen lights being powered by electricity off of a grid. Mobile won’t be referred to as “mobile.” All that will be left is the connected consumer.

The casino brands that adapt will win, and one way to make sure you’re among them is to place a priority on mobile now. Whether you begin building mobile games or produce a digital installation on the floor of your casino that interacts with guests as they pass by, just go for it.

The next several years present an opportunity to connect with your players and audiences in new ways—and the future belongs to those who work for it today. Ask Gordon Moore. He didn’t merely predict that computers would get faster and smaller.

He founded the Intel Corporation in 1968 and made it happen.