Live-dealer online games saw a spike in popularity during the shutdown, but they were headed that way before the pandemic. Here’s why. 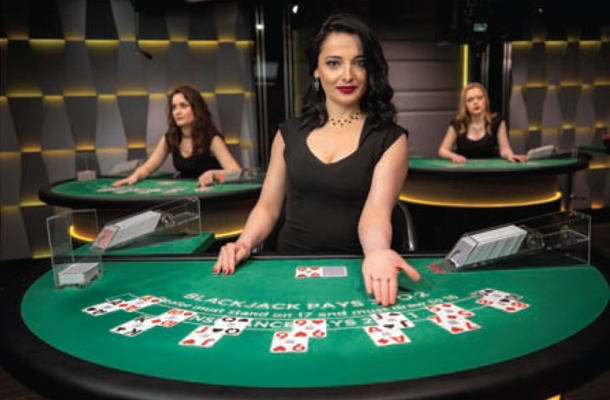 In 2020, casinos around the world were forced to close for months. When they reopened, it was with limited games and occupancy levels that are still in force today.

A concurrent spike in iGaming, often linked to the shutdown, was actually under way before the pandemic. New Jersey, for example, saw an increase of 87 percent in iGaming revenues between November 2019 and December 2020. And while much of the chatter lately has been about the rise of sports betting, last November iGaming in Jersey pulled in 82 percent more than mobile sportsbooks.

As Josh Swissman of the Strategy Organization recently told the Las Vegas Review-Journal, “iGaming is really where the potential bigger impact is… The iGaming customer is much more valuable.”

Which brings us to live-dealer online games, hosted in real time by real people from brick-and-mortar casinos or remote studios. Though these games predated the pandemic, they may be especially well-suited for the Covid era, offering a fusion of land-based and virtual gaming that serves two cohorts: gamblers who’ve always preferred gambling online, and casino fans who can’t or won’t visit a physical property right now, or are going less often.

With live-dealer games, blackjack, baccarat, roulette and so on are played as they would be in a real casino, but by online players in virtual seats who can communicate via online chat with the dealer. As the dealer draws the cards, each one is swiped over an electronic scanner that transmits the face to the players.

A growing number of players prefer live-dealer games to those powered by a random number generator (RNG), for a couple of reasons. For some, watching a human being draw the cards in real time gives them greater confidence in the integrity of the game. Some like the personal touch of seeing and live-chatting with an attractive dealer, male or female; it’s closer to the communal, social experience of a gaming floor.

Then there’s the simple fact that most of our activities, including entertainment, have migrated online, at least in some form.

“Video is dominating everything right now, so it’s natural that it would be popular in gaming too,” says Todd Haushalter, chief product officer of Evolution Gaming, one of the biggest players in the space. Founded in 2006, Evolution matured in Europe and now has a growing presence in the United States, with live-dealer games in New Jersey, Pennsylvania, West Virginia and Michigan.

“TikTok, YouTube, Netflix… This is just how people want to consume today,” says Haushalter. “If I had to bet my paycheck on a digital game or a live game, you bet I’d pick the live game.”

With improved technologies, live table games can play as well on a palm-sized screen as on a tablet or a desktop, he says. “All design defers to the one-handed phone player; even the studio is designed to be narrow to optimize for this view. Almost all of our games now involve zooming and multiple cameras to create a lifelike, immersive feeling that builds trust and brings you into the game.” Interestingly, he adds, “Players can easily turn their phone and get a much bigger, more beautiful video stream, but overwhelmingly, they prefer to play in portrait mode. I see a lot of companies ignore this, and it’s a big mistake.”

Mattias Stetz, chief operating officer of Rush Street Interactive (RSI), which utilizes Evolution software for its live casinos at PlaySugarHouse.com and BetRivers.com, agrees that the result is “as close as you can get online to a real brick-and-mortar casino experience, yet it’s the ultimate in convenience. The games are run in real time and payouts calculated in seconds, so players online or on their mobile devices feel as if they’re sitting in a real casino while actually in the comfort of their home.”

Enhanced connectivity via 5G and related technologies are expected to propel the market even more; 5G is expected to have 1.7 billion users around the world by 2025, providing broader bandwidth for super-fast downloads, and more reliable connectivity. “If the player has 4G or 5G or clear Wi-Fi, they’re going to get a fantastic experience,” says Matthew Sunderland, vice president of gaming for BetMGM. “The resolution and the speed are unbelievable.” Of course, RNG games are still popular. “In some cases, you have to queue up for a (live-dealer) blackjack game, whereas RNG blackjack is always available,” says Ed Andrewes, CEO of Resorts Digital Gaming in Atlantic City. Also, some live-dealer games aren’t offered 24/7. RNG players “can take their time and play at their own pace—they’re not waiting to draw a card or holding up other players at the table as they make a decision.” Games with a spinning wheel such as roulette can be played by unlimited players across multiple jurisdictions.

“Random-number-generator table games are still popular,” continues Andrewes, “but a section of our client base loves the personal interaction of a live game, and we’ve seen the migration of some (RNG) players toward the live dealer, too.” 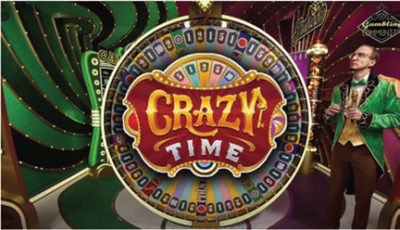 Where it’s headed: more live-hosted games along the lines of Evolution’s “Crazy Time” could join live table games in the U.S.

Blackjack is the most popular live-dealer game in the United States, according to Haushalter, followed by baccarat, roulette and specialty games like Three Card Poker and Ultimate Texas Hold’em (roulette is tops in Europe). Evolution is focused on building a base around core games in the U.S., and then will “layer in more rich game-show concepts.”

The use of the term “game show” is indicative of the games’ direction; in fact, Evolution doesn’t refer to its live-game hosts as dealers but presenters. Like Vanna White, a winning personality may be as vital to their success as letter-turning (or card-dealing) skills.

“There’s a lot more game show content being worked on for the live environment,” says Sunderland, who points to Evolution’s “Crazy Time,” released in Europe in 2020, as a prime example. “It’s basically a game show with a presenter and a spinning wheel that has 100 different values on it; where the wheel stops is what you get paid out.” He envisions a trend in which online games like blackjack or live bingo could become much more animated and interactive, with the type of game-show bells and whistles that have made Wheel of Fortune a perennial hit, on TV, online and on the casino floor.

“There’s so much innovation in the live space that’s not present in RNG table or slot games,” Sunderland says. “If you can imagine for us if Jamie Foxx, the frontman for BetMGM, were online in a Q&A session where he teaches blackjack—the opportunities are endless” within the parameters of state regulations; he envisions a complete omnichannel convergence of live and retail that will better serve all players and exponentially grow the base.

In a documentary about the development of “Crazy Time,” Haushalter likened the game’s whimsical components—a magical red door, spinning gold coins, an animated backdrop reminiscent of Saturday morning cartoons and a host dressed like a circus ringmaster—to elements from The Wizard of Oz and Willy Wonka and the Chocolate Factory.

“The idea was to have a game so fun that you’ll enjoy just watching it without playing,” he says in the video. “That was literally the standard we were going for. Obviously, it’s better if you play.”

With Evolution’s recent acquisition of NetEnt, the world’s biggest online slots company, “I’m really excited to bring the worlds of slots and live casino together for some very fun stuff that I think players are going to love,” he says. “You’ll see this sometime before summer.”

Could the growth of online gaming options and lingering crowd concerns ultimately be detrimental to the traditional casino experience? Resorts’ Andrewes thinks not.

“It’s been well documented that the online business has done well during this period, without a doubt. Live-dealer games have grown at the same rate and perhaps more quickly than the overall business, because it was a natural place for the bricks-and-mortar players to gravitate while casinos were closed. But lots of studies are being done to try to measure the effect of online and the cannibalization effect on the bricks-and-mortar market, and in every jurisdiction, across many products, it’s been shown that the two are pretty complementary.

“We fully expect that once casinos are fully open and we put the pandemic behind us, players who’ve enjoyed engaging with a live dealer online will come flooding back in. There’s no better retention tool than to give our customers a great experience on-property, which makes them loyal to the online brand.”

Sunderland tends to agree, with caution. “It depends on how much the retail experience has changed in the eyes of the consumer, and only time will tell, once the casinos get back to full operating capacity and have all their restaurants and bars open again.”

That said, he adds, “But I think there’s loyalty in customers who go to casinos, and it will come back. People will probably want some sort of release once things calm down, and where better to play than a land-based casino?”

Meanwhile, the audience for online live-hosted games continues to swell. According to Market Research Future, the global iGaming market will grow at a 13.2 percent compound annual growth rate based on the 2018 market value of $119 billion. That’s a lot of seats to fill.

Going forward, says Haushalter, Evolution “plans to be in every state that will have us. The growth has been fantastic, and we’re layering in products slowly as we learn what works. I think the growth in the U.S. is going to be phenomenal for casino games, because sports betting is popping up everywhere and the demand to bring casino games in next will be strong.

“It’s a little like YouTube, in that if it always serves you well, you have no desire to go elsewhere.”