House hearing reveals divisions in Congress and among gaming interests 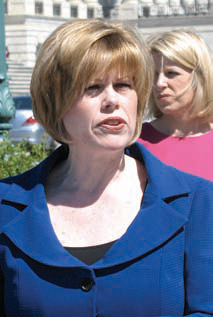 The fading hopes that an online gaming bill of any sort could pass Congress late in this session dimmed a bit more last month after the first hearing on any bill was held by the House Commerce, Manufacturing and Trade subcommittee. The hearings were set up to consider a bill that would legalize online poker introduced by a subcommittee member, Rep. Joe Barton (R-Texas).

While no vote was held, the uncertainty raised by testimony before the committee caused Rep. Mary Bono Mack, the chairwoman of the committee, to say that recommending the bill to the “super-committee” of congressional members is premature. The super-committee, borne of the budget impasse in early August, is charged with cutting more than $1 trillion of costs, hopefully complemented by increased tax revenues, which could be provided by internet gaming.

“There’s just way too much here that has to be fleshed out to rush it and to put it into the work of the super-committee,” Mack said. “We have to find a balance of moving it and balancing the technological problems with the policy problems. I think to rush it would be a mistake.”

Some members of the super-committee have expressed interest in internet gaming. The group was required to produce its recommendations by November 23. Congress can only fully accept those terms or turn the entire bill down. If no deal is reached, automatic spending cuts go into effect, including drastic reductions in military spending.

Barton said his bill is designed to clarify federal law over internet gaming, which is centered around the Unlawful Internet Gaming Enforcement Act of 2006.

“We passed a law that is unenforceable,” Barton said. “It’s a bad law regardless of what side of the debate you’re on.”

The commercial casino industry is asking for a bill—not necessarily Barton’s—that would allow legalized online poker for U.S.-based gaming companies, with regulations that would block participation from foreign companies. Supporters couch it as a law enforcement and consumer protection issue.

Some of the elements of Barton’s bill include a reliance on states’ rights, giving states the ability to opt out of any legalization process. Regulations will restrict licenses to organizations that can pass rigid background checks. The U.S. Commerce Department would become the oversight agency. There is no stipulation for tribal participation, but Barton insisted that tribes could be a part of the bill.

“We are not anti-Indian, not pro-Indian,” said Barton, who claims to be part Native American.

National Indian Gaming Association Chairman Ernie Stevens recorded an impassioned testimony that acknowledged that not all tribes are united in their views of internet gaming, but they do agree with some basic principles.

“Congress should not pick winners and losers if or when it decides to establish a new industry such as internet gaming,” he said. “Any federal internet gaming legislation must also allow tribal governments to have an early entrance into internet gaming, with a limited period of exclusivity. Carving out exemptions for certain states or gaming industries while violating existing tribal-state compacts is unacceptable to tribal governments.”

Stevens said tribes would be the primary regulators of their own internet gaming operations, with the National Indian Gaming Commission having federal oversight.

“The NIGC is the only federal agency in the United States with experience in regulating any form of gaming in the nation,” he said. “Any internet gaming bill must provide that the NIGC shall be the exclusive federal agency to provide oversight of gaming activities by Indian tribes. This provision should not supersede tribal governments’ rights to regulate internet gaming.”