Pouring It On-WMS continues to redefine the slot machine 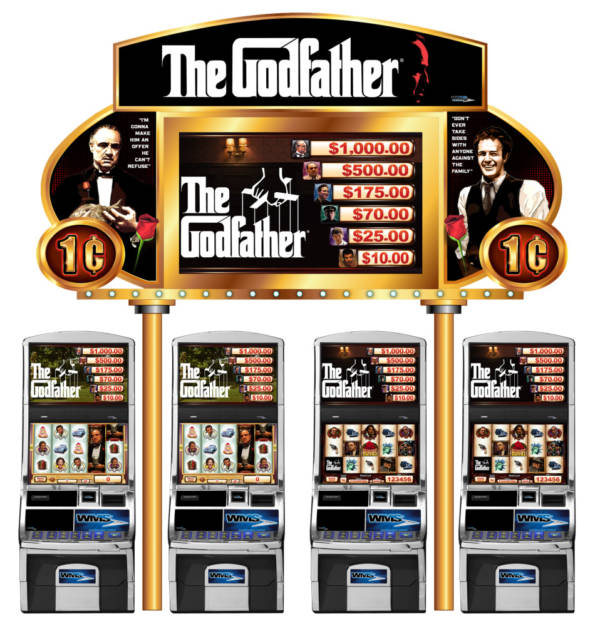 Some slot manufacturers like to keep what they are doing in a particular year under wraps until the Global Gaming Expo trade show floor opens.

While Chicago-based WMS Gaming may still keep some advanced technologies and specific game titles secret until show time, everyone in the industry knows where the company is headed.

That’s because CEO Brian Gamache and Larry Pacey, executive vice president of global products and chief innovation officer, told the industry nearly a decade ago. Not long after the turn of the 21st century, WMS started talking about the slot floor of the 21st century.

As the year 2010 wraps up, anyone looking back can see that WMS has remained true to that vision. From “Monopoly Big Event’s” common bonus round—the first such event an entire bank participated in at once—to much-copied game styles like the virtual reality-like Sensory Immersion, to the Transmissive Reels method of animation on top of reel-spinning slots, to Adaptive Gaming slots like Star Trek and last year’s amazing hit, “Lord of the Rings,” no slot-maker has released games in the past decade that have been more groundbreaking, or more talked-about by slot players.

What’s truly remarkable about the decade-long journey of WMS is that the manufacturer still seems to just be hitting its stride. “There are two confluences here,” says Pacey. “First, we’re making more content than ever before; we have more games at G2E this year than ever before. Second, our products are getting more effective, more capable and more exciting in what they can do.”

WMS arrives at G2E with a remarkable 120 new game titles and a booth that will offer something for everyone.

If any one game exemplifies everything WMS has brought to the table in the journey toward networked gaming, it is last year’s hit release, “Lord of the Rings.” So many of the manufacturer’s innovations—the Sensory Immersion play style, the multiple bonus events, the wide-area network that allows games to be picked up where the player left off on a new date—are wrapped into this game, that it can be viewed as a microcosm of advances in slot technology.

Perhaps the most innovative part of the experience is “Player’s Life,” the website that allows players to continue to make progress on a game online, for free, and have the progress count for the next casino visit. The first Lord of the Rings slot, based on the first book of J.R.R. Tolkien’s legendary trilogy (and the first installment of the 2001-2003 film series) The Fellowship of the Ring, followed the journey of the hobbits in the story with eight progressive bonus events.

The idea has been nothing less than revolutionary. “When a player unlocks a bonus at home, he can’t wait to get back to a casino the next day and play that bonus,” says Phil Gelber, vice president of game development for WMS. “That’s a powerful tool. It is something the casinos never had before: a way to drive players from the internet back to the casino. That’s a new set of tools casinos never had before.”

Gelber adds that casinos are now beginning to integrate the Player’s Life website into their own marketing, including a link to the home-play site on casino operators’ sites. “Operators are heavily leveraging the capabilities of this service,” he says. “One operator has even tied the Player’s Life account to its own players reward system. The operators’ players club card automatically enrolls you in Player’s Life.”

The Lord of the Ring franchise is only beginning, and there will be many more to use the networked setup—which began, says Pacey, when WMS “laid out all the pipe” with the Star Trek game, setting up the wide-area network that allows players to log in anywhere in the country. He says the casino operators are helping the company expand the idea with Lord of the Rings, including a new version to be launched at the Global Gaming Expo.

Category-Killers
WMS has become known for its category-killers in several different game genres, and this year’s record-setting G2E lineup is no exception, starting with the first sequel to Lord of the Rings, “The Two Towers.” Four new bonus events depict the hobbits’ journey points in the second installment of the trilogy, from the “Ents,” the tree-like creatures of Fangorn Forest, to the pursuit of the hobbits by Gollum, to the battles along the way to the evil land of Mordor.

“There is a lot of innovation we’ve been working on for years, but which has culminated in Lord of the Rings,” says Pacey. “There are a lot of radical new user interfaces. The grandiose picture of Lord of the Rings is that it is the largest engineering effort ever by a slot manufacturer. It is a game with 12 bonus rounds, network infrastructure, a private network—it is a substantial undertaking. What is exciting is that at G2E, you’re going to see more games taking advantage of it.”

“We’re delving into the experience of what a slot game is,” adds Gelber. “Now comes the fun part.”

Speaking of category-killers, WMS arrives at G2E with a new version of the game that has, in large part, propelled its success the past few years, “The Wizard of Oz.”

The latest version of the Oz franchise, “The Great and Powerful Oz,” is the first community-style game of the series. In fact, just like “Rings,” this game utilizes all the weapons in the WMS game-development arsenal. It is a Transmissive Reels game, with video animation added to mechanical reels. It is a Sensory Immersion game, with the Bose surround-sound, vibrating chair and computer power of the original “Oz.” It has the “Big Event” feature of players earning multiplier advances through base-game play. It is a wide-area progressive game.

And the community feature adds a new dimension. When the bonus game is triggered by the bank’s controller, every player goes into the bonus at the multiplier they have earned. During the Great and Powerful Oz bonus, all eligible players are awarded seven free spins at the earned multiplier. Each player chooses one of the film’s main characters—Dorothy, the Scarecrow, the Cowardly Lion or the Tin Man. During each free spin, the game awards one of four spin enhancements, such as wild symbols, wild reels or multipliers, to one or all of the Wizard of Oz characters.

Additionally, as in the original “Oz” game, Glenda the Good Witch appears randomly, in this case to award a free spin enhanced with wild symbols, wild reels or a multiplier.

The Sensory Immersion series will be well-represented at G2E. In addition to the new Oz game, there will be two entries in the campy 1950s science fiction genre—“Attack from Mars” and “Revenge from Mars.”

Premium Video
WMS will prove at G2E that the company is still one of the very best at conveying a licensed brand with new themes from both the movies and television.

From the movie genre comes “The Godfather,” based on the iconic 1971 mobster movie. All of the film’s memorable moments are depicted in bonus events, from the base game titled “My Daughter’s Wedding” to the battles of the war between the five families depicted in the film. James Caan, who played Sonny Corleone in the original film (and in a cameo in Godfather II), was tapped to provide voice-overs for the game.

From TV comes “The Office,” based on the popular TV show starring Steve Carell.

The manufacturer also continues its love affair with the legendary board game “Monopoly” with new games in the series called “Monopoly Bonus City,” featuring 3D animation and a “Mega Bonus Game” played out on the giant overhead Monopoly board; and “Monopoly Around the Globe,” featuring Transmissive Reels technology and both local-area and wide-area progressive jackpots.

In mechanical spinning reels (all with Transmissive Reels video overlays providing animation), “Mermaid’s Gold” offers several bonus events with an ante; “Top Star” offers a dual stand-alone progressive with a mechanical top-box bonus; and “Hot Hot Super Respin Progressive” takes one of the slot-maker’s most popular game mechanics—a re-spin of the reels for multiple chances at winning combinations—and applies it to a multiple-progressive slot. It can come in handy in this game in particular, since two winning symbols plus a progressive symbol wins the progressive prize indicated.

There also will be new game mechanics features on several WMS games. One of the best is “Win It Again,” which stores the player’s last four jackpots until a special symbol lands on the reels. When the symbol lands, the player is awarded any current wins plus the four stored jackpots. Several games also reprise the “Spinning Streak” mechanic, which re-spins reels around winning combinations.

The Portal
WMS will also expand on what was one of the most groundbreaking introductions from last year’s trade show, the “Portal” technology. Using a networked system, the Portal application allows progressives, community bonuses, mystery events and even proprietary promotional merchandising to be integrated into one group of games.

Using a progressive controller, a bonus can be added to any game from any manufacturer. The first portal application, “Ultra Hit Progressive,” is already successful in the field.

“Over the first couple of months, we’ve seen roughly a 30 percent premium in coin-in over the same game without the progressive feature,” says Gelber. “Also, it is extending the life of the base game. By putting a new portal experience on a Jackpot Party base game, performance goes up, and people keep coming back to that game.”

According to Pacey, the entire base game library of WMS, video and mechanical, is adaptable to the Portal technology. The casino can download the secondary application to appear on the game screen. “The two games match up to create a new mathematical experience,” Pacey says. “We can have the common experience on a whole bank configured with different base games.”

All of the Portal applications have an element of anticipation—players know through visuals and audio when a secondary bonus game is approaching. A new Portal game, for instance, uses the famous piggy bank from the legendary WMS game “Piggy Bankin’,” which continues to fill up with coins as players on the bank play. As the bonus jackpot round approaches, the pig begins to bulge and crack.

According to Pacey, WMS is busy developing a complete library of bonus games for Portal applications. “We just launched a second networked gaming studio. And they’re generating new Portal applications all the time,” he says. “Our plan is to release about one per quarter.

“Also, we’re offering operators the ability to customize and theme some of these Portal applications with their own branding, using their own strategies. This is a tool operators have never had, to integrate their branding into the networked applications they’ve put on their floor.”

Early indications are that operators are going to use the Portal technology liberally. “If you go to Mohegan Sun or Turtle Creek casino and look at the Ultra Hit Progressive game, they’ve got every game theme in our library running underneath it,” Pacey says. “All the base games we’ve released in the past year are already enabled for Portal, and we’ve already built the library of games that will go with this architecture.”

Pacey says the best thing about WMS Gaming’s many game styles and groundbreaking technologies is that the past several years have been the “setup” years. With all the new game infrastructure in place, he says, the manufacturer is only beginning to tap the new technologies to create new play experiences.

“What’s really exciting is that we’re still in the early innings,” Pacey says. “We’re just now starting the scratch the surface, with only one game in the field with connected web services, and the Portal out in the field, also still in its infancy.

“What we’re showing is the dawn of a new era. This is where the rubber meets the road.”