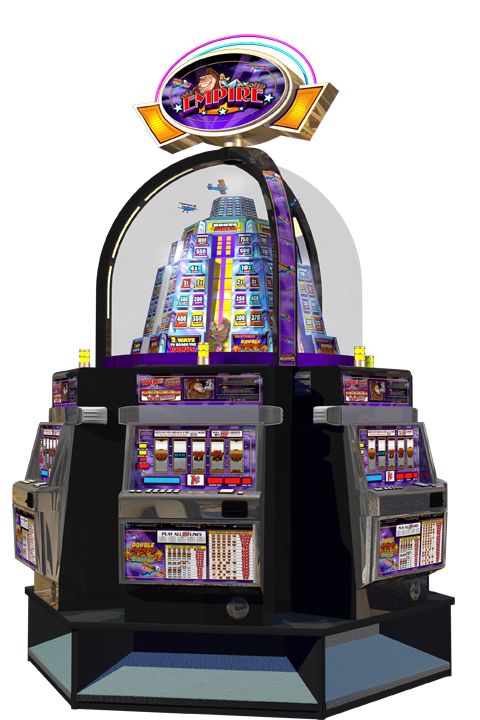 With names like “Visitors from an Udder World” and “You Bet Your Ass,” it’s not unusual that the first reaction to a new game by AC Coin & Slot be a laugh. Most games from the New Jersey-based slot-maker—the original specialist of the slot bonus game—are funny and entertaining. But for operators, the real fun comes with how much the games earn.

Take the first game on the “Double Play Platform,” launched last summer. The series places a double-wide video screen atop two five-reel base games. Common bonus rounds include a main event and the manufacturer’s ace in the hole, a feature called “Quick Hit” that feeds a mini-bonus event every half-dozen spins or so.

Players have been eating this feature up in the series’ first release, “Phat Cats.”

“We’ve placed it in seven different jurisdictions, and two times the house average in earnings is the minimum,” says Jerry Seelig, AC Coin’s executive vice president and general manager. Seelig, who along with top R&D man Larry Henshaw heads up game design for the company, says the Quick Hit feature augments the fun themes (Phat Cats uses bling-laden “cool cats” and the 1980s hit “Stray Cat Blues” as its backdrop) with what he calls the “time value of money.”

“In other words, if you sit down with a $20 bill, you should expect to be there longer than a minute or two,” he says. “Combine that with the entertainment experience, and hopefully, the time value of their money works.”

A year ago, AC Coin made a big change in its business model when its arrangement with slot manufacturer International Game Technology changed from that of exclusive distribution of IGT games in Atlantic City and the Caribbean to a situation in which IGT essentially serves as an OEM supplier of base games for AC Coin’s proprietary bonus games.

AC Coin, founded in the Atlantic City suburb Pleasantville in 1978 by Mac Seelig (Jerry’s father, still the company’s CEO), made its name in the nascent Atlantic City industry supplying not only slots but slot stands, furniture and other necessities. Its long-term identity would emerge, though, during the late 1990s as a creator of innovative top-box bonus games to go with the IGT slots it distributed.

The proprietary bonus games propelled the popularity of AC Coin’s brand with games like the lottery-themed “Slotto,” the “Big Roller” series of top-box games headed by “Bankroll,” and “Empire,” which placed a replica of the Empire State building atop an IGT slot and had a miniature Kong-style gorilla climbing toward a “bonus zone.”

In October 2009, AC Coin announced that IGT had bought out the exclusive distributorship, and that its bonus games were now for sale independent of IGT—previously they had only been available on a lease/participation basis. The new business avenue boosted game sales by opening up the vast for-sale market previously unavailable to the company. (AC Coin retained the right to use IGT base games and platforms to develop its proprietary offerings.)

AC Coin vowed to ramp up production, thanks to its 80,000-square-foot production facility in Reno. The company is licensed in 180 jurisdictions across North America and Canada.

Seelig says the ramp-up has gone according to plan. “It’s playing out just as we hoped,” he says. “We’ve shown that we’re making games that earn more money, so they’re more in demand. We’re excited about the potential.”

“The biggest thing we’ve seen is that our customers are now becoming repeat customers,” adds Marketing Director Aimee Schultz. “The customers who were early adapters of the games available for purchase are now saying, ‘Wow, they are earning!’ and coming back for the second round of for-sale games, while back-filling with recurring-revenue games. It’s the best of both worlds.”

Big Splash
The revamping of AC Coin culminates at this year’s Global Gaming Expo, with the largest game display the manufacturer has offered in years. In what Seelig calls the “dawn of a new day,” the slot-maker will launch 12 new titles at G2E, in a display that will feature a total of 27 games.

At the top of the list will be new offerings in what has been the company’s hottest platform, the Double Play series launched last summer with Phat Cat. There will be three new titles for the series on display, including the second release, “Rock and Roll Legend.”

This rock-themed game has been the subject of a lot of R&D and customer research since it was first conceived. With the success of Phat Cats, Seelig says the company wanted to maximize the potential of the Double Play format in the second release. “We had a lot more time in development for this game,” he says, “and we did a lot of things to make the game more entertaining. We added the Quick Hit feature, and added dynamic characters.”

Those characters are the rock “Legends,” 3D rockers who appear on the overhead screen to play guitar riffs that cause different-colored notes to rise over a musical staff of sorts. Bonus amounts, then multipliers, float across the grid, and if a note touches an award of the same color, the player gets it.

The Quick Hit feature, every seven spins or so, leads to one of three bonuses. A bonus 3D animation clip plays and one of the values is awarded, with an average bonus of 135 credits.

As a follow-up, AC Coin is using rock music to drive the next offering in Double Play, called “First Class Adventure Jackpots.” The common bonus in this one displays popular destinations across the U.S. on a map, and falling tiles connect with the destinations for bonus awards.

Finally, “Slingo Bonus Surprise” takes the popular internet game first presented in a three-player community setup and moves it to the Double Play format. “The three-pack Slingo was a great success, so we added new math and some new game concepts we developed,” Seelig says, including a “Super Joker” and the ubiquitous Quick Hit bonus.

“Quick Hit is a great feature,” says Seelig. “In this economy, people need reinforcement, and that feature does it in a very entertaining manner. The beauty of this Slingo game is that the bonus feature and the slot machine itself really work well together. It allows for great entertainment.”

The two-player community style will get a new treatment to be launched at G2E. The game “Masquerade Bonus” will feature a new two-player format centered around a giant, 55-inch, high-definition LCD video screen. “The fun with having a bigger screen is that you can create a lot of entertainment,” Seelig says. “Anyone can make a bigger screen; our goal is to use that screen and all the other technology out there to make a very, very exciting experience for the player.”

“We’ve put a lot of time and energy into this game, because it’s really unique,” says Henshaw of the new format. “It offers a game play that is uniquely different than anything we’ve done before.”

Feeding on Success
In addition to the new formats, AC Coin is launching several games that improve on success that’s already been proven in the field. Specifically, the company is offering new takes on its other community styles—the original six-game setup and the three-machine format that followed it up.

In the giant six-machine community format—utilized so masterfully in the latest version of “Empire,” which features a six-sided Empire State Building for the common bonus event—AC Coin offers a hilarious new bonus game called “Visitors from an Udder World.”

As the name suggests, the theme is built around cows—in this case, cows from outer space. In the bonus round, cows are sometimes beamed up to the mother ship. Seelig says that although the six-player format, launched in 2004 with “Super Slotto,” involves a lot of production work for a comparatively small manufacturer like AC Coin, the big units remain big earners.

“They’re hard to produce, but people go crazy for them,” he says of the six-game units. “The MGM Grand in Las Vegas installed the original six-player Empire, and installed a second six-player unit a few months after the first one went live. The huge Super Slotto we launched in Florida is still going strong, with a tremendous following four years later.”

The year’s big release in the three-machine community play style is “You Bet Your Ass,” with another hilarious theme centered around animated donkeys.

AC Coin’s G2E offerings are rounded out with new versions of longtime hit themes—“Slotto Instant Win” and “Great Goldfish Giveaway” in the lottery theme; “Double Up” and “Cirque De Prime” in the Big Roller Series, using the giant scrolling bonus originated in “Bankroll;” “Double Up” in the Big Roller Community Series.

Adds Seelig: “Our games are earning. Period. End of story. We make games that earn, and we’re standing on that.”