Covering the Bases: Bally pumps out innovation in a wide array of game styles 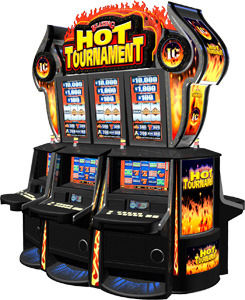 It’s no secret that casinos will soon be ready to renew aging slot floors with a flood of new products.

For two years, the world’s oldest slot maker has defied the recession, growing revenues through a combination of superior technology and a broadening market base. The company’s Alpha platform, developed after the acquisition of the former Sierra Design Group, has thrust Bally back to a position it once owned exclusively-the elite of the slot business.

Now, as the next generation of the platform, Alpha 2, is perfected, Bally is preparing to dazzle the industry with just how diverse its product range under Alpha has become.

“Bally is still this unique company because of such a wide breadth of products,” says Mike Mitchell, Bally’s vice president of game development. “We can service so many different environments.”

For the past two years, as most slot manufacturers struggled with domestic sales, Bally made headway with its new Alpha game styles and cabinets-most groundbreaking have been the industry’s first real wide-screen format in the form of “CineVision;” multiple-progressives “Hot Shot” and “Quick Hit;” and a variety of games on the V32 cabinet, with a vertical monitor originally designed for the company’s video roulette game, but which has crossed over to become one of Bally’s most popular game styles.

Meanwhile, Bally has continued to expand into new markets around the world-a low-cost, high-return hedge against a general slowdown in domestic sales due to the recession. “There has been significant growth opportunity internationally,” says Dan Savage, vice president of marketing for Bally. “Over 25 percent of our growth was in international business last year, and there is lots of opportunity to increase that further.” Savage says some jurisdictions have been “tough from a compliance point of view,” but that Europe, Asia and Australasia continue to be very attractive markets.

The real potential for the near term, though, is closer to home. “There is a ton of growth opportunity domestically,” says Savage.

Mitchell agrees that North America is in line for a huge replacement cycle. “I don’t think the floors have ever been older than they are right now,” he says. “The average age of slots on the casino floor domestically is greater than it has been for the past 10 or 15 years.”

Bally is ready, he says, to provide the replacements, both in the game styles that have been ultra-hot for two years and in the game lineup for G2E, which will be a powerful mix of new games and revivals of old game styles using the newest technology.

Additionally, Bally will show new technology that will bring all game styles-including the company’s classic reel-spinners-squarely into line with what Mitchell calls the “paradigm shift” to server-based gaming.

Hot Styles
Bally’s lineup of games for G2E will, at first, build on some of the huge successes the slot-maker has had during the past few years. Not the least of these has been the V32 vertical-monitor game style, which began with roulette but has since been the platform for some of the most successful Bally slots of the decade.

At the forefront have been the “Quick Hit” series of multiple progressive slots and “Fireball,” which uses the large vertical screen for a dazzling fireworks-in-space display to enhance another of  Bally’s most successful multiple progressives, “Hot Shot.”

“The V32 cabinet definitely has some legs, and it has given us big penetration in the video segment,” says Savage. “Quick Hit Platinum has been a hammer! Fireball is the No. 1 penny game at Grand Hinckley in Minnesota.” Mitchell adds that the original video roulette game on the V32 format has continued to be one of the company’s most popular games. “By next year, we will have 30 titles on the V32 format,” he says. “A year ago, we had one.”

Another big introduction in V32 is “Hee Haw,” a revival of a title from Bally’s former video series that is greatly enhanced by the capabilities of the Alpha platform. Multiple bonus events recall much of the comedy from the legendary country music/comedy variety series in a two-level progressive version of the game. “Hee Haw was very popular in our S9000 format; we’ve brought it back by popular demand,” says Mitchell.

Other high-profile titles to be launched on V32 include “Playboy-Girls of Canada” and “Breeder’s Cup Turf Edition.”

Additionally, the company is launching two complete new game series on V32, “Crazy Cash” and “Magic Money,” each with several individual game titles. Also on V32 this year will be 10 games from Australia’s Ainsworth Ltd. That slot manufacturer, founded by slot-industry legend Len Ainsworth, provided game content for the V32, which has a player interface similar to that used by the Australian company.

Reels Rule
“Any discussion of Bally slots should start with reel-spinning games,” says Mitchell. “We’ve gotten a lot of requests to renew our classic reel-spinning slot machines, so that’s one of the areas we will lead with at the show-around 30 classic, high-denomination slot machines.”

“There are between 40,000 and 50,000 S6000 (reel-spinners) in the market that are getting long in the tooth,” adds Savage. “The casinos still want those games, so we’ve re-created them in our newer systems while maintaining the classic design.” The newer format means a wider presentation, with wider reels and a top-box LCD monitor replacing the old slot glass. The wider presentation also means the newest Pro Series reel-spinners will be handle-less-the absence of handles fits the wider games into the same footprint, and the fact that the new cabinets are thinner means more room for aisle space.

These traditional games are joined by steppers in all of Bally’s newer formats, including the V32-spinning reels are placed under striking vertical bonus or multiple progressive displays in games like “Ultimate Tower of Power,” “Draw, Match, Win!” and others in the Digital Tower Series, as well as reel-spinning versions of Fireball and the new “Instant Fortune CineReels,” a progressive on Bally’s “QuarterMillion$” $250,000 wide-area link.

Also on the V32 cabinet is a scatter-pay slot series called “243 Ways to Win.” One of the first games will be “Reel Money Scatter,” an extension of the Hot Shot play mechanic with a video wheel.

This year, Bally also brings spinning reels into the world of networked gaming with two new technologies designed to fit spinning-reel games into server-based setups. “Transparent Reels” presents mechanical spinning reels with a video overlay for graphics and bonus features. The video screen is touch-enabled, for interactive bonus events in a reel-spinning slot.

Games are already in the field with the technology added to five-reel steppers. At G2E, Bally will introduce three-reel steppers using the Transparent Reels video overlay. New titles include “Dragon Dynasty,” “Twin Tigers” and “Hot and Wild Blazing Stars.”

Finally, Bally will launch another new technology at G2E that will neatly fit reel-spinning titles not only into networked floors, but into jurisdictions where only video gaming is permitted. “Reel Image” places reel images on a horizontal video screen with a surface that is curved like the surface of a mechanical reel. The result is a dynamic set of images and animation on reels that truly resemble mechanical spinning reels.

“Reel Image allows us to leverage our stepper portfolio into video-only markets,” says Savage. “We have an extensive lineup of great stepper products we can now put into an all-video market like Minnesota.” He says placing Reel Image slots next to flat-screen representations of reels reveals a greater authenticity to the true look of traditional reels. Bally’s engineers have even added little touches like having the reel images “wobble.” The reel-spinning setup, of course, can disappear for full on-screen animation. Moreover, he says fully downloadable content can be placed into this format in networked setups.

In all, Bally plans to introduce no less than 150 new stepper titles by next April, according to Savage.

Wheels and More
Reel Image is only one of several new game series to be included in Bally’s G2E lineup. One such series capitalizes on the manufacturer’s recent court victories involving its right to use a particular bonus feature on its slots-the wheel.

The “Spinnovation Series” includes both stepper and video titles with top box bonuses incorporating a spinning wheel. Leading this series will be new versions of some of the most popular Bally slots.

“Monte Carlo Royale” is a series that incorporates several base games into the elegant Monte Carlo theme, with its familiar roulette-style bonus wheel. “Hot Shot Cash Wheel” adds a spinning bonus wheel to what has arguably been Bally’s most popular slot game.

One of the most innovative new games in the series is “Cash Spin,” a stepper slot in the V32 cabinet with the Transparent Reels video overlay. The unique part is the bonus wheel, which employs a new technology called “U Spin It.” It is a virtual wheel, but the player actually reaches up and physically spins the wheel. The wheel reacts to the player’s physical pull, spinning more quickly or slowly according to the strength of the player’s action. It is a very authentic effect.

In all, there will be six different new Bally wheel games at G2E.

Other new game styles include “Blazing Hot Tournament,” a new community game with a thermometer-style on-screen bonus meter and large LCD displays above the games for a common bonus round.

“DualVision” makes a return this year with a new setup and several new games. This game style, introduced last year, is designed for two. The new configuration places two games in a circular configuration called “Penta-Pod.” The slots are designed so bonuses can be played both cooperatively and competitively. The first two games in what will be another new series for Bally are “Two For The Money” and “Race To Riches.”

Bally has a number of other new innovations up its sleeve this year. “Old School” is a new series of classic games. The company’s core video library will double in size this year. Two new cabinet styles will be introduced as well-the Pro Series V22/26 Slant Top and the V22/22 upright. (The numbers indicate the diameter of the wide-screen game formats.)

Bally’s system products will, of course, have their own area at the company’s G2E booth. Bally will display its “Networked Floor of the Future” suite of server-based applications-the Blazing Hot Tournament community-style game is one of those networked products-along with the latest versions of its leading slot and casino management systems.

Also featured will be Bally’s “Command Center,” a server-based solution that enables operators to view, examine and manage the floor configuration from a central location, with links to machines, player-tracking displays and peripherals; and “CoolSign,” a property-wide media management system that gives operators control of digital signage around a property.

Other marketing and promotional tools to be displayed include Power Card, a stored-value care solution that Bally calls an “electronic wallet;” and “iVIEW Display Manager,” an intelligent controller that enables casinos to present messages on the main game screen in a “screen-within-screen” setup.

For Bally, though, this G2E is all about the games, in every size, shape and form. The manufacturer will present upwards of 214 unique game titles in an expanded booth that will showcase more than 300 total games. It is the most games ever displayed by Bally at G2E, and according to Savage, the display represents the manufacturer’s versatility as the Alpha platform matures and Alpha 2 is perfected.

Savage says this year’s mind-boggling display is only the beginning. “Our five-year strategic plan centers around being more customer-centric,” he says. “We’re going to do much more customer research-we’ll probably increase this tenfold.”

Bally, despite the recession, has seen its profit this year rise 20 percent, and its stock price rise more than threefold. If those numbers are an indication of anything, it’s that the company is already getting it right on what the players want.