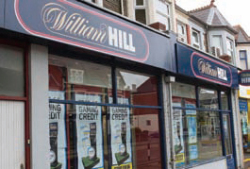 U.K. bookmaking giant William Hill says it will close more than 100 British betting shops this year in the wake of a tax increase on the industry’s electronic table games and other restrictions aimed at curbing the spread of the controversial devices.

The Conservative-led government angered the betting industry by announcing an increase in the tax on e-table revenue to 25 percent from 20 percent in its budget in March, a move that will cost bookmakers around £75 million (US$126 million) a year.

New rules being brought in by the government will also boost the powers of municipal councils by extending to them the same power to control the number of bookmaking licenses as they have over the number of bars, off licences or takeaways in a given area.

Critics of the machines, which offer automated versions of games such as roulette and have emerged over the last decade as the main source of betting shop revenues, say they are addictive and complain there are too many betting shops in British town centers. The industry contends there is no evidence to support the claims of social ills.

Bookmakers face increased tax bills on two fronts over the coming year, with the government also closing a loophole that has allowed them to base online operations offshore.