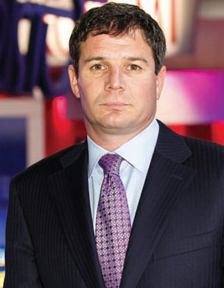 Geoff Freeman was appointed president and CEO of the American Gaming Association in 2013, succeeding the founding CEO Frank Fahrenkopf. Freeman immediately began transforming the AGA into an aggressive proponent of the gaming industry, changing the strategy of playing defense. Today, the AGA presents a positive image of the gaming industry to the world, and has taken the lead in the effort to legalize sports betting in the U.S. He spoke with GGB Publisher Roger Gros in Las Vegas in October.

GGB: When you joined the AGA it was somewhat disjointed. Do you believe the industry is more unified today?

Freeman: Here’s what stands out to me, and I think it’s typical of anyone coming into a new role. Whatever you thought you knew in year one or year two, you didn’t have a clue. You learn something new every year. I do finally feel like I’m beginning to get my arms around this industry, and some of the great opportunities we have in front of us. You mentioned unification; that has certainly been a major priority of the AGA. I think that for any industry organization to be effective, the prerequisite to that is a certain degree of unity among the membership. I think this industry has a lot of experience in fighting battles at the local level, the state level, and various countries around the world, where a market’s open. Obviously, unity is not necessary for fighting for a license. But unity usually is necessary for opening up a market. Unity usually is necessary for defending yourself against attacks. Unity usually is necessary if you want to advance some good ideas. And that’s why we’ve placed such a premium on unity, at this point in time. And I think it’s paying off. We now represent more than 90 percent of all commercial gaming revenue and more than 95 percent of all the supplier gaming revenue, and at this point, we represent more than a third of all tribal gaming revenue. We do that because with that unity comes power.

Sports betting has been your major initiative over the last year. Where do we stand now?

Sports betting has certainly been a high priority for us; it’s a big opportunity for us. We’re the American Gaming Association; we’re not the Sports Betting Association, but we can walk and chew gum at the same time. This is an opportunity to grow the market by billions of dollars. And we are very much focused on that with a two-track strategy: one through Congress, and one through the court.

We see three potential outcomes. Two of those are good, varying degrees of good. I think the least-likely outcome at this point is that the Supreme Court simply concurs with the lower courts and tells them they’ve done a great job. That’s not what the Supreme Court’s in the business of doing. It’s possible, but I think it’s the least likely.

The two more likely outcomes are, one, simply declaring the Professional and Amateur Sports Protection Act unconstitutional, which would instantaneously turn this thing over to the states, to regulate sports betting the same way they choose or choose not to regulate other forms of casino-style gaming.

Or, two, more of a nuanced position that sides with New Jersey’s workaround, and throws the ball back into Congress’ court, to address this issue once and for all. If we had to lean one way, I think we see that as probably a more likely outcome, which, again, this industry is well positioned to address, because of the great work we’ve been doing as an industry over the past several years.

A contentious issue when you first came on was online gaming. Just recently, we saw Pennsylvania approve online gaming, becoming the fourth state in the nation to do that. What is the AGA’s position today on iGaming?

Two things I’ll say about the issue of online gaming—and, as you said, it was a big issue when I joined in 2013 and the AGA did have a public position of supporting a federal poker-only solution. That was a flawed position. It was a flawed position then, it’s a flawed position now, and the AGA, given the lack of consensus in the industry, has taken more of a neutral position. So, two things I’d say about it. One, I wish I could put that genie back in the bottle. I wish we could do that process over again, because I think that the sports betting experience is informative as to what can happen when you’re patient, when you keep your discussions internal, and do the due diligence necessary to determine if you have common cause. I am of the belief that with the right information, with the right process, there is greater common cause in the industry on online gaming, but we didn’t go through that process, at the time.