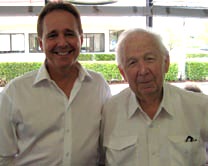 The industry lost one of its modern-day pioneers last month when Mickey Wichinsky, former Sands partner, Bally salesman and inventor, died at 90.

In 1975, Wichinsky left Bally to found supplier Games of Nevada, which scored success with Wichinsky’s “Flip It,” the machine with mechanical pushers forcing mountains of quarters into a tray that was ubiquitous in Nevada casinos in the ’70s and ’80s.

Wichinsky remained a major designer of gaming machines throughout his career. He sold Games of Nevada to Cantor Gaming in 2010, and was awarded the Nevada Gaming Commission’s Lifetime Achievement Award for 50 years of service to the Nevada industry.