Results positive, but much work lies ahead, says latest 'State of the States' report from the American Gaming Association 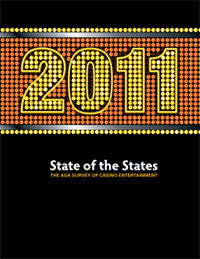 All evidence points to a recovery-in-progress for gaming, although much work remains to be done.

According to American Gaming Association President and CEO Frank J. Fahrenkopf, Jr., this AGA position is backed up by this year’s State of the States report, officially released last month. The 11th annual snapshot of the state of the U.S. gaming industry shows that business has remained stable despite the worst economic slump since the Great Depression, and has begun to bounce back.

“There’s no question; the last several years have been challenging for the commercial casino industry,” Fahrenkopf said during a conference call with media. “This year’s State of the States report confirms that there’s good reason to be optimistic about the future of gaming. The industry has made tough choices and implemented new strategies to persevere. As a result, casinos across 22 states continue to make significant contributions to the U.S. economy.”

Fahrenkopf stressed the “double whammy” suffered by the industry because of the recession—consumer confidence, and thus spending, plummeted; and available capital disappeared, leaving construction projects stranded in mid-stream.

The survey shows that since the revenue high reached in 2007 and two years of declines, the industry may be starting to rebound. For 2010, gross gaming revenues for the 22 commercial casino states totaled $34.6 billion, an increase over 2009 of 0.9 percent. Tax revenues to states and host gaming communities totaled $7.59 billion, and the industry employed more than 340,000 and delivered $13.3 billion in wages.

Fahrenkopf characterized the modest rise in revenue, and the relative stability of the industry during the recession, as a victory. “Gaming companies are stable businesses,” he said, “playing a key role in the broader economic landscape of both the national economy and their host communities. There are few sectors of the U.S. economy that require such considerable capital expenditures, are as labor-intensive, generate as significant a number of U.S.-based jobs and are supportive of thousands of outside vendors and suppliers as the commercial casino industry.”

While praising the stability, Fahrenkopf noted that the results reflect an industry that is “far from monolithic”—revenues were down 9.7 percent in Nevada, 8.5 percent in Atlantic City, and experienced the largest drops in Colorado and Illinois—12.3 percent and 20.9 percent, respectively. At the same time, thanks to new properties opening and the addition of table games, Pennsylvania revenues jumped by 48.3 percent over 2009.

In the manufacturing sector, results were basically static year-over-year—$12.7 billion in direct revenues, with another $9.7 billion in indirect earnings from ancillary businesses—which was seen as a victory considering the economy, according to Marcus Prater, executive director of the Association of Gaming Equipment Manufacturers. Prater, who presented the manufacturing sector results on the conference call, stressed that what sets the gaming industry apart from other businesses during the recession has been research and development.

“Last year’s G2E show was an indication that our sector remains a top technology sector,” Prater said, noting that the variety and quality of new products from the manufacturers has kept demand up for new games. “Despite the rough climate, WMS and Bally reported record revenues,” he said. “That shows quality machines are still in demand.”

Fahrenkopf also noted significant improvements to this year’s State of the States, notably the combination of revenues from traditional casinos and racetrack casinos. “Combining the figures provides a clear picture of the true impact of the national industry,” he said.

He also highlighted a new section of the report that features a comprehensive survey completed by AGA Communications VP Andrew Smith showing the demographics of the modern casino customer. According to Fahrenkopf, the survey shows casino patrons in general mirror the general population in gender, income and education. It also showed that casino customers do more than just gamble, and patronize local businesses—contrary to a popular anti-gaming argument that casinos cannibalize local restaurants and other businesses.

The survey showed that nearly three-quarters of casino visitors last year ate at fine-dining restaurants, 56 percent saw a show, and almost three of five—59 percent—visited retail outlets, restaurants and other attractions away from the casinos when they visited a casino. It also showed a full 16 percent of casino visitors did not even gamble during their trips.

• Slot machines were the favorite game of 51 percent of casino visitors.

• Among table games, blackjack was the favorite, with 19 percent of total casino visitors listing it as their favorite game.

• Some 67 percent of players use their players club card while gambling.

In all, Fahrenkopf said the State of the States results show an industry poised for a comeback, but characterized the outlook as cautious optimism. He said the future will depend on the overall economy.

“As consumer discretionary spending goes, so goes our industry,” Fahrenkopf said. “So we’re not out of the woods yet, but this modest increase coming out of two years of decline is significant.”