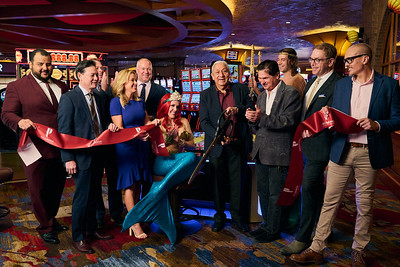 In early February, guests at Pechanga Resort Casino became the first in the United States to experience Ocean Phoenix, a new game from Gaming Arts.

Officials from Pechanga, Gaming Arts and the game’s creators, Jumbo Technology Co., Ltd., celebrated the release on February 4 inside the resort in Temecula, California.

A 7.5-foot gaming console features spaces for six players. During game play, all players participate in the same game and can see the 66-inch screen in the center of the gaming area. Each player works independently to capture the game’s “Four Beasts”—the Mighty Phoenix, the Elegant Mermaid, the Ancient Crocodile and the Flawless Octopus.

Each person playing can see what the others are doing within the game, including their current credit count. The premise is to fire upon the invading creatures, including the Fantastic Beasts, and capture them. Each shot taken counts for game credits. When a player has killed the target, he or she receives credits. Guests can also earn additional weaponry within the game that aids them in capturing their targets.

A promotional launch continued through March 13. More than 200 guests who played Ocean Phoenix during the period were qualified to win up to $1,000 in EasyPlay.