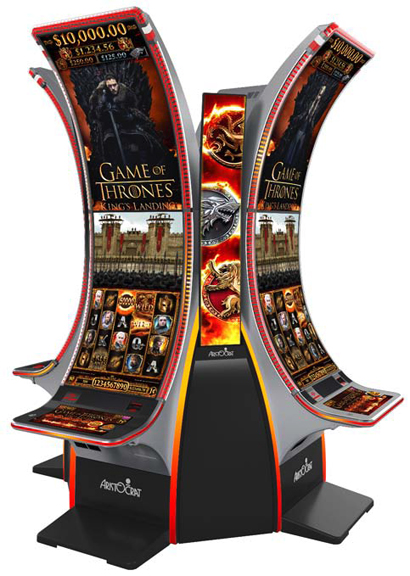 This premium game on Aristocrat’s enormous new Neptune Dual cabinet highlights the eighth and final season of the epic Game of Thrones TV fantasy series. It follows the theme of King’s Landing, the capital and largest city of the series’ Seven Kingdoms. Icons and bonus events recall the Drogon beast and the Red Keep, the seat of the story’s king.

The base game is a 40-line video slot on a four-by-five reel array. In a mystery feature dubbed Drogon High Fire Reels, the Drogon randomly appears and expands the reels to a random height of seven to 14 rows, with wild symbols added to two or more reels.

Three Free Game icons in the base game trigger five free spins. Additional free spins are awarded with “Collect+1” symbols in the free games. They are guaranteed to be “Drogon Spins,” in which the reels are expanded on the imposing twin 49-inch monitors of the Neptune Dual cabinet.

Within the Red Keep Bonus, the player can trigger the Red Keep Jackpots feature, in which rows of spaces appear under each of the four progressive jackpot meters. As the bonus progresses, jackpot icons can fill the spaces under any of the jackpots—the player can win all four if the feature lasts. The top Grand jackpot reset at $10,000.