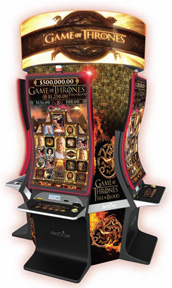 This latest video slot in Aristocrat’s group of games based on the hit HBO show Game of Thrones concentrates on the fourth, fifth and six seasons of the program, introducing new characters and a multi-site progressive to the mix.

The base game is on Aristocrat’s new flame55 cabinet, which features a 55-inch vertical monitor curved in two places, forming the shape of an “S,” with the bottom and top areas of the monitor tilted toward the player. The base game is a “Reel Power” ways-to-win format that gives a nod to the three seasons on which the game is based—the outer reels each have four symbols, the second and fourth reels each have five symbols, and the middle row has six symbols.

In this configuration, the base game offers 5,400 possible ways to win on each spin.

The base game offers three different Dragon bonuses and a main game bonus. All dragons appearing on the reels guarantee a win, and each time a dragon passes over the reels, a player may be awarded extra wilds, reel growth with high-paying symbols, or wild multipliers.

A 100-credit wager activates the Fire & Blood mode, where players can find added entertainment, such as more frequently triggered Dragon features and added 3X Wild symbols in the Forge of Honor feature.

The Forge of Honor feature offers a new “realigning symbols” mechanic with an innovative reel and pay structure. At the end of a bonus spin, the reel symbols realign after they land to create the biggest win possible.