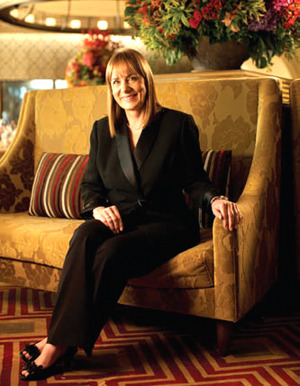 It’s a long way from Connecticut to China, but in changing times, the road to success is clearly marked in both jurisdictions. And the road signs say, “Diversify.”

In Macau, Murphy is charting a similar course. It’s all in keeping with Galaxy Entertainment’s stated vision: to be Asia’s “leading gaming and entertainment corporation.”

For Murphy, the accent is on entertainment.

“Galaxy is the first property of its kind with true resort features, including game-changing amenities and services,” she says. They include a 52,000-square-meter Grand Resort Deck with a white-sand beach, the world’s largest skytop wave pool, three five-star Asian hotel brands, and 50-plus F&B outlets.

Guests have responded with enthusiasm. “Our hotels are running at very high occupancy,” Murphy says. “Galaxy Macau has quickly developed a reputation as a foodie destination, which is no accident since we invested so heavily in this aspect of our operations.”

The Banyan Tree Spa, the only such facility in the Pearl River Delta, is often fully booked, “and our offerings for meetings and incentives are unbeatable in the market, which is due largely to the integrated nature of Galaxy Macau,” Murphy says.

In other words, every comfort is close at hand; besides sightseeing, there may be no reason to leave the resort during a stay—and that’s good for the bottom line.

Murphy says her tenure at Foxwoods, as well as three years with Harrah’s in Las Vegas, equipped her to work in the world’s fastest-growing gaming market.

“Foxwoods’ diversity of product offerings, including the addition of the MGM Grand, helped prepare me for the opening of Galaxy Macau—also the richness of its culture and the Mashantucket heritage,” she says.

“Harrah’s provided a sound appreciation and education of the gaming side of the business,” she continues. “Their systems, processes and commitment to service excellence are a solid foundation to draw upon.”

The growth of non-gaming amenities is also important to the Macau government, which is awash in gaming revenues—which soared 40 percent to 50 percent last year—but wants to shore up its tax base by attracting more families and leisure travelers.

Murphy, with more than 28 years of hotel and resort experience on her résumé, foresees an increasingly beneficial partnership of gaming and non-gaming enterprises.

“I spent half my career working with luxury destination resorts before seizing the opportunity to join gaming,” she says. “Gaming will certainly continue to play a large role in the Macanese economy, but we believe non-gaming—particularly the type that Galaxy Macau brings to the market—has a real future as well.”