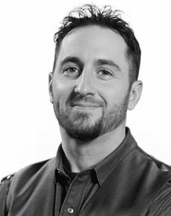 The game developer for International Game Technology Plc., who split time growing up between Boston, Dallas and Reno, found a perfect outlet for his talent.

White’s creativity, merged with relationship skills and mammoth corporate support, has produced a well-oiled game machine for IGT. The three-year company veteran authored initial success stories like Golden Eagle and Oceans of Gold. He puts Elephant King and Wolf Ridge into the mix this year, along with other projects set to premier at Indian Gaming 2017 and G2E.

White brings projects from formation to deployment and then has the joy of watching them being played.

“I love connecting with people through a game,” he indicates. “An interesting part of casino game development unique from other types of game development is that we’re able to observe people interacting with the games we build, because they’re in a regulated environment in a casino. That’s great.”

But no resting upon one’s laurels. White says the best game developers constantly challenge themselves.

“Creativity doesn’t exist in a vacuum—you have to be proactive in searching for things that catch your eye, or evoke a feeling, perhaps like an experience one would get from a film or game, for example,” he says. “Good game developers know that inspiration can be drawn from many places, and they are skilled in applying those observations to their craft.”

IGT caught, and cultivated, a rising star in Reno. Although individually skilled, White enjoys the group success concept of all project efforts moving together.

“I am most proud of the team that worked on these games,” he says. “We worked very collaboratively, and one can sense that team camaraderie in the final products. All aspects of those games feel tightly woven together, resulting in the creation of a cohesive and polished gaming experience.

“The team here is particularly close. IGT also offers an amazing amount of support. We’re a global company, and I love that the products we build in Reno, Nevada are played not only in the U.S., but also in Latin America, Australia, Europe, Africa and Asia.”

White got his gaming start at Bob Luciano’s company Sierra Design Group in 1999, working on Washington VLT products and Class II slots, as well as new Class III products. The experience made an indelible mark on him regarding how companies can foster a strong, productive corporate culture.