The Kefauver hearings stopped illegal gambling dead in its tracks 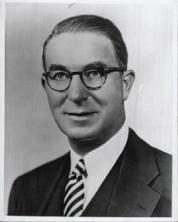 Veterans of the gaming industry will remember the National Gambling Impact Study Commission, conducted by Congress in the late 1990s. The commission was set up to study gambling in the U.S. and its impact on society. The expected result, at least to the politicians who pushed for its establishment, was to crack down on the spread of legal gambling across the country and impose federal taxation.

It never happened, and that’s partially a result of what gaming had learned from an earlier commission that had a much wider target: organized crime.

Estes Kefauver was a soft-spoken, bespectacled senator from Tennessee. Two years into his first term, he introduced a resolution to set up a committee that would investigate labor racketeering in interstate commerce. Newspapers were full of stories in those days linking organized crime with government.

Of course, gambling in those days was only legal in Nevada, where Reno was king and Las Vegas was just beginning to make its mark. But Nevada was just a blip on Kefauver’s radar. He was more interested in stopping illegal gambling in the major cities and surrounding communities.

Normally, these investigations would have been a witch hunt that would have petered out after a year or less. But Kefauver was using a new communications media: television. For the first time, Americans could see the inner workings of government from their living rooms or their neighborhood bars (the sessions were even broadcast to movie theaters as they became more popular).

Colorful (at least in black and white) gangsters were paraded across the screens, many of them either arguing with the committee or refusing to say a word. The dastardly deeds of these criminals were visible, more than the pulp “true crime” publications that had been popular in the ’20s and ’30s.

Preceding the hearings, government investigators would swoop into the alleged gambling towns, terrorizing government officials and gambling businesses alike. The threat of having their faces on the television produced some profound changes in the illegal industry back then.

Towns like Steubenville, Ohio; Covington and Newport, Kentucky; Biloxi, Mississippi; Atlantic City and Union City, New Jersey; Galveston, Texas; Hot Springs, Arkansas; and major cities like Miami, New Orleans and San Francisco all felt the wrath of the federal government for the first time over illegal gambling. Police and elected officials who had cooperated with the speakeasies and backroom casinos were suddenly and effectively eliminated as partners—and turned into adversaries.

Las Vegas, ironically, got off easy. A committee stopover in the desert was interrupted only two hours in so the members could tour the Hoover Dam in Boulder City. Most of the city’s notorious mobsters/casino operators, like Mo Dalitz, were conveniently absent during the visit.

But it wasn’t the last connection to Las Vegas. In March 1951, the committee rolled into New York at the height of its popularity. Five of seven New York television stations were broadcasting the hearing live. Head mobster Frank Costello provided dramatic testimony, but in what was probably the birth of reality television, the girlfriend of Las Vegas casino owner Benjamin “Bugsy” Siegel faced the cameras.

Virginia Hill regaled the committee with tales of the “fellas” she had known, the gifts she had received and the incidents she had witnessed. It was mesmerizing, but the interest began to wind down soon after.

An 11,000-page report and its recommendations were largely ignored. Kefauver lost his second bid for the presidency in 1956; his work was mostly forgotten—except in those cities where illegal gambling had been exposed. Those operations were effectively ended, and it led to the spread of legalized gambling across the country, starting with Atlantic City in 1976.

So, what was once a threat to gaming actually became its champion, as it brought the industry from out of the shadows and into the light. The NGISC hearings in the ’90s were far less dramatic and focused on facts, not fantastic stories. Legal gaming was proven to be an asset to America.

All lessons learned from the quiet Tennessee senator.