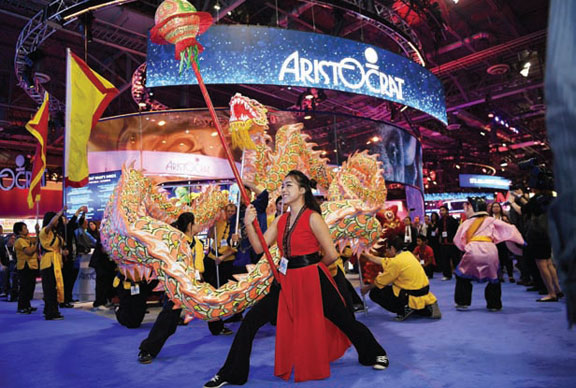 This year’s Global Gaming Expo was different from previous years in several aspects. First, it was a year since the tragic shooting at Mandalay Bay, which occurred the night before the 2017 show was scheduled to open. Then-American Gaming Association President and CEO Geoff Freeman determined the show must go on, and it turned out to be a cathartic experience for the industry to be together and to mourn together.

G2E 2018 was markedly different. Newly legalized sports betting in the U.S. has spawned a wealth of technology solutions available to make it easy for U.S. casinos, racetracks and other venues to offer sports book products. They were all on display at G2E.

The general health of the industry was also a factor. Although gaming stock prices have begun to slide in recent months, revenues have remained strong and competition has heated up. Every casino is looking for the “next big thing” and suppliers were more than eager to promote their latest product to fulfill that desire.

However, as usual, the focus at G2E was on the typically remarkable lineup of new slot games, and groundbreaking new hardware on which the major manufacturers are presenting them. All of the major slot-makers launched new hardware at G2E, from upright cabinets to jumbo machines to bar-top presentations that include slot games as well as the standard video poker offerings.

Among the highlights for the top slot-makers: IGT launched a new series of games based on The Price Is Right, the legendary game show now hosted by Drew Carey. (Carey himself appeared at the IGT booth to promote the game, at left.) The series is offered in three new versions, divided by denomination. A high-denomination version on the Megatower Universal cabinet is The Price Is Right Showcase Showdown. The game uses the 55-inch monitor on the large cabinet for a giant version of the wheel used in the Showdown on the game show, with credits instead of prices.

New takes on wheel bonuses were also evident at the Scientific Games booth with Ultimate Cash Spin, featuring a new twist on the “U-Spin” mechanic—instead of the player touching the screen to spin a video wheel, the game features a mechanical wheel that the player can grab and physically spin, using elbow grease to send it spinning as fast as desired.

The more intriguing technological offering from Scientific Games, however, was found in the newest game in the James Bond series, Die Another Day. The game is housed on a huge new version of the TwinStar cabinet series, a 1,600-pound behemoth called the TwinStar Phantom. When the main bonus is triggered, the monitor rises to reveal a secret 3D chamber utilizing the first gaming application of the Pepper’s ghost 3D technique. At the back of the chamber is a reel set, and a spaceship to the side shoots beams at the reels to transform symbols into wild symbols.

Aristocrat put on a mind-boggling display of new games utilizing its latest hardware, such as the flame55, with a 55-inch monitor that curves in two places. Aristocrat used the new form factor to launch Buffalo Diamond, celebrating the 10th anniversary (yes, the Diamond Anniversary) of the industry-topping Buffalo video slot brand. The large 4K-resolution monitor is used to great effect to display video of stampeding buffalo to accompany some game events, and there is Old West-style music that plays during reel-spinning, complete with a karaoke-style lyric stream so you can sing along.

Konami Gaming rolled out games designed for its super-sized new Concerto Opus cabinet. Dragon’s Law uses the imposing 65-inch flat-screen monitor on the Opus for colorful graphics depicting a dragon that flies from the top to the bottom reel array to award wild symbols and multipliers, and Treasure Ball uses the screen for an entertaining bonus in which gold and diamond balls are ejected from a gumball-machine-style apparatus on the top screen to the reels to award credits or progressives.

Everi displayed its largest and most diverse group of games yet, headed by Shark Week, a six-pod group of games presented as a themed package, the 55-inch monitors arranged touching each other to form a top display that looks like a giant aquarium. Bonus events all draw on the popular Discovery Channel series of the same name, with an array of clever themed bonuses.

AGS featured an array of games on its new Orion Upright core cabinet, including many games ported over from its legacy ICON core format, as well a new games for its Orion Portrait premium cabinet headed by the new Diamond Streak series. It also featured a new offering for the company, the 10-player Royal Derby mechanical horse-racing game from Slovenia’s Alfastreet.

Aruze featured games with entertaining new technology, including a reboot of Paradise Fishing, with its community fishing bonus game. On the new Muso Limited cabinet, the game is placed in banks with 55-inch top monitors side by side, utilized for a bank-wide fishing bonus. As with the original, each machine is equipped with a fishing-rod joystick, and players “fish” in a pond that extends across a giant display formed by the adjacent monitors. The player feels tension while turning the reel, particularly on the bigger fish—reeled in for bigger bonuses.

Ainsworth Game Technology launched the second game carrying the theme of the classic arcade game Pac-Man. Pac-Man Link carries all the iconic images of the legendary arcade game with four base games named for the ghosts in the original game—Blinky, Pinky, Inky and Clyde. The progressive game is featured on Ainsworth’s new dual-screen EVO cabinet.

Novomatic Americas featured its new MacGyver game, based on the 1980s TV series. Housed on the new Novostar V.I.P. 3.50 cabinet with Python Chair or the V.I.P. Lounge 2.32 cabinet, the immersive slot delivers all the quirks of Angus “Mac” MacGyver, the show’s main character, who solved desperate government problems but always came equipped with stuff like a Swiss army knife, duct tape, chewing gum and paper clips to help him. Those items are all featured as reel symbols or bonus icons in the game.

Merkur featured an impressive array of new games. Highlights included Western Pacific and Cash Stacks, both using cash as the main theme; and Big Deal Wheel, featuring segments of wheels as symbols. The player tries to complete the images of wheels on adjacent reels to trigger a bonus feature with wins according to which symbols are matched to trigger the bonus.

Finally, the skill-based gaming segment was represented by Gamblit, which packed its booth for all three days of the show with attendees viewing a complete lineup of new skill games. Highlights included the multi-player Pac-Man Battle Casino, in which players compete in a community-style version of the classic arcade game on a flat-table surface; and Playboy Pinball, featuring what is perhaps the truest replication of the traditional pinball game to yet hit the slot floor. The G2E conference program was in rare form, with the Monday sessions being mostly standing-room-only. Sports betting was the focus for the entire four-day conference, but other topics were also discussed. Emmy Award-winning broadcaster Sharon Delaney McCloud was a stand-in at the opening keynote for late scratch WNBA Commissioner Lisa Borders. McCloud discussed how women can build their own executive presences in male-dominated industries with three key principles.

Maybe the most anticipated keynote arrived on Thursday with the Innovation Incubator featuring ABC’s Shark Tank stars Daymond John and Kevin O’Leary, along with Sprout CEO Cindy Eckert. The panel evaluated four new gaming products before awarding the $10,000 prize to DoorPro Doorstop Founder Bill Hengler, who invented a doorstop for hotel room doors. He demonstrated the product and boasted of 200,000 sales to major clients.