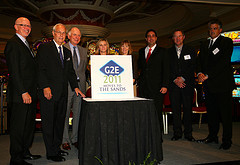 The organizers of Global Gaming Expo, the industry’s largest trade show and conference, announced late last month that the show will be moving locations and dates. The American Gaming Association and Reed Exhibitions say the moves were made to accommodate requests from a majority of its exhibitors.

“G2E is the only international event developed by the industry, for the industry,” said Frank J. Fahrenkopf Jr., president and CEO of the AGA. “These changes, which were made with the needs of both exhibitors and attendees in mind, are concrete proof of our commitment to that creed. We expect the revised schedule to result in increased attendance and sales at all of our events.”

The show has traditionally been held in mid-November at the Las Vegas Convention Center. Because earlier dates weren’t available at the public facility, Courtney Muller, senior vice president at Reed Exhibitions, said changes were necessary.

“Developing shows that address the needs of our participants always has been our top priority, and their feedback was the key driver of these changes,” said Muller. “We have had a tremendous run at the Las Vegas Convention Center and thank the team there for their tireless efforts on behalf of the industry. We look forward to this next chapter with great anticipation for continued success in G2E’s next decade.”

Michael Leven, president and COO of Las Vegas Sands Corp., says the company is proud to host the show at the Sands Expo Center, which is adjacent to its Venetian and Palazzo casino resorts.

“As a Las Vegas-based casino operator, I know well how crucial G2E’s flagship show is to both the gaming industry and to this city,” said Leven. “The Sands Expo and Convention Center is honored to host such an important annual event, and we are eager to do our part to help it grow in the coming years.”

In a continuing effort to more evenly spread out the calendar of industry-supported trade shows, the G2E organizers announced other changes. G2E Asia, which had been held at the beginning of June, is switching to a mid-May schedule beginning in 2012. The largest trade show and conference in Asia is also held at a Las Vegas Sands property, Venetian Macao.

The 2010 version of G2E will be held November 16-18 at the Las Vegas Convention Center.

In a related development, the largest Latin American trade show, SAGSE, which had been held in late September, will move to a November timeline in 2011, giving exhibitors the opportunity to display their products in front of the Latin American audience.

The G2E organizers would not address rumors that the group is planning a European trade show and conference to compete with the long-running ICE show currently held in London in late January. But reports out of Europe have said that Reed and the AGA have partnered with Swan Events, owned and operated by Karen Cooke, who once ran the ICE show for owner Clarion.

Sources say a group of European exhibitors has emerged as the driving force behind the potential show and are considering bids from Reed and Clarion. While ICE is locked into London’s Earls Court for the foreseeable future, the Reed show is reportedly being pitched for either London’s ExCel exhibition hall in the Docklands section of the city, or the Rai Centre in Amsterdam.

One of the largest ICE exhibitors, slot manufacturer Novomatic Industries, announced that it is staying with the Clarion show at Earl’s Court. Novomatic, which typically has a stand that dominates the trade show, announced that it will work with Clarion to improve the show, now called ICE—Totally Gaming.

“As recent industry speculation and media comment have made clear, there has been much discussion in recent months about the future organization and the location of Europe’s major gaming industry show,” said Jens Halle, managind director of Novomatic’s Austrian Gaming Industries subsidiary. “Novomatic’s decision to stay at London’s Earls Court and with the present organizer, Clarion Gaming, is driven exclusively by the wishes of our customers and is subject to final contract negotiation.”