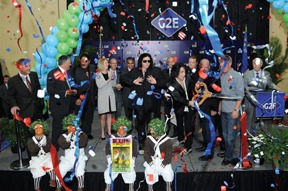 The gaming industry showed signs of a return to economic health as international operators and vendors came together for the 12th annual Global Gaming Expo at the Sands Expo and Convention Center in Las Vegas.

The level of attendance and exhibitions at G2E 2012 brought the conference and trade show’s numbers back to pre-recession levels, according to Judy Patterson, senior vice president and executive director of the American Gaming Association, which stages the event in partnership with Reed Exhibitions. “Our biggest show was in 2008, and we’ve matched that,” Patterson said. “We knew the numbers looked really good coming in, but our final results are going to be exciting. We’ve definitely come out of the woods in terms of the show.”

Patterson estimated that the show’s initial attendance numbers indicate a 3 percent -5 percent increase over G2E 2011, along with a 5 percent jump in exhibition space. An estimated 24,000 attendees viewed products of 430 exhibitors from 28 countries.

The show’s recent success has been helped out by the new venue, the Sands Expo Center, where G2E moved last year after 10 years at the Las Vegas Convention Center. Patterson said the traffic patterns in the new venue have helped all the exhibitors, and have helped attendees see a wide range of products.

“We were able to reconfigure the show floor, which we would never have been able to do at the convention center,” she said. “We put the large manufacturing exhibitors in the back and in the middle, and around the perimeter, so the smaller exhibitors are more centrally located. That has proved a big plus for them. Everybody’s always going to go to the big guys, no matter where they are, but this has given more exposure to the small and medium-sized exhibitors. It’s been a big positive for us, and one of the big benefits from our move.”

Paul Stanley and Gene Simmons of the rock band KISS participated (WMS has a KISS slot), as well as Rick and Corey Harrison from the History Channel reality show Pawn Stars (featured on a Bally game) and NASCAR driver Clint Bowyer (another Bally slot).

The new show configuration indeed gave a lot of attention to small and medium-sized exhibitors, but the focus, as usual, remained on the major slot manufacturers. In addition to Bally games such as “Pawn Stars”—which features a “Negotiation Bonus” that re-creates the bartering of the Las Vegas pawn shop owners on the show—and NASCAR, featuring five NASCAR drivers (the player selects a driver for the Daytona Speedway bonus), highlights at Bally included “Playboy Prizeball,” featuring a pinball bonus on a giant top box; and “The Beach Boys,” featuring the music and images of the legendary surf band.

WMS Gaming, in addition to the “KISS” slot machine, featured “Monopoly Prime Reel Estate,” one of the first games on a radical new cabinet called “Gamefield,” which uses a large horizontal monitor in front of the player that interacts with another monitor in the top box.

Other highlights on the slot side included two “Superman” games from Aristocrat, one based on the 1970s movies and the other based on the comic book; a new movie-based slot from Aristocrat called “The Mummy;” “Plants vs. Zombies” and “Zuma” from Spielo International, based on the popular social games of the same name; “Rich Life” from Aruze Gaming, one of a new series of slots featuring a competitive bonus round on a large screen; “Hawaiian Legend,” the first game in Konami’s new “Dynamic 5” cabinet; new knowledge-based games from American Gaming Systems including “Ripley’s Believe It Or Not!,” a new game drawn from the internet by AC Slots in “Slingo Crazy Jokers;” and “Peter & Wendy,” a game from Cadillac Jack based on the Peter Pan play.

Other notable events on the trade show floor:

• Multimedia Games set up its “TournEvent” tournament system on the show floor, and held the finals for the Washington statewide “TournEvent of Champions” inter-casino slot tournament in a sports bar at the Venetian casino. Multimedia also displayed a lineup of new games, including standouts like “Moneyball,” with a pachinko-style bonus; and “Starry Nights,” a retro space theme that recalls early motion pictures.

• SHFL Entertainment (formerly Shuffle Master—see Goods & Services for news on the name change) featured the first U.S. display of its series of slot machines currently in the Australian and Asian markets. Among the standouts was a series of slots based on The Flintstones, the popular 1960s cartoon series.

Meeting of the Minds

The G2E conference program always brings cutting-edge information to the gaming industry, and this year was no different. Starting with the iGaming Congress on October 4 and concluding with the innovative Insights on Operations on the final day, attendees were able to get a full education during the four days of the conference program.

In recent years, iGaming has been a big element of the G2E program. The development of the industry, just getting started in the U.S., is still in question with several states already having legalized it or in the process of doing so. Most experts expect the issue to arise during the lame-duck session of Congress that will convene after the election. Although the AGA’s Fahrenkopf refused to speculate on what might happen at that point, he said, “The AGA supports states having the right to license and regulate online poker, but not without federal minimum standards that address consumer protection, prevent underage gambling and promote responsible gaming.”

Others believe that online poker could play a role in addressing the difficult fiscal issues facing the U.S. And with a draft of the highlights of a potential bill backed by Democratic Majority Leader Harry Reid and Republican Senator Jon Kyl being circulated recently, there may be a consensus on a bill, at least in the Senate. But prospects for passage in the House look dim, so the most likely outcome in the short term is state-by-state legalization, said most observers.

Only one of the problems with a state-by-state model is the issue of liquidity, particularly for the first state to legalize online poker, Nevada. At the opening session of the iGaming Congress, Fahrenkopf asked Mark Lipparelli, who has just resigned as the chairman of the Nevada Gaming Control Board, about the small pool of poker players in the state.

“Obviously, the state will be looking for interstate compacts to broaden the base of players,” he said. “But how that will happen is still to be determined.”

Fahrenkopf pointed out that the U.S. Constitution says any interstate compact must be approved by Congress, a clause that is routinely ignored when it comes to things like electric grids and certain forms of commerce. But Fahrenkopf believes a controversial issue like online gaming might cause Congress to get involved in any such agreements.

Next year’s G2E will move to September 22-24 to avoid a conflict with the Jewish holidays.