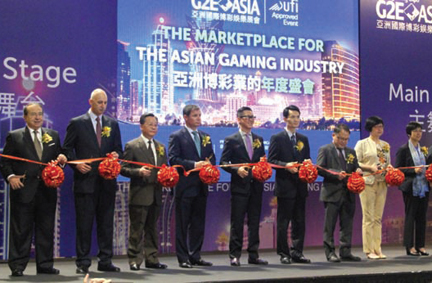 This year was no different. Francis Lui, the vice chairman of Galaxy Entertainment, was first up to discuss the state of the gaming industry in Macau. Addressing almost 500 attendees at G2E, Lui made a case for creating events in Macau that will make it a regional destination for non-gaming activities. But in a dramatic graph, he said Macau has only 33,000 hotel rooms, compared to 78,000 in nearby Hong King and 155,000 in Las Vegas. He said more hotels will support major events and conventions, diversifying the Macau economy.

He also pointed out that analysts who were fearful of more effective regulations on the Macau gaming industry were missing the point. He says anyone operating in Macau should welcome this higher level of regulation.

“If you don’t really embrace the change, you shouldn’t be in Macau,” he said. “It is very clear what the Chinese central government wants and the Macau government wants is to have more regulation, more transparency in the industry.”

At a later panel, Sands China President and COO Wilfred Wong said he doesn’t think the planned introduction of new customer verification technology at automated teller machines in Macau will have a negative impact on his firm’s casino business.

“We have always supported the government initiative to improve the city’s business environment,” Wong said at G2E Asia. “This initiative helps prevent some illicit ways used by some people to obtain cash via the use of several credit cards and lend it to others; this is something that we also don’t like to see.”

Lui also made a plea for lower taxes in Macau, pointing out that many new jurisdictions have a lower rate than Macau’s 39 percent.

“There needs to be an open discussion of how Macau can ensure its long-term competitiveness,” he said.

Following Lui was Paulo Martins Chan, the director of Macau’s Gaming Inspection and Coordination Bureau (DICJ). Chan discussed the current licensing regime for junket operators, which has been significantly tightened since he took office a little more than a year ago.

“We are approving licenses on a case-by-case basis,” he told reporters following his keynote address. “Of course, we want to keep junkets that are financially healthy and capable.”

As for a decrease in taxes, Chan wouldn’t rule it out.

“As of now we don’t have any plan to revise the taxation regime, but of course everything will have to be considered,” he said. “At this stage we are trying to collect more opinions from different sectors so that in the future we can make a better decision.”

In another keynote panel, operators Wong and John Shigley, chief operating officer, gaming, MGM China Holdings, were joined by Derik Mooberry, group chief executive of gaming, Scientific Games; Mitchell Bowen, managing director, Australia, New Zealand and international, Aristocrat Technologies; and Walter Bugno, chief executive officer, IGT International. Moderated by GGB Publisher Roger Gros, sports betting was a topic at the session. While sports betting in Macau is a monopoly held by Macau Slots, Wong was hopeful that the casinos could work with this company to introduce it in the properties.

“What we may do is to try to see how we can cooperate with this operator, because we agree that sports betting is prevalent everywhere and we would like to be able to provide this offering to our customers,” he said.

Shigley agreed that it would benefit the casinos.

“It’s going on, it’s happening. Even in Nevada where it’s legal, the amount of legal betting is dwarfed by the amount that’s off the books,” he said.

“There’s a wide desire to bet on sports in Asia, and it’s already huge business. We would love to have a piece of it and pay whatever tax rate is most relevant to develop reinvestment and pay the best salary for our employees.”

As for the trade show at G2E Asia, it set a record for square meters, completely occupying the ground floor of the Expo Center at the Venetian. Growth was strong in the iGaming segment, as well as the lottery since the Asian Lottery Forum was co-located with G2E this year. A record number of delegates attended G2E Asia, as well.