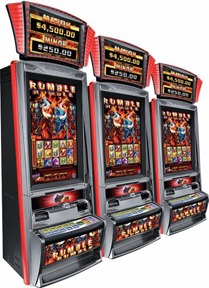 When Ainsworth Game Technology arrives at G2E this month, it will come armed with plenty of new product, but its motto and message will remain the same: “A Winning Play.”

The Australian company, now expanding its presence throughout North and South America, will showcase an extensive library of new games compatible with the A560 SL cabinet, first previewed at last year’s show. According to the company, this variation of Ainsworth’s flagship is a “one-screen wonder, specially designed and custom-built for a unique, highly entertaining game range.”

The cabinet utilizes the same operating system as all A560 cabinets, with a 32-inch vertical high-definition display, improved graphics and surround-sound, and an optional 19-inch LCD topper option for jackpot promotion.

The family of games includes the standout performer “Rumble, Rumble,” along with “Whopper Reels,” “Bonus Bonanza,” “Rampaging Rhino,” “Frontier,” “5 Star Jackpots,” “Order of the Dragons,” “Fire Wizard” and “Ice Wizard,” among many others due for release in the coming year.

“This year’s G2E lineup is a combination of licensed brands, innovative game mechanics and hardware and exceptional math models that will definitely provide the best player experiences and create the biggest excitement on any gaming floor,” says Scott Clarebrough, Ainsworth’s group general manager of strategy and development. “We’ve pushed the boundaries of technology with our latest platform to ensure improved sound, graphics and a range of branded games like you’ve never seen before.”

Following the success of “The Magnificent 7,” based on the 1960 spaghetti Western and introduced to great acclaim last year, Ainsworth will debut two new branded products,?and they couldn’t be more different. “Showgirls” is based on the 1994 cult movie with Elizabeth Berkley. “The Sound of Music,” of course, is based on the 1965 musical with Julie Andrews.

With its Vegas-party theme, Showgirls, in particular, lends itself to the casino environment; The Sound of Music will offer timeless images and music from the nostalgic favorite. But along with the iconic brands, Ainsworth also promises strong math and game-play aspects.

“We’re true to our roots?from our experience; we know what keeps people coming back is the game play and the players’ ability to win and win big,” says Mike Dreitzer, Ainsworth’s president of North American operations. “And from that standpoint, we are very excited about these branded products and believe they will fare extremely well in the marketplace.”

Not surprisingly given the success of the top-performing licensed slot The Magnificent 7, Ainsworth will also debut “The Magnificent 7 Reloaded,” a sequel with abundant eye-catching new features. It’s designed to take full advantage of the company’s super-sized A560 Wideboy, with a 32-inch landscape-mode LCD top box and dazzling LED lighting.

Also to be released on the super-sized Wideboy is “Reels of Wheels Horsepower,” which incorporates the “Mustang Money” feature game with the unique multi-wheel “Reels of Wheels” concept as well as free games. “We’re taking a very popular title with well-liked features, and in one super-charged game we’re packing it into our premium cabinet,” says Dreitzer.

Jason Meyer, senior lead game designer and producer of alternate slot games at Ainsworth, says the games are designed to appeal to players at every level, in every age group, across the demographic spectrum. “We build games for true gamblers, people who never get tired of winning big jackpots,” Meyer says. “One thing we’ve been doing going forward is making our games more digitally entertaining, but we keep that same math model in there, with strong volatility to keep players coming back.”

In the jackpot products segment, Ainsworth will be showcasing a range of new Asian-themed link progressives that include “Lucky Treasure,” “Treasure Storm” and “Oriental Fortune.” Illuminated in the Super A560 cabinet, Treasure Storm is packed with three levels of progressives, two stand-alone progressives, and unique free-game features. With superior maths models to choose from—“888 Blue Dragon,” “888 Red Dragon” and “888 Yellow Dragon”—Treasure Storm promises to be a player favorite.

The company, headquartered in New South Wales, is making significant inroads in the U.S. market—specifically in Mississippi, where it was licensed as a manufacturer in January; Missouri, where it won clearance to serve as a supplier in April; and Arizona and Montana, where it is now offering its product for sale. Ainsworth also is looking to aggressively expand its install base in Oklahoma.

“There is really a lot of blue-sky opportunity for us,” observes Dreitzer. “There won’t be a whole lot of new casino openings over the next 12 to 24 months. But there are collectively over 115,000 units within those states alone, so there’s plenty of room for us to expand, and that’s what we’re focused on.

“There has been an increased emphasis on analytics, maximizing revenues across all the units on the floor. That’s where we come in and say, ‘We have a product that could perform better on your floor than some of your existing product.’”

In anticipation of increased market share, the company will shortly break ground on a new U.S. base on over 23 acres in Las Vegas. This facility will open in 2016. Though Ainsworth now comprises less than 1 percent of the North American market, with a great product lineup and an enhanced and motivated sales force, Dreitzer is confident the company will continue to make headway and increase its footprint across North America.

Latin America is also a big market for the company, and Ainsworth is doubling down its efforts to penetrate the market there. As always, and wherever the company operates, it comes back to the games.

“At the end of the day, there’s something quite timeless and classic about a good gamble and offering great value to the player,” says Dreitzer. “We offer the player a good gamble that brings them back again and again.”

Clarebrough calls this year’s G2E showcase “our strongest, most diverse product portfolio to date… Ainsworth has been building for the future, and now we’re ready to further raise the performance bar with more leading-edge brands and exceptional game titles. We are committed to delivering players quality unique entertainment experiences.”