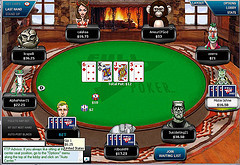 A series of closed-door meetings held in London in September ended with the Alderney Gaming Commission revoking the license of Full Tilt Poker. The commission, which suspended Full Tilt’s principal license in July, said the company misled it and lied about its financial operations.

The company defended its actions, and said the revocation will make it more difficult to find investors and to repay players, but said it remained committed to doing so.

The day after the license revocation, a French businessman emerged as a potential “white knight” to rescue the company from bankruptcy. But his background only made the situation more cloudy.

Bernard Tapie made a bid to buy Full Tilt, but only if the company is able to come to a “favorable resolution” with the U.S. Department of Justice on the recently filed civil suit. Under the agreement, Tapie would repay all Full Tilt customers their deposits and winnings and take over management of the company.

Tapie is a close friend of French President Nicolas Sarkozy and was formerly a socialist minister before changing parties to support Sarkozy. He has become wealthy by buying bankrupt companies and turning them around, including a three-year period in the 1990s when he owned Adidas.

The DOJ had no comment on Tapie’s offer to buy Full Tilt, but a company spokesman said, although it is not a done deal, it was a positive for Full Tilt.

“It’s a significant development and one that definitely gives a renewed sense of optimism that the players will get paid,” said attorney Barry Boss.