Online gaming bill has bipartisan support, but faces a tough go in the Senate 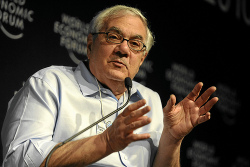 DAVOS/SWITZERLAND, 30JAN10 - Barney Frank, Congressman from Massachusetts (Democrat), 4th District; Chairman, Financial Services Committee, USA, is captured during the session 'The US Legislative Agenda: A Global Perspective' in the Congress Centre of the Annual Meeting 2010 of the World Economic Forum in Davos, Switzerland, January 30, 2010. Copyright by World Economic Forum swiss-image.ch/Photo by Michael Wuertenberg

The United States took a large step forward in efforts to legalize online gaming last month when the House Finance Committee marked up a bill sponsored by its chairman, Rep. Barney Frank (D-Massachusetts), the Internet Gambling Regulation, Consumer Protection and Enforcement Act of 2009. The bill will now move to the House floor for a vote of the full membership and then on to the Senate, where prospects for passage are not as bright.

Frank has been holding hearings on his bill over the past year, with both opponents and proponents testifying. The final shape of the bill changed as amendments were offered, and eventually it passed the committee by a vote of 41-22, with a non-partisan mix of supporters.

The legislation was supported by 69 co-sponsors, along with the U.S. Chamber of Commerce, the Financial Services Roundtable and the National Association of Federal Credit Unions.

Frank said his bill was designed to allow Americans to make their own decisions on gambling.

“My primary goal is Americans ought to be free to do what they wish without this kind of intrusion,” said Frank. “Some adults will spend their money foolishly, but it is not the purpose of the federal government to prevent them legally from doing it.”

The bill was helped by estimates of billions of dollars in tax revenues dedicated to a government eager to find more funding—one study says it will produce $42 billion over the next 10 years. Some say the estimates are overblown, but it appears to have swayed some of the bill’s supporters.

“I have opposed this bill for years, but I am slowly changing,” said Rep. Brad Sherman (D-California). “The best reason for this bill is the prospect for revenue.”

“We will not pass an internet gaming bill,” Sherman said. “We will pass a bill to do something very important, funded by internet gaming. Forty-two billion dollars over 10 years has an effect.”

Some of the elements of the Frank bill:

Other amendments were proposed and accepted to line up votes.

Rep. Gary Peters of Michigan proposed an amendment that would exempt state and tribal lotteries from being licensed by the federal government, since they are already subject to state licensing. In another amendment, people who owe child support would be barred from gambling online, a measure that some states already apply to land-based casinos.

While opponents of the bill, led by Alabama Republican Rep. Spencer Bacchus, tried to defeat it, they were content, in the end, to add some of these amendments that would water down the bill to some extent.

“With this bill, in one broad stroke, we will allow every child in America to gamble on their home computer or in their dorm room,” Bacchus said.

In one of the more controversial amendments, gaming sites that have continued to accept wagers from the U.S. despite the passage of UIGEA would be barred from licensing. This would impact some of the largest poker sites, including Full Tilt Poker and PokerStars.

But opposition will get stronger in the House vote and promises to be even greater in the Senate.

Senator Robert Menendez (D-New Jersey) introduced a bill in the Senate last year that would legalize fewer forms of gambling, including poker. Menendez, however, has fewer supporters in the Senate and even proponents of the bill think it’s too ambitious to get through the upper house of Congress.

In addition, the U.S. Department of Justice and the Internal Revenue Service are on record as opposing this bill.

Nevertheless, the bill seems like a win for the land-based U.S. companies. Although there is hardly unanimity among all the American gaming companies about online gaming, companies like Harrah’s Entertainment and MGM Resorts, which have experience in the online arena, are expected to prosper. Harrah’s already has a Caesars-branded online gaming site that operates out of the U.K., but does not accept wagers from U.S. gamblers.

And despite what seems like a blow because it continues to accept U.S. bets in violation of UIGEA, PokerStars was supportive of the bill.

Currently, the only legal form of online gaming is wagering on parimutuel horse racing. National Thoroughbred Racing Association President and CEO Alex Waldrop said the organization has worked with Frank on his bill to “ensure that any federal legislation that pertains to internet gambling contains adequate protections for online parimutuel wagering on horse racing as authorized by the Interstate Horseracing Act.”