Survival in the Year of French Regulated Gaming 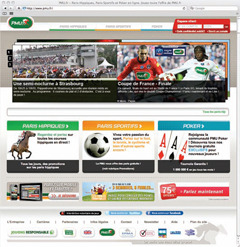 Nearly a year after being legalized in France, the online gambling market lags far behind the operators’ expectations. If the number of accounts opened by players is in line with the estimates, the gross gaming revenue globally is behind the forecast figures.

After a soaring debut, online poker took a step back during the first quarter of 2011. The situation for land-based casinos did not get any better.

In the last three years, the gross gaming revenue for French casinos dropped 20 percent, 2.1 percent in the last fiscal year, from November 2009 through October 2010. Besides the smoking ban and the world economic crisis, gambling houses had to face new competitors from June 2010, with the opening of the online gambling market. However, “new” is not necessarily the most appropriate term to use, since many of them, at least the bigger ones, have only swung over from a “grey” sector to an authorized one.

Has this opening disrupted the overall gambling market? Not really. If new players have emerged, their sustainability is not guaranteed in the medium and long term, while for others, such as former monopolies, online gambling has only strengthened their brands. A thorough analysis of the figures published at the end of the first quarter 2011 by the French Online Gambling Regulatory Authority (ARJEL) is convincing evidence.

At the end of March 2011, the number of accounts of racing bettors was projected at 131,588 after reaching a peak of 152,398 at the end of January. As of  June 2010, when pmu.fr was the only authorized operator, the total amount of weekly bets was €15 million. After going just over €20 million twice, at the beginning of January and the beginning of March 2011, the stakes have stabilized, with bets amounting to €18.6 million.

The accounts of sports bettors experienced a decline in number. After auspicious beginnings due to the football World Cup—319,981 active accounts as of June 2010—this sector has evolved to around 150,000 active accounts from September 2010 to December 2010. At mid-January, ARJEL counted 143,201 active accounts. Since then, the count has been lower and higher. But by the end of March 2011, there were only 73,026 active accounts, nearly half the number noted in mid-January.

This drop is reflected in the amount of bets, since in mid-January the sports bets amounted to €14.7 million and €7.7 million at the end of March. During the first quarter, bets amounting to €147 million were recorded, against €200 million in the fourth quarter 2010. Soccer alone represents 54 percent of total betting, tennis 24 percent, followed by basketball at 8 percent and rugby at 4 percent. Live betting represents 49 percent of bets.

At the end of March, weekly betting was around €145 million. In six months, poker cash games collected nearly four times what casinos collect in one year. Regarding tournaments, their activity increased by 4 percent, going from €261 million in the fourth quarter 2010 to €271 million in the first quarter 2011. But these results are false, because since January, entry fees experienced a slow erosion week after week. At the end of March, the weekly admission fees were below €21 million.

At the beginning of April, PMU published its outcome for 2010. The former racing monopoly is buoyant, with a total amount of stakes of €9.540 billion in 2010, which represents a 2.6 percent increase. The net outcome amounts to €791 million, up 8 percent. Online bets for horse racing have reached €730 million , representing a 9.4 percent increase.

This “potential threat” represented by the opening to competition has thus “transformed itself into a development opportunity,” according to Philippe Germond, CEO of PMU. The horse-racing operator can even afford to self-compete. Genybet.fr, which draws confirmed racing players, is one of its subsidiaries.

Today, www.pmu.fr is the No. 3 French sports betting website, in collaboration with PaddyPower, with 14 percent market share in 2010 and 16 percent at the end of the first quarter 2011.

“We don’t make profit on sports betting,” says Germond. “This is a loss-leader activity which can become profitable, with a small or big balance possible in the third year.”

As for the poker product, achieved in partnership with PartyGaming when that site was still separate from bwin, PMU attracted 10,000 players per day and 8,000 on average. The €155 million in bets collected in 2010 represent 6 percent of market share. Germond wants to achieve more progress.

National lottery operator Française des Jeux (FDJ) has the same attitude. If all it did was to come into the sports betting market, this did not prevent it from thriving globally. FDJ achieved sales worth €10.551 billion in 2010, against €9.997 billion in 2009, representing a 5.5 percent rise. Lottery revenue at €9.409 billion increased by 2.1 percent. Sports betting grew more spectacularly, to €1.142 billion, up 46 percent on the year.

According to Christophe Blanchard-Dignac, CEO of FDJ, the sports betting website ParionsWeb had 3 percent market share before legalization but has now achieved 15 percent. The objective is to reach 25 percent in 2012.

As far as poker is concerned, FDJ went into partnership with the Lucien Barrière Group—which has also obtained exclusivity rights for broadcasting the World Series of Poker in France—within the site Barrierepoker.fr. The figures for this subsidiary have not been disclosed. What is known is that this site is not among the leaders, and the top three operators represent 80 percent of players.

At the beginning of May 2011, looking at 23 of the 25 licensed poker websites, only one has gone out of business. The site 200%Poker.fr has temporarily gone into hibernation, but the prospects for restarting are questionable as it has not acquired any new clients for the last six months. This site is owned by some 40 small, independent casinos, which have never financed an advertising campaign. The example illustrates how difficult it is for casinos to gain a foothold in a sector which is foreign to them. It is quite symbolic that this site, which was funded by casinos, was the first victim.

Marketing for online websites is very expensive, and the opening of the market took place while the cash flow of practically all casino groups was in the red. At the beginning of March 2011, the chairman of ARJEL quite rightly noted that in 2010, “the cost for advertising campaigns represented 94 percent of the gross gaming revenue for online operators. In these conditions it is difficult to make money, particularly if 40 percent is added for structural costs.”

The issue regarding tax cuts, in these conditions, becomes secondary. The online gambling operators in France have spent a lot—far too much, while the market is not suitable. There exists a real audience for horse-race betting, but sports betting has fallen short of expectations. In 2010, the number of players globally corresponded to the forecasts. However, their bets were half of that expected. Unattractive matches are to blame, especially for soccer.

Nearly a year after the opening of online gambling, casinos are left with the same issue they had before: the gaming they offer, slot machines mainly, are always competing with FDJ and PMU, which lost their respective monopolies but not their supremacy. And regarding poker, after the craze brought about by novelty three years ago, it turns out that in most casinos, tables can be filled only on weekends during tournaments.

Ultimately, online gambling is not as frightening as once was thought. Yet, the opening of the gambling market remains a threat for casinos, for two reasons. First, the powerful lobbying of international online operators, performed in November 2001 to convince the parliament to widen the scope of the opening of casino games, plays an important role. Second, it must be stressed that by removing the monopolies of FDJ and PMU, the state has prompted both of them to react and increase development projects.

Whereas 90 percent of gross gaming revenue for casinos is derived from slot machines, direct competition comes from lottery games and horse racing. This perspective had been underestimated by the authors of this reform.