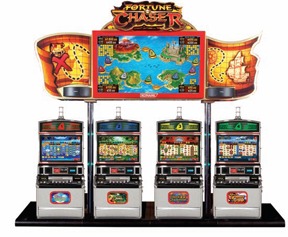 This community-style progressive bonus game comes with any of four base games—”China Shores,” “Queens Shores,” “Jumpin’ Jalapenos” and “Treasure Voyage”—linked to a giant common bonus display that depicts four islands with various stepping-stone platforms in between.

Each base game has its own specific free-spin event with multipliers, stacked symbols and wild symbols. The base games are presented with an optional “Twin Play” mode. For a 20-credit ante bet, play occurs on two five-reel, 30-line reel sets simultaneously.

Pirate tokens accumulated are shown at the top of the video screen. When five of one color pirate token are accumulated, it triggers the progressive bonus event, which is a cooperative game played out on the common video screen. Each player has a ship on the bonus screen, corresponding to his or her position on the slot bank. When the bonus is triggered, a die is rolled to determine how many spaces the triggering player’s ship moves on the board. The goal is to reach one of four progressive “islands.” A random “Jackpot Chance” event automatically moves the ship to one of the islands.

Each island displays two progressive jackpots, a Silver and a Gold, ranging from $25 and $50, respectively, for “Tropical Island” to $400 and $1,800 for “Volcano Island.” The player is prompted to select a square on a grid for the island on which the ship lands, to reveal either a credit award or one of the two progressives. The grid does not reset if a credit award is revealed—meaning the next player to trigger the bonus for that island has a better shot at one of the progressives. When a progressive is hit, the grid resets.