Could the sports betting arena of the future be—an arena? Illinois thinks it can. 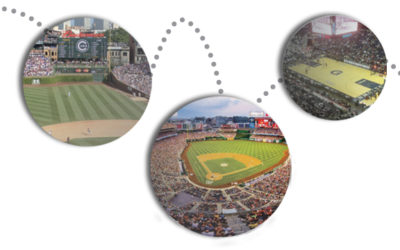 As sports betting legislation surges across the U.S. at a quickening pace, the number of states now estimated to legalize within the next three years stands at 20, according to Morgan Stanley analysts. As the new entrants join the fray, we are beginning to see a swerve in the pattern of establishments being authorized.

Early on, it was assumed, and still is in most states, that the natural heirs of the nascent national sports betting industry would be casinos.

The case beyond all question is strong. Existing casinos are already licensed and regulated by the state to conduct betting operations. They have the best existing compliance infrastructure and quick ability to firewall against abuses from cheating to underage gambling. Racetracks represent a similar existing construct, and they too are included in much legislature for the same reasons.

Yet, in recent legislation and many pending bills, we are beginning to see the appearance of a new paradigm—inclusion of sports arenas as natural homes for brick-and-mortar sports books as well as online mobile skins.

Many of these arenas are owned and operated by professional sports teams who operate under a set of regulations laid down by the leagues. Their home games generate huge crowds of passionate fans in the core demo of sports bettors. They are usually located in metro areas with good transportation infrastructure and already have diverse amenities in place: dining options for all budgets, VIP suites, merchandising kiosks. They also fill their calendars with non-sports events like major concert acts and one-off events like political conventions.

The state got something right to the benefit of partners. Here where the fans are in a gateway city like Chicago, you can generate special team passion and brand the operation in an iconic venue like the United Center, among others.

A gaming partner here will get access to the 3 million-strong fan base of the two resident pro sports leagues and the concert and special events dates staged there. The passion of sports fans will translate into eager wagers from a built-in emotion to be part of that team’s prospects.

Diversification of betting outlets will become a major issue confronting sports betting operators. Going even further, we note that Washington, D.C.’s, sports betting law permits any restaurant or bar that can pony up $100,000 for a license to get into the game and become the neighborhood bookmaker to its patrons.

So, for the industry, the question is raised: Will this expansion of sports betting sites beyond traditional sites like casinos and tracks set up a cannibalistic marketing war before the first laydowns are made? And what purpose is served if states do diversify authorized sites if they wind up in marketing wars? Those who remember the bus marketing wars of the 1980s in Atlantic City understand just how it can drain profits from operations when patrons are confronted with a dizzying array of offers.

Will all these new entities go head-to-head on giveaways? Will they keep upping the ante on free bets and other marketing exotica to poach business from competitors?

Quite the reverse. The expansion into non-traditional gaming sites is a plus for all, because it serves the time-worn marketing idea of “different courses for different horses.”

Through its early days, what has become clear thus far is that the single most valuable asset sports betting brings to a casino operation is foot traffic. It is, in a way, an ongoing special event, a vehicle long used in the tool kit of casino marketing to attract play. It certainly can’t be hold percentage. As we have already seen, historically, sportsbooks in Nevada hold anywhere from 7 percent to 3 percent of total dollars wagered. It’s not exactly roulette or slots.

So, sports betting to a casino is a great marketing tool, particularly linked to major events like the Super Bowl, the Final Four, all sports playoffs, the World Cup, the World Series, the Stanley Cup and the NBA Championship. It brings in bodies. It creates footfall. It injects revenue into food outlets, sells hotel rooms and engenders a high level of chemistry that is contagious throughout a property.

And it’s not only the bodies attracted, but who the bodies are. The average age of a Las Vegas visitor is 47. The average age of a sports bettor is 38. So the business gives casinos and certainly tracks a shot at a younger demographic—crucial these days as the traditional appeal of the slot machine and table games appears to find ever-diminishing favor among millennials.

On the other hand, sports arenas have no shortage of chemistry or regular attendance by favorable demographics. Remember, the average age of a sports bettor is 38. Attend a game or concert at a sports arena and sweep your eyes across the crowd. You’ll see lots of young—very young—-faces. Lots of pumping energy erupting on great plays. Go to an A-list concert. Put Lady Gaga up on the stage and listen to the pounding music and crowd roaring out the lyrics as the star goes through the paces.

Mainstream sports arenas already have that footfall and fan fervor built into the product. It is fairly clear that the sports betting populace divides itself between its core comfort zones. Older players, who comprise annual casino visitation, tend to be slot players, blackjack players, vacationers, conventioneers or weekend getaway visitors. Sports betting to them is a single component of a much larger pleasure-seeking experience.

Attendees of arena events, sports or concerts tend to be younger, are on property a few hours rather than overnight and are distinctly younger and more enthused in general about fandom than are casino patrons. As such, we have the classic power of gaming capitalism at work: Patrons divided by motivation, demographics, leisure time available, budget.

And in this respect, what we see is stratification of a potentially huge market common to all successful industries. In tech devices, for example, we have the dominant PC sprung loose from Microsoft. At the same time, there is a distinct sub-segment of tech device buyers who are Apple-loyal end to end. Both companies have thrived primarily because both understood this underlying principle: Nobody owns a market—they only own a segment of the market that finds their product most appealing.

And that is why I believe on balance, the diversification of outlets for sports betting beginning to show up in legislation is in general a natural consequence of how an industry goes from its nascent birth into a fully blooded, growing entity servicing distinct segments of its markets.

And in the end, an industry that found a way for a Wynn and a Circus Circus to survive and thrive in the same town over decades proves what I believe will happen as sports betting reaches those 20 states: This is an industry sorting itself out into a solid producer of total gaming leisure dollars over the next 10 years.