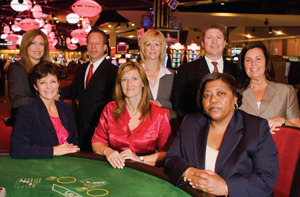 Clichés about women in the workplace range from the quaint (“She does the same thing backwards and in heels”) to the cutesy (“Sometimes the best man for the job isn’t”) to the calcified (“A woman’s place is in the house—and the Senate”).

In 2011, half a century after the women’s movement supposedly shattered gender barriers, the ascent of businesswomen to the executive ranks should be a non-story. But the lineup at SugarHouse Casino is still surprising—and impressive.

According to Hamilton, the team is weighted on the distaff side for one reason only: these professionals are the best of the bunch.

“At the time we opened, it was a rough time in the industry, and there was a lot of demand to get in here,” says Hamilton, who started as a front desk agent with Harrah’s in 1994, opened Parx Casino in Bensalem, Pennsylvania, as GM in 2009, and took the helm at SugarHouse shortly before it opened last year. “There were 30,000 applications for 1,000 jobs, and we were lucky we could choose from the very best. We just happened to end up with more women than men.”

Cook, a former day-one dealer at Resorts Atlantic City, agrees. “Given our location”—an hour from Atlantic City, and just a few miles from chief competitors Parx and Harrah’s Chester Casino & Racetrack—“we were able to draw from a huge talent pool, not just east of the Ben Franklin Bridge but in the entire country.

“Everyone here is highly experienced, but there was no goal on anybody’s part to fill a team with women. It just happened that way.”

When it comes to the casino’s performance, the numbers—and the crowds—don’t lie. While first-year gross revenues were somewhat less than the projections at about $212 million, at 11 a.m. on a recent weekday the gaming floor was already humming. By early afternoon the same day, most of the dealers were two-deep in patrons, and about three-quarters of the slot machines were occupied.

And while slot revenue was a little wobbly out of the gate (in January, the weekly win averaged $2.3 million, less than half what was forecast the previous May), the casino has since proven a worthy competitor to Parx and Harrah’s Chester, each about 15 miles outside the city. In September, SugarHouse—built on the site of an old Jack Frost sugar refinery—earned more than $9,600 per machine, well above the state average of $7,500.

The casino has also proven a table-games juggernaut, raking in more than $46 million in its first nine months. With just 46 tables (Harrah’s Chester has almost twice as many), SugarHouse ranked fifth in table-games revenue among 10 casinos in the Keystone State in its first year. In some months, it’s seen the highest per-unit return on tables in the state ($154,000 per table).

As many casino companies scale back expansion plans, SugarHouse’s bang-up inaugural year has paved the way for growth. Pennsylvania’s smallest casino—Hamilton calls it “the little engine that could”—could soon double in size, adding several dozen new tables and hundreds of new slots, along with four restaurants, a poker room, a second-floor banquet center and a six-story parking garage. The expansion, which is expected to begin next summer and be complete by late 2013, would bring SugarHouse nearer to its originally planned size, which was modified when the recession crumpled the capital market. The expansion would also add hundreds of additional permanent jobs.

Applicants for those jobs may face an unorthodox interview process. Imagine facing a panel of hiring bosses during a tough economy in a challenged industry and being asked, “What would you rather have: a million dollars, or the ability to fly?” That’s one of the questions Hamilton and company asked past interviewees—and while there was no right or wrong answer, the question was not wholly whimsical, and the answer was not insignificant.

“We wanted people who could think on their feet,” Hamilton says. “We wanted people with a sense of humor, people with energy and enthusiasm, who would hear the question and laugh, not panic.” (Note: Most people said they would choose to fly, first because it would be more fun, and second because they could make more than a million dollars that way.)

“We were interviewing for personality,” Cook says. “We took people outside their comfort zones, caught them off guard. This was all about the culture Wendy wanted to create. It came down to who was going to best fit the culture and really understand how we wanted to operate differently.”

The word “culture” is a popular one among the SugarHouse brass. Asked to define the term, Hamilton cites the bestselling business guide Gung Ho by Ken Blanchard and Sheldon Bowles. Subtitled “Turn on the People in Any Organization,” the book—which like Blanchard’s other books is presented as a parable—suggests ways to succeed in business by taking care of people first. It starts by doing away with the cog-in-the-wheel structure of a lot of large companies.

“We’ve all worked for good, big organizations, and we’ve found that it can be tough on people to be a little piece of a big thing,” Hamilton says. “Whether as an executive or on the front lines, you as an individual can have trouble feeling important every day, because ultimately the thing is so big it moves on without you.

During the casino’s first-anniversary celebration—a block party on the Delaware River complete with Philly-style cheese steaks and soft pretzels, fireworks, and music by native sons the Hooters—Human Resources VP Patricia Tuck spent most of her day on the parking lot in a T-shirt flipping burgers.

“We’re all hands on deck,” says Tuck, who rose from hotel desk clerk to executive status at both Harrah’s and Penn National Gaming before joining SugarHouse. “Our employees are not just employees, but part of a family. We try to think about what everyone’s experience is, from executive to line-level employee. Everyone is important, and no one is more important than anyone else.”

While it all sounds a bit warm and fuzzy—maybe a little bit girly—it’s the exact opposite of empty sentiment. It’s good business, and the impact of such a philosophy can be profound. When SugarHouse executives learned that an employee was dealing with violence at home, they helped her and her child relocate to safe housing. When they discovered that another staffer could not pay past-due utility bills (the employee had been underemployed for several years), they quietly made sure the balance was paid and the power went back on.

“When those things happen, besides the emotional situation, the financial aspect oftentimes is out of their reach,” Tuck says. “We can help with that stuff—with transportation, lodging, any of that. We help to defray those expenses to take one less stress out of their lives.”

That built-in support system also helped a dealer who lost his 26-year-old son in the August attack on U.S. Navy SEALs in Afghanistan. Management and employees contributed unused vacation time and also raised $12,000 so the grieving father could take a few months off.

“We provided private shuttle buses to the funeral,” says Tuck, “and Rose arranged for other employees to work that day so the people on his shift could go to the service. We try to do the small things that make a big difference.”

Even the table-games department has a “kinder, gentler feel,” Hamilton says, with new dealers pairing with old pros to make their break-in a little easier.

As for accessibility to the higher-ups, that’s a given, says Cook. “There is a hotline here that anybody can pick up and they will reach Wendy or Tricia. They may have to leave a message, but one of these ladies will call them back. I have never worked anywhere where everybody has a direct line to the vice president of HR and the general manager. Never.”

Adds Tuck, “Our front-line guys are our best asset. They’re really smart and really talented, and they know better than any of us what’s causing a line to back up or a customer to complain. You can sit in a conference room and make policies and make programs but unless you’re on the job for hours executing it with customers you’re not in touch with it. We make them part of everything we do here.”

The all-for-one approach has had a lasting positive effect, Hamilton says. “If tough times hit, a lot of organizations would say, ‘That’s really too bad, but don’t bring it to work. Just keep smiling at our customers.’ We feel if you made it in here, you’re really special and we want you to be here forever. So what’s it for us to pay for a utility bill? And you know what? That becomes the most loyal employee you ever met in your life. They can’t wait to do their best for you.”

The rank and file at SugarHouse repaid the compliment this summer, nominating their company as one of the Philadelphia Business Journal’s “Best Places to Work.” The casino was named among the top 50 employers in the “extra-large” category—alongside behemoths such as Comcast—based on employee scores.

For Hamilton and her colleagues, it’s all summed up in Gung Ho in a chapter about teamwork called “The Gift of the Goose.”

“It’s about how geese fly in a ‘V’ formation,” Hamilton says. “They constantly change position, with each one honking to encourage the one in front. They’re always cheering each other on. It helps to make the flying easier.”