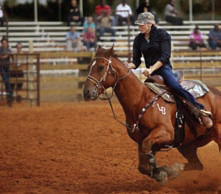 With politicians continuing to debate the future of gambling in Florida, a state appeals court has thrown a monkey wrench into the works. Last month, the 1st District Court of Appeals ruled 2-1 that the a state regulator must issue a license for slot machines to Creek Entertainment Gretna, which opened a barrel-racing course in 2011.

The facility offers flat-track horse racing, simulcast betting and poker, as permitted by state law. But when voters in Gadsden County authorized slots, the Department of Business and Professional Regulation refused to issue a license, and Creek sued.

The refusal was based on a legal opinion by Attorney General Pam Bondi that state legislators did not mean to expand slot machine gaming beyond Broward and Miami-Dade counties, which were authorized to offer racetrack slots in a 2004 constitutional amendment approved by the voters.

Judge Robert Benton ruled that regulators did not base their denial on any errors or omission in the application and instead relied on Bondi’s interpretation. Gadsden County, he said, was allowed to hold the referendum under a wide-ranging law passed by legislators that authorized the current agreement with the Creek tribe.

Judge Scott Makar, who worked for Bondi at the time of the ruling, disagreed.

“The alternative view, which would restructure the statute and change its meaning to allow slot machines to be deployed on a statewide basis without any clear authority to do so, is inconsistent with principles of statutory and constitutional construction, legislative intent, and the history of laws prohibiting slot machines in the state,” Makar wrote.

The court has asked the Florida Supreme Court to make a final decision.