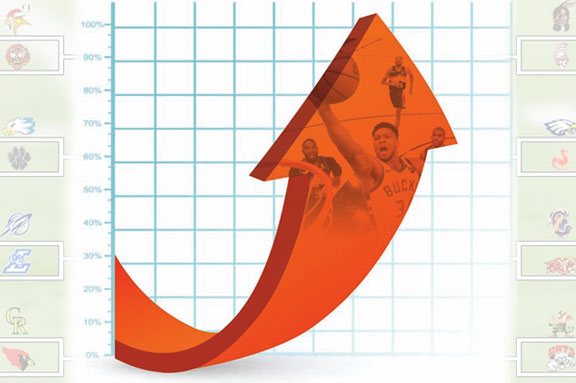 Celebrate one blockbuster, await another.

That’s how IGT and Kambi can assess milestones in the suddenly-booming sports-betting industry.

These companies, among others, reap the rewards of significant foresight. By investing ahead of sports-betting legalization in recent years, they ascend along with this gaming-market sector.

Legalized sports markets blossom throughout the United States, expanding the marketplace for International Game Technology. Two states positioned near each other are set to blow the roof off of revenue projections.

New Jersey has been the online sports-betting bellwether, from launching the bid to topple the federal sports-betting ban in 2018 to subsequent quick deployment throughout the casino industry and racetracks.

The Garden State shattered industry records, becoming the first to surpass $1 billion monthly handle in September. It exceeded the total again in October and November. December’s numbers were expected to make it four straight, and year-long handle will be finalized in the vicinity of $10 billion.

That forecast would have shocked proponents of legalized sports wagering when they fought for its acceptance in the United States. But that’s the vicinity Joe Asher, the IGT president of sports betting, projected for it several years ago.

As CEO at William Hill U.S., now part of Caesars Entertainment, Asher directed his company’s efforts to install brick-and-mortar books in Atlantic City ahead of competition, in 2018. The surge of mobile betting amplified the importance of being in position to take legalized sports bets.

“I’ve been saying for years that I think New Jersey is a $10 billion sports betting market in terms of handle, based on the population and the sports culture in the area,” he says. “The fact that New Jersey is on track to achieve that is not at all surprising. We’ve seen that the customer demand for sports and sports betting is very strong and it will continue to be strong for the foreseeable future.”

It is a testament to sports betting that New York operators lined up for the privilege of doing business despite a staggering 51 percent tax rate. This increases the need to open one’s doors quickly, especially before the lucrative NFL and college football seasons.

A casino must turn to a network of well-connected partners in order to hit the ground running.

The synergy between IGT and these outfits facilitates entries into new markets. It has already worked magic in New York. Major bets and seven-figure daily handles were reported as the state launched in time to capture the end of the NFL regular season, the college football national championship and the NFL playoffs.

The impact of an entire NFL and college football campaign starting in late August will be monumental.

“The introduction of mobile sports betting will bring an avalanche of customers to the four mobile operators there,” Asher says. “We’ll see what sort of impact it has on the New Jersey numbers.” 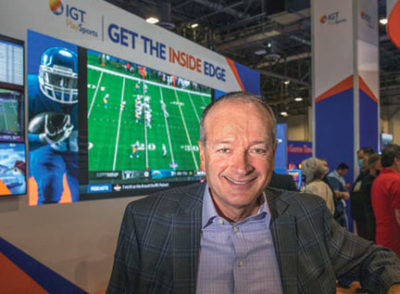 “We’ve seen that the customer demand for sports and sports betting is very strong and it will continue to be strong for the foreseeable future.” —Joe Asher, President, Sportsbetting, IGT

New York represents one of the major states recently launched for mobile sports betting in the United States. Some industry estimates place the sports-betting boom near the halfway point. Asher believes the heyday is far younger than that.

“We have not yet arrived at the halfway point of the U.S. sports betting expansion,” he says. “We’re still in the early innings—probably the second inning. Many major states such as California, Texas, Florida and Ohio remain to go live, and New York mobile betting is just getting started.

“We’ll continue to see business expand as new customers sign up for accounts and bet,” he adds. “Additionally, media companies, professional sports leagues and individual sports teams continue to increase their involvement in the business, which will only drive further growth.”

Asher notes that there is a heavy focus on marketing today, but over time it will shift more toward product and the creation of more enjoyable betting and watching experiences. IGT’s PeakBarTop Flex is designed exactly for these opportunities, he says, as it allows sports fans to enjoy other casino games such as slots and keno, while also watching sporting events and placing bets.

The company’s big performer in the sports-betting space remains the PlaySports platform. IGT will continue to invest significantly in the product.

Here are a few “by the numbers” quick facts on IGT PlaySports:

The platform is considered one of the most influential technology stacks in the rapidly growing and evolving U.S. sports betting market. In the three-plus years since the U.S. Supreme Court repealed the Professional and Amateur Sports Protection Act, IGT has emerged as a leading B2B sports betting technology provider in the U.S.

IGT’s PlaySports technology is available at the FanDuel Sportsbook at The Meadowlands Racing and Entertainment, the highest-volume sportsbook in the U.S.

Unlike other sports betting platform suppliers, IGT has a GLI-approved solution that is backed by IGT’s pedigree in land-based casinos, company officials indicate. IGT developed the PlaySports stack and service team specifically for the retail, mobile, online and mobile on-premise sports wagering opportunities of the U.S. market.

The company’s PlaySports customers can also benefit from compelling and original promotional bets, exclusive parlay and combination wagering and player retention and acquisition strategies designed by the team’s content managers.

Now live in several states, the PlaySports PAM is delivering an intuitive user experience that can effectively drive customer acquisition and retention through targeted sports betting promotions—ultimately strengthening the operator-player relationship. Unlike the iGaming PAMs that originated outside the U.S., IGT’s PAM was built from the ground up, specifically for the unique challenges, opportunities and demands of the U.S. sports betting market. Because it is a modular component of the PlaySports platform, the betting engine’s offer creation and rewards availability are second to none.

Another key differentiator for the PlaySports platform is its compatibility with IGT’s portfolio of self-service betting technologies.

Adding self-service betting options to a retail sportsbook environment provides operators choice and convenience for how and where they offer sports betting, and gives players added privacy while placing wagers.

Another State, Another Success

It’s been a busy post-PASPA period for Kambi. The London-based company is a leading leading B2B provider of premium sports betting technology and services to the regulated global betting and gaming industry, with dozens of partnerships across six continents.

Kambi was well positioned to power United States operators immediately after sports betting was legalized in the United States.

Subsequent Kambi highlights include opening a U.S. office and leading the group of heavy hitters helping New York open the online sports-betting age during the first week of January. 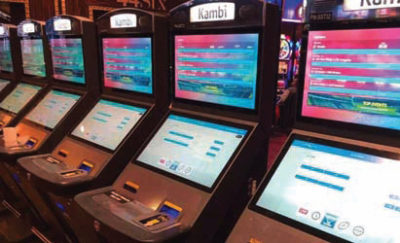 Kambi headlined one of two groups that earned a coveted 10-year mobile sports betting license at the end of 2021. The highest-scoring group during the process was the Kambi-led consortium, which included its partner Rush Street Interactive, operator of an on-property sportsbook at Rivers Casino and Resort in Schenectady, New York, where it took the first legal on-property bet in the state in 2019.

Although operating in the state includes that high tax rate, New York will be a huge market for mobile sports betting for years to come, according to Sarah Robertson, Kambi’s vice president of sales. She says the company will consider it a major priority.

Robertson says that the New York operation, combined with recently signed agreements with tribal operators Desert Diamond Casinos and Saginaw Chippewa Gaming, will be important in Arizona and Michigan.

This coincides with good news north of the American border for Kambi.

Back in June, the Canadian Senate passed Bill C-218 to allow single-game sports wagering in the country. Similar to the United States, conducting single-event sports betting offerings will be determined on a province-by-province basis starting with its largest province, Ontario.

The Ontario market could be opened to operators and providers sometime in the first quarter of 2022. If Ontario were a U.S. state, it would be the fifth largest with a population of 14.7 million residents (almost identical to New Jersey’s), which is almost 40 percent of Canada’s population.

Ontario is also home to the most professional and amateur sports organizations in the country with three CFL teams, two NHL teams, and one team in each of the MLB, NBA, MLS and NLL. The market has huge potential, and all the major players in the industry will be waiting to sink their teeth into it.

“We want to be ready before day one,” Rush Street Interactive CEO Richard Schwartz said of plans to launch the BetRivers product in Ontario, on a panel at the recent SBC Betting on North America Summit.

Kambi was able to unveil major enhancements to its Game Parlay product in preparation for NCAAF bowl season and the College Football Playoff, providing an NFL-style offering of combinable bet offers and player props.

The latest improvements to Kambi’s Game Parlay product for college football include an extension to the number of combinable bet offers available, which now stands at more than 20 and is comparable to those offered by Kambi for the NFL.

The product features a market-leading number of player props markets for both single and multi-game parlays, with bet offers including Total Passing/Receiving/Rushing Yards by the Player and Anytime/First/Last Touchdown Scorer.

The multi-year partnership will provide AI with access to Kambi’s best-in-class betting solutions, from compliance provision and odds compiling to customer intelligence and risk management, all built on Kambi’s proprietary software platform.

AI’s significant online and mobile presence, including the iconic, 127-year-old Daily Racing Form, a leading provider of premium data and authoritative editorial coverage to horse racing and sports enthusiasts in North America, and DRF Bets, one of America’s fastest-growing online and mobile wagering platforms, will enable it to provide Kambi’s technology and services instantly to customers.

The multi-state agreement will introduce the Kambi-powered sportsbook online in Iowa before launching in additional states throughout 2022 and beyond.

“We are thrilled to work with the talented team at Affinity Interactive to provide our leading software to sports enthusiasts across the U.S.,” says Kristian Nylén, CEO of Kambi. “This agreement is an exciting opportunity to showcase the strength of our product and leverage our experience to succeed in the competitive sports betting market. The combination of Kambi’s advanced technology, DRF Sports’ multimedia information capabilities and Affinity Interactive’s regional casino assets makes for an enticing sports betting proposition.”

“This is an exciting time for Affinity Interactive and the sports betting industry,” says James Zenni chairman of Affinity Interactive, “and partnering with Kambi will allow us to capitalize on a number of compelling opportunities and position our businesses for shared success. This is the first step in our strategy of rolling out the DRF Sports brand to online customers for sports betting and iGaming.”

The sports betting industry and those who service it enjoy an unprecedented growth period. It’s a mini-version of the nationwide growth of legalized casino operations that began in the 1990s.

Kambi and IGT are not the only companies enjoying this ride.

But their commitment demonstrates the respect sports-betting products command at major establishments.