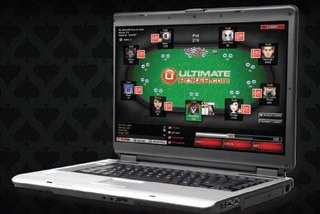 Although American gamblers contributed billions of dollars to the revenues of online gaming operations based in international locations, they never had the chance to wager legally on sites operated within the United States. Until April 30.

Three states have legalized online gaming/poker, but Nevada won the race to get the first online commercial poker operation up and running. New Jersey and Delaware have both indicated that their online casinos will open by the end of the year.

But the spotlight fell on Nevada last month, specifically the Ultimate Poker site, which opened for business. Ultimate Poker is a brand of Ultimate Gaming, itself a subsidiary of Fertitta Interactive, owned by Station Casinos and former Golden Nugget owner Tom Breitling.

The site is limited to players based in Nevada. The technology surrounding UltimatePoker.com assures that the players are located within the borders of the state and goes into much more depth when it involves establishing the players’ identity. Prospective customers are required to provide their Social Security numbers, as well as verification of a Nevada address (a hotel works just fine, thank you).

Breitling says the site will be a model for companies participating in the U.S. market.

“It’s an opportunity to show the world how to properly run online poker,” the Ultimate Gaming chairman said.

Breitling says the company was pleased by the unexpected response, which included a front-page story in USA Today and numerous national TV appearances by Ultimate Gaming executives.

“The numbers exceeded our expectations,” says Breitling. “We’ve had multiple games going ever since the launch and our cage has been busy accepting fund transfers.”

To open an account, players must deposit money at the cage in any Station Casino in Las Vegas or transfer money in $300 increments from their bank accounts. Breitling says the company will soon announce an arrangement with a credit-card company to be able to move money through those channels.

Nevada isn’t seen as a major online poker market, however. With only 2.8 million residents, the state could hardly host a viable critical mass of poker players unless it could tap into the 48 million people who visit the state each year. But how many of those people will forgo gambling in a casino to gamble online?

While most customers have been setting up accounts via visits to the cages of the 12 Station Casinos in Las Vegas and through bank transfers, Breitling says he’s been surprised at the number of accounts being set up from outside Nevada, even though they can’t play until they are physically within the state.

“I think that’s a testament to Las Vegas,” Breitling told the Las Vegas Review Journal. “People are planning their trips and are saying this will be a part of that trip.”

In just three days, Ultimate Gaming CEO Tobin Prior suggested that the site had already dealt 100,000 hands and had 50 games running at night.

“I would say we were the largest poker room in the state at that hour,” he said.

It hasn’t been all smooth sailing for the poker site, however. Verification of age and geo-location have been issues (UltimatePoker.com does not have an agreement with Verizon, nor does it offer services for Apple computers, limiting its penetration). Technical glitches have also been experienced, but Breitling says the company has concentrated on customer service to minimize those problems.

“Just because we’re pioneering new ground, people still have customer service inquiries,” Breitling said. “We know they are gravitating toward a trusted website.”

With that in mind, Ultimate Gaming executives point out that their current offering is a stripped-down version of what it will be in the future. Although the site has already offered tournaments, the analytic tools offered by offshore operators are missing, as are some of the popular casino games, such as seven-card stud.

Some also claim that “spoofing” the Ultimate Poker site is possible since the company uses mobile phones for location verification, while you play on a computer.

UltimatePoker.com is considered by the Nevada Gaming Control Board as a beta test, which means that nothing can be changed for 30 days, when the problems/challenges will be evaluated.

A.G. Burnett, the chairman of the Gaming Control Board, says some of the technical problems are a result of everyone “testing” the site.

Meanwhile, when it comes to launching online poker in Nevada?which has been touted as the wave of the future in gaming?MGM may be saying, “Not so fast.”

MGM Chief Financial Officer Dan D’Arrigo told the Chicago Tribune the company is still weighing the value of online internet poker in Nevada, which would be limited at first to intrastate wagers.

“We have to make an assessment on the cost to operate in that space,” D’Arrigo said. “We haven’t ruled it out, but we haven’t given it a green light either. We’re not going to be the first or a pioneer from the state’s perspective.

“Our preference is for something to be done at the federal level,” continued D’Arrigo. “We’re focused on these state-by-state initiatives, but it makes it more challenging and more complicated… Hopefully states will compact with one another and that will create liquidity and critical mass.”