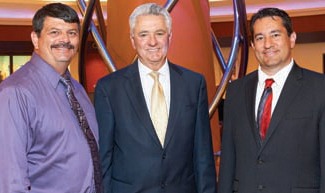 Homer A. Mandoka, Tribal Council chairman of the Nottawaseppi Huron Band of the Potawatomi, recently announced FireKeepers Casino Hotel President R. Bruce McKee will retire at the end of the year. He will be succeeded by Brian Decorah, who recently was named chief operating officer. The property is located in Battle Creek, Michigan.

McKee, who has led FireKeepers since it opened in 2009, will remain through the end of 2015.

In his 35-year career in the casino industry, McKee held numerous executive positions, including chief operating officer and general manager at Harrington Raceway Casino in Harrington, Delaware, and a variety of positions over 10 years at Trump Hotels and Casino Resorts, Inc.